Maybe you’re too young to remember why The English Beat has “English” in its name. If you’re not, you know it was because there was already an American band called The Beat that had formed the year before, in 1977, in Los Angeles. By the time the British band The Beat, fronted by Dave Wakeling, was formed in 1978 in Birmingham, Paul Collins was already established. But tit for tat, when Collins toured Europe, his band was known as The Paul Collins Beat (or sometimes Paul Collins’ Beat). This little bit of trivia is brought to you because The English Beat returns to SLO Brew on Saturday, Dec. 1, for what should be an awesome reunion of sorts for ex-pat SLO locals and old college pals who love the band as much as I do. 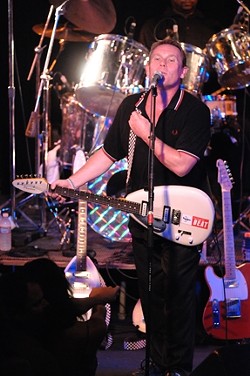 In fact, a whole slew of Cal Poly folks who normally hold an annual Christmas party out at Olde Port, oftentimes with Wakeling and company performing, decided to move their party to SLO Brew, which means get your tickets now if you want to go! The doors open at 7 p.m. for this 21-and-older show. Tickets—available at Boo Boo Records and ticketweb.com—cost $21 presale (plus some fees) or $23 at the door.

Before then, SLO Brew kicks off its week with Watsky and opening act A-1 playing Friday, Nov. 30 (7:30 p.m.; all ages; $12 presale or $13 at the door). George Watsky is a rapper, writer, and performer from the Bay Area who now lives in L.A. The versatile lyricist moves effortlessly between silly and serious, and as a college freshman he toured the country and played more than 150 universities.

On Sunday, Dec, 2, Lakes returns to the club (7 p.m.; all ages; $10 presale or $12 at the door), with opening acts American Dirt and Chris Beland. Lakes features songwriter Seth Roberts, who bears his heart in his music. American Dirt says, “We play honest American rock’n’roll that veers between garage rock and country like your grandpa on a moonshine run in a T-Bird.” Beland hails from the Pacific Northwest but recently relocated to SLO Town. His most recent album is called Danger of Love.

On Wednesday, Dec. 5, Diego’s Umbrella returns to perform its patented brand of Mexicali Gypsy pirate polka (7:30 p.m.; 21-and-older; $10 presale or $12 at the door) with opening act Vokab Kompany, who does a kind of electro-hip-hop-soul-funk thing.

You may want to get your tickets now for Taj Mahal, who, under the aegis of SLO Brew, will perform an intimate sit-down concert in the historic Fremont Theater on Thursday, Dec. 6 (doors at 6 p.m.; all ages; $40 presale or $40 at the door, if any remain). This extraordinary musician and two-time Grammy nominee is a classic American bluesman and roots music artist who never lets his sound be confined by tradition or convention. Country, reggae, rock, soul, R&B, and world music sounds organically sneak their way into his music. He’s a stunner!

Alligator Records recording artists Rick Estrin and the Nightcats are classy dudes, especially dashing Rick, who likes to dress to the nines in sharkskin suits with his pompadour styled up and praying to the blue moon. 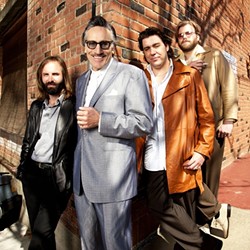 The celebrated blues act—known as Little Charlie and the Nightcats until Charlie Baty decided to retire from touring—is still a powerhouse of gritty roadhouse rock and blues. Their new album, One Wrong Turn, is filled with hip-swiveling, head-bobbing, strut-walking, harmonica-driven barnburners—raw energy, raw sexuality, and raw talent! Norwegian guitarist Chris “Kid” Andersen, who has backed Charlie Musselwhite in the past, replaced Baty.

“Kid’s a fearless nut on the guitar,” Estrin said in press materials. “He’s really the only guy who could fit in with us.”

This is a great band together for 30 years and has recorded nine albums, and they’re amazing to behold. On Saturday, Dec. 1, they headline the next SLO Blues Society concert at 8 p.m. in the SLO Vets Hall (21-and-older; $20 at the door; free dance lessons at 7:30 p.m.). The awesome local act The Strata-Tones will open the show. Blues lovers, don’t miss this one!

New Age for a new year

Check out the new age sounds of the Windham Hill Winter Solstice Concert in SLO’s United Church of Christ on Saturday, Dec. 1, at 7 p.m. (tickets are $20, available at Boo Boo Records or brownpapertickets.com).

According to press info, “These master musicians have toured nationally together for the past 10 years in the beloved Winter Solstice music series that sold over eight million records. Warmth, humor and stunningly pristine performances abound. They love playing together, and the season is the focus. Barbara Higbie is a Grammy-nominated classic artist from the Windham Hill label. Lisa Lynne is a multi-instrumentalist and performer who has gained world recognition for her original music featuring her Celtic Harp. She was recently chosen by LA Magazine as one of the Top 50 most inspiring women. George Tortorelli is a master of world flute and percussion. He is known as ‘Medicine Wind’ for the healing sound qualities of his timeless sound. Aryeh Frankfurter has been delighting audiences around the globe with his passionate and evocative music.”

This concert is sponsored by SLOfolks.

I’m dreaming of a Celtic Christmas!

This year’s special guests are vocalist is Christa Burch and the Rosemary Turco Irish Dancers, who with Molly’s Revenge will present an evening of music, song, and dance associated with the festive season: “The joyous music of Christmas, played with a Celtic twist!” said the band.

Ring in the holidays Irish style!

Steve Key’s Songwriters at Play kicks off on Thursday, Nov. 29, at SLO Down Pub with headliner Luis Oliart (6:30 p.m.; all ages; pass the hat). The bluesman and alt-soul artist’s latest CD, Broken Chains, gets steady airplay on The Krush 92.5FM.

Frog and Peach has horn player C-Money and the Players Inc (C-Money, aka Chris Welter, and some of the band members also play with Slightly Stoopid) playing on Thursday, Nov. 29, at 10 p.m. The band has been touring steadily up and down the West Coast over the past two years, squeezing in gigs between Slightly Stoopid shows, and this is their first stop in SLO. They play a fresh-sounding mix of jazz, funk, rock, hip-hop, and reggae. Killer musicianship!

The Cal Poly jazz ensembles present their Fall Jazz Concert at 8 p.m. Friday, Nov. 30, in the Spanos Theatre. The University Jazz Band I will perform a jazz version of the rock classic “Moondance,” originally recorded by Van Morrison. The University Jazz Band II, as well as a jazz combo, will also perform. Tickets (parking fees included) cost $12 for the public and $9 for senior citizens, students, and Jazz Federation members. Call 756-4849.

Get your Christmas spirit going on Saturday, Dec. 1, when the Cal Poly Choirs present “A Christmas Celebration” at 8 p.m. in the Performing Arts Center’s Christopher Cohan Center. PolyPhonics, The University Singers, the Early Music Ensemble, the Cal Poly Brass Ensemble, and the popular a cappella group Take It SLO are all scheduled to perform. Hear everything from “The Lamb” by Ralph Vaughan Williams and “A Christmas Carol” to “Chanukah Fantasia” by Coreen Duff and “Ma Navu,” a traditional Hebrew folkdance melody arranged by Shira Cion. Tickets cost $12 and $14 for the public and $9 and $12 for senior citizens and students. New pricing includes all Performing Arts Center fees, and parking is now free. Call 756-4849 for tickets.

The next day at D’Anbino—Sunday, Dec. 2—check out Sharp Three (4 p.m.; 21-and-older; $10), a trio performing classical and flamenco with snippets of folk and rock, all with an Asian flavor!

Harpist Aurora Denny will present a concert of Celtic harp music, together with some holiday favorites and a smattering of other genres of music, on Sunday, Dec. 2, at 4 p.m. at St. James Episcopal Church, 14th and Oak Street, Paso Robles. Concertgoers are invited to stay for tea and converse with the performer. Admission is a free-will offering.

On Sunday, Dec. 2, at 7 p.m., the Steynberg Gallery will be host to the Italian-Gypsy folk sounds of Taluna ($20; call 547-0278). “A common thread runs from Dubrovnik to Vukovar, passing through Belgrade, touching lightly Tirana and Athens,” according to the group’s bio. “A thread flowing underwater touching Brindisi and passing through Mediterranean, skimming the Andalusia coast. A thread moves on guitars and violin chords, rebounds on leather drums, curving on the accordion keys. Knot of these connections, these are Taluna, a band formed by four musicians with different roots and backgrounds, moving their first steps in 2008 in Turin, Italy.”

Master craftsman and luthier Mark Frazier must be trying to get on Santa’s nice list.

He’s building a custom guitar, which he’s raffling off for $10 tickets to benefit the Atascadero High School Marching Band, where his son plays sax and trumpet!

He’s created a blog so anyone can follow his progress. When I checked in on Nov. 27, he’d devoted 39 hours to the project and was displaying an image of the fretboard and headstock inlays (gorgeous!).

Visit ahsbandguitar.blogspot.com to check out his ongoing progress. You can also contact the band raffle to arrange ticket purchases through the website.