What to say about the right Reverend Horton Heat? His publicist has called the good reverend the “biggest, baddest, grittiest, greasiest, greatest rocker that ever piled his hair up and pounded the drinks down.” That’s a start! Perhaps the greatest psychobilly artist of all time (or at least right up there with the Cramps), he’s built a reputation as a stellar showman: hilarious, irreverent, and wholly manic. 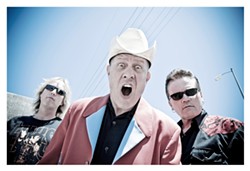 What you get at a Rev. Horton Heat show is a heapin, helpin’ of unhealthy odes to excess, or, as his press materials claim, “gonzo celebrations of sex, drugs, booze, and cars.”

Or how about his simple declaration “Baby I’m Drunk”: You don’t have to remind me, I smell like a skunk. Excuse me baby but (hiccup) I’m drunk.

All this might be making you wonder how he got his moniker.

“Well, there used to be this guy who ran this place in Deep Ellum, Texas who used to call me Horton—my last name is Heath,” explained the Rev. “Anyway, this guy hired me and right before the show he goes, ‘Your stage name should be Reverend Horton Heat! Your music is like gospel’ ... and I thought it was pretty ridiculous. So I’m up there playing and after the first few songs, people are saying, ‘Yeah, Reverend!’ What’s really funny is that this guy gave up the bar business, and actually became a preacher! Now he comes to our shows and says, ‘Jim, you really should drop this whole reverend thing.’”

Having since embraced his gifted persona, don’t be surprised if he falls into a mock sermon in the style of a roadside tent revivalist preacher.

Hailing from the heart of America’s Rust Belt, the Goddamn Gallows drifted across the states and landed in Portland, where they developed their sound, and later moved to Los Angeles, “where they lived in abandoned buildings, squatter camps, storage units, and shoebox apartments,” according to press materials.

The band landed on Earth in 2008, and according to their bio, “Planet Earth in the year 2008 must look like a pretty strange, messed-up place to an outsider. From election-year sensationalism, global warming hysteria, and widespread warfare to reality show overload and the latest celebrity meltdowns caught on film, it may seem to some that The End is imminent. But there’s hope for the human race. Just ask the extraterrestrial members of Valient Thorr, the rock’n’roll saviors from Venus who crossed the solar system to warn Earthlings about the error of our ways, delivering a message of redemption wrapped in rock’n’roll, with pounding drums and shredding guitar licks. The grizzled time-space travelers may look like a chapter of the Hell’s Angels, but there’s much more to this band than meets the eye. Their combination of heavy rock’n’roll and thought-provoking lyrics gives their legions of fans—dubbed the “Thorriors”—food for thought through their staggeringly productive output.”

According to vocalist Valient himself, “Our live show is where it’s at. No one can deny that. We play all over the world, with kids singin’ our songs, and they don’t even speak English! It makes you realize how small the Earth has become through the Internet. I might be from another planet, but I know the language Earthlings speak, and it’s definitely rock’n’roll. We’re just getting started. I got some last words, but I hope I don’t have to say ‘em for a good long while.”

A 2-year-old lad named Bentley Wilson needs life-saving surgery, so The Strata-Tones to the rescue! On Friday, July 6, from 7 to 10 p.m., the Z Club is host to a fundraising concert by SLO County’s hottest R&B act, the Strata-Tones, who just released their debut album, Dressed Up to Fess Up.

The band plays some classics, but there’s plenty of originals featuring music by Krupnik and lyrics by McCracken and Johnson, songs that fit seamlessly into the R&B tradition, with wholly engaging lyrics, like this little sample from “Bebop Baby”: You know how all those girls thinkin’ they’re so out of sight? Pushed up, low-cut, looking tight. Out on the town, tryin’ to make some time. We know it’s all right baby, ain’t no crime.

The album is getting airplay on blues radio stations around the world, and the kudos have come fast and furious. Sheryl and Don Crow of the Nashville Blues Society gushed, “The Strata-Tones have taken traditional blues and given it a contemporary twist. With a powerhouse vocalist and an irresistible backbeat that can’t be denied, enjoy Dressed Up To Fess Up tonight, and be sure to bring your dancin’ shoes!”

See this band live, and bring some extra money for a 50/50 raffle, with proceeds going to the Wilson family. A $10 donation is requested at the door.

You’ve seen the fireworks, you’ve eaten the hotdogs, so now it’s time to celebrate one of the most important things about our beloved country: its music!

On Friday, July 7, The Old-Time Fiddle and Banjo Show will play bluegrass, country, and acoustic Americana music at Haven Wine
Bistro starting at 7 p.m. on their outdoor patio ($5).

The Old-Time Fiddle and Banjo Show is, as their bio suggests, “a loose confederation of well-known pickers and sawyers from several Central Coast bands that come together to play local events. Rotating members include Amber Cross (guitar), Gary Arcemont (fiddle/banjo), Jerry James (banjo/bass), and Stuart Mason (mandola/guitar). They have many years of music experience among them, as members of Yo Pitzy Jug Band, Molly’s Revenge, Little Black Train, Rattlesnake Creek, Foggy Bay String Band, and others. They call it old-time music but the repertoire spans Appalachian fiddle tunes, early bluegrass, country blues, and even Irish tunes [Close enough to America!], all of it sung in old-school style around a single microphone. Spine-tingling harmonies, sing-alongs, and a traditional minstrel variety show are regular features of the Old-Time Fiddle and Banjo Show.”

“Antique pop” artists Victor & Penny return to the area on Thursday, July 5, with an 8 p.m. show at Linnaea’s Café. Their sound—featuring ukulele and guitar—sounds like the music of the ’20s and ’30s with a modern twist. The charming and charismatic performers created unique arrangements of modern tunes as well as clever original songs. The duo is Jeff Freling of the Chicago Blue Man Group who attended Berklee School of Music and Erin McGrane of the cabaret group Alacartoona and George Clooney’s film Up In The Air. Don’t miss them!

According to Eden’s Bliss, they’ve “reached an organic medium between such influential bands as Red Hot Chili Peppers and Incubus, and bands like The Strokes and Coldplay.” On Saturday, July 7, at 8 p.m., in Linnaea’s Café, “We will be performing stripped down unplugged versions of songs off the EP Never Odd or Even, as well as a unique selection of covers by bands such as Young the Giant, The Boxer Rebellion, The Mayfield Four, and Walk the Moon,” said front man Brandon Hafetz. These guys could be heading for big things, so check them out in this intimate concert.

If you miss the Good Old Days, look no further than Counterpoint, which will perform well-loved songs from the 1930s to the 1980s by artists such as Frank Sinatra, Ella Fitzgerald, James Taylor, Christopher Cross, Ambrosia, Doobie Brothers, Roberta Flack, and others on Saturday, July 7, from 8 to 10 p.m. at D’Anbino Vineyards & Cellars ($10 admission; $5 for record club).

Steve Key’s Songwriters at Play showcases feature a couple terrific performers this week. Headlining the Sunday, July 8, show at Sculpterra (1 p.m.; all ages; pass the hat) is fast-picking Justin Farren, who’s been called a “storyteller with an impeccable voice, a guitar, and a head full of funny, tender, and engaging observation.” Then on Tuesday, July 10, at Kreuzberg, NYC’s lip-trombonist Lipbone Redding returns (6:30 p.m.; all ages; pass the hat). For the past 15 years, he’s traveled the world with his guitar, delivering soulful singing, raucous humor, beat-boxing, and his patented astonishingly realistic lip-tromboning. Spanky Baldwin, Gary Garrett, and Alex Nishi are also billed at this show.

San Antonio-based reggae act Sol Tribe is launching its debut tour westward this summer and will be playing at the Frog and Peach on both Sunday, July 8, and Wednesday, July 11. If you like SOJA, Rebelution, The Green Children, Pacific Dub, Tribal Seeds, these guys are right up your alley. ∆