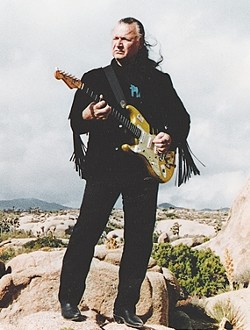 There are monster guitarists and then there’s Dick Dale, the proto-monster, a guy who plays so hard and so loud he had to have extra thick guitar strings manufactured to account for his aggressive style.

The “King of the Surf Guitar” single-handedly invented surf music in the ’50s and began a series of standing-room-only weekend concerts at Balboa’s famed Rendezvous Ballroom, where upwards of 4,000 screaming fans packed themselves in sardine-like.

Dale was also one of the first players of the Fender Stratocaster Electric Guitar. He met Leo Fender, who asked Dale to play his new creation, and the minute Dale picked up the guitar, Fender broke into uncontrolled laughter and disbelief because Dale, a lefty, played the right-handed guitar upside down and backwards, changing and transposing the chords to account for the upside-down strings.

After a long and storied career, Dale’s playing fell out of favor, but in 1994 when Quentin Tarantino released Pulp Fiction and used Dale’s instrumental “Misirlou” on the soundtrack, a whole new generation of fans discovered the sheer awesomeness that is Dick Dale.

And while we’re talking about Downtown Brew, here’s the rest of its week:

On Friday, June 19, they’ve got a quadruple header in store for you, when Truth & Salvage Company heads a rock’n’country show that also features Red Eye Junction, Cave Country, and the Christopher Hawley Rollers. And holy crap, this one’s a bargain! Four bands for $6 presale or $8 at the door? No way! Way! This 7:30 p.m. show is all ages. 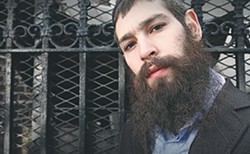 Maybe there’s a whole underground Hasidic Jewish reggae scene I don’t know about, or maybe Matisyahu is one of a kind. All I know for sure is this Grammy-nominated artist hits Pozo Saloon on Sunday, June 21, to promote his upcoming album Light (due Aug. 25).

Lofty ideals, I know, but Matisyahu is no mere luftmensh. This is a fellow with plenty of saykhel!

He announced his presence in 2005 with “King Without a Crown,” which reached No. 28 on the Billboard singles chart and No. 7 on the Modern Rock tally. His 2005 live album hit No.1 on the Heatseeker chart before 2006’s Youth debuted at No. 4 on the Billboard 200. These were some zaftig tracks!

Matisyahu will be backed by Dub Trio, and local act The Kicks will open the 6 p.m. show.

Paso Robles’s own Rhythm Method will rock the City Park on Friday, June 19, from 5:30 to 7:30 p.m. during the city’s free summer concert season. The band plays a wide variety of classic rock’n’roll as well as today’s modern hits.

On Friday, June 19, The Mighty Croon Dogs play the Concerts in the Plaza show in front of the SLO Mission from 5:30 to 7:30 p.m. Expect some good time rock’n’roll and a lot more. 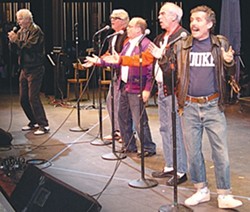 Arroyo Grande Village Summer Concert Series continues at 1 p.m. on Sunday, June 21, at Arroyo Grande’s Rotary Bandstand with vocal favorites The Celebration Chorus and The Bald Spots. The free community concert will feature an afternoon of doo-wop and barbershop music. 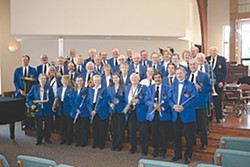 The San Luis Obispo County Band kicks off its new Old Fashioned Sunday Summer Concert Series on Father’s Day, Sunday, June 21, in Mitchell Park in Downtown San Luis Obispo—the first of four free shows on the third Sunday of each month through September. The Washboard Rhythm Kings, performing ’20s and ’30s jazz, will be the featured guest for this opening concert, playing at 1 p.m. The County Band will play spirited marches, selected concert band pieces, and movie and show medleys beginning at 2. 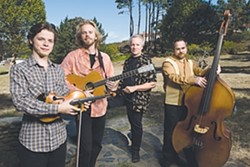 Forget the necktie, the bottle of dime store Old Spice, or the three-pack of golf balls. What your dad really wants is to enjoy a Father’s Day barbecue and concert by The Waybacks on Sunday, June 21, at 2 p.m. at Stacked Stone Cellars. Tickets are $20 a head, but kids, bring your dad and he gets in for free! Wines, ice cold beer, and water will be on sale as well.

Grover Beach hosts the Sizzlin’ Summer Concert Series with The Cinders Blues Band playing on Sunday, June 21, from 3 to 6 p.m. at the Ramona Garden Park during the Farmers Market.

The Reggae City Band plays on Friday, June 19, at the Frog and Peach at 9 p.m. They didn’t really tell me much about themselves, but I’m guessing they play reggae and need a better promoter.

Nashville’s own Kacey Jones is in the midst of a two-week West Coast tour to support her newest album Donald Trump’s Hair (a follow up to Every Man I Love is Either Married, Gay or Dead … LIVE), and will wrap her tour on Sunday, June 21, with a show at The Clubhouse. “I’m [also] performing live on KCBX at 3 p.m. on Saturday, June 20, to help promote the show,” explained the musical humorist. “I’m looking forward to sharing some laughs with some fathers, sons, and daughters at The Clubhouse Sunday night.” It starts at 7 p.m. and costs $10. Call 548-8500
for reservations.

Indie, art-rock band Grand Lake returns to town with a show at the Steynberg Gallery on Monday, June 22. They’ve just released a new cassette single/digital download called “Sanddusky Sunset,” a follow-up to their debut EP Nevermint. “We’re quite pleased with our new single, and very excited about its limited run of 100 cassettes,” said frontman and former SLO Towner Caleb Nichols. “Each cassette comes with a digital download and a button. We’ll only be selling these at shows for $5.”

Devin Wallace wants to invite you to the Gather Wine Bar on Tuesday, June 23, at 8 pm to hear his new lament for our beleaguered governor. Entitled “Mr. Universe,” it goes something like this: “Well look at his picture/ The strain shows in his face/ Not as sure of himself/ As he was in the gubernatorial race// Now he sits alone in a corner/ Up in his house in the hills/ Red stains on his fingers/ As he signs that bloody budget bill.” Wallace will be accompanied by Dan Lichti on trumpet. 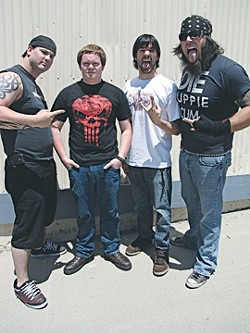 They sound kind of like ’80s rock when I checked their Myspace, but the best thing about Society’s Child is their baditude! “Duuuuuuuude, Society’s Child is playing at the Z Club on Wednesday, June 24, and we wanna invite YOU (yes, you) to come check out the show,” wrote Danny “The MonsterBass” Foster. “Glen, just lemme know if you wanna or can roll out to the show and check us out and I’ll comp you a ticket and put you on the list. Hell, I’ll even point at you from the little stage. Yes, so that all the girls see you and make sure you get laid! Rock’n’fuck’n’roll, bro!” Thanks for the invite, Danny, but it’ll take more than you pointing your finger to get me laid. Rock on!

Rich Medina & Bobbito Present: The Connection Vol. One: Modern Explorations in Afro-Beat and Afro-Latin
Connoisseurs have no time for the mediocre. Enter two respected DJs, beat diggers, and tastemakers: Rich Medina and Bobbito Garcia. Whether hosting their eight-year-old Fela Kuti parties or the bi-coastal Fania Record tributes, these cats have digested warehouses full of vinyl so you don’t have to. Here, at a full disc apiece, Medina’s sizzling Afro-beat selection plays well with the simmering Latin choices of Bobbito. Consider this a one-two punch for your next pool party, barbecue, or any function that can be warmed up nicely with upbeat rhythms and world grooves. Putting much of their focus on underexposed, modern artists, and producers, both men have distilled their collection to these essential 24 cuts, with not a single filler track amongst them. Hands down, a perfectly curated glimpse into the record rooms of highly regarded DJs.

Mos Def—The Ecstatic
This is probably not the Mos Def you were waiting for. But then Dante Smith has always shaken expectation. Returning to his MC roots after a stint in Hollywood and after his forgettable 2006 album True Magic, Mos Def still has a penchant for busy beats. While he doesn’t return to the funk rock Black Jack Johnson outfit you heard on New Danger, the opening track “Supermagic” spills forth a Turkish psych beat chopped up by Stones Throw producer Oh No, then bops over to “Auditorium,” which recycles an Indian-tinged beat mined from Madlib’s Beat Konducta in India series. But while these off-kilter productions may stumble those still looking for a sequel to his classic Black Star debut, give him a moment and Mos Def can still dazzle you with cerebral lyrics that combine his boyish charm with muscle-displaying boasts. And on “History” with the appearance of Talib Kweli, he gives you Black Star aficionados one to chew one.