SLO County isn’t exactly expecting a Sturgis-style motorcycle rally choking its streets next weekend, but don’t be surprised if you see more classic motorcycles on the road … a lot more. That’s because the Central Coast Classic Motorcycle Club (CCCMC) is hosting “The SLO Classic Motorcycle Rally,” a four-day event from Thursday, Oct. 8 through Sunday, Oct. 11 that promises to be the largest event of its kind in the state.

Before you start hiding your children and barricading your homes, CCCMC President John Bernard, a financial consultant, notes, “My club is all classic motorcycles, 25 years or older, and we are not big dirty bikers, but mostly local professionals—people like me, my VP Jason Len of XKs Unlimited, and Glen Starkey.”

Okay, full disclosure: I’m a member of CCCMC, which has about 40 active members, none of whom are big dirty bikers. The entire weekend is going be family friendly and a great opportunity to see some very sweet bikes, including Burt Munro’s modified 1920 Indian Scout that set speed records at the Bonneville Salt Flats in Utah, the bike made even more famous thanks to the Anthony Hopkins film The World’s Fastest Indian. A handful of motorcycle legends will also be attending some of the events, guys like Don Emde, who won the 1972 Daytona 200. Don’s dad, Floyd Emde, won the same race in 1948 on an Indian, and the Emdes are the only father and son to have won the Florida even. Don Emde, a AMA Hall of Famer, is also the author of Daytona 200, the authoritative book on the history of America’s most famous motorcycle race.

You’ll also meet Rob North, legendary builder of BSA and Triumph triples, who’ll be displaying his Dick Mann BSA Triple, the bike that won the 1971 Daytona 200. Craig Vetter, former SLO resident, Hall of Fame winner, and designer of the Triumph Hurricane will also return to his old stomping grounds. And from across the big pond, Mark and Linda Wilsmore of the world famous Ace Café London will be on hand. Ace Café, an old transportation café that opened in 1938, became a popular haunt in the ‘50s and ‘60s for so-called rockers, motorcyclists with a taste for fast café race bikes and rock’n’roll. 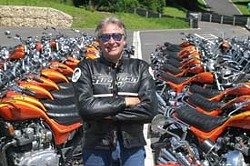 “We’ll have olive oil tasting, and there’ll be wine barrel art at the Saturday show,” added Bernard. “And Rabers [a vintage bikes parts house], Santa Maria Harley-Davidson, and Ace Café will all have vendor booths. We also have some nice items for the charity raffle. Marty Dickerson [who’s set several speed records] is one o the judges for the show.”

“The show on Saturday is a great way to support the Cancer Society,” added club member Wayne Custer, “but the real fun is the nostalgia. I’m always having people come up to me and say, ‘Oh, I had one of those in high school.’ So many people in the ‘50s and ‘60s had an attachment to these bikes.”

Triumph, BSA, Matchless, Royal Enfield, Vincent, BMW, Ducati, Moto Guzzi, Norton—these brands have become legendary, and it seems everyone has a story about their connection to these old brands.

“Even non-motorcycle people will enjoy this event,” noted club member Larry Coolidge. “Some will come just to see the world’s fastest Indian.”

Glen Starkey rides a 1973 Triumph Tiger. Tell him your motorcycle tales at gstarkey@newtimesslo.com.