On July 27, Sarah Sullivan posted a video on the Parents for Joy Facebook page to raise awareness of the Joy Playground's fencing that has now been broken several times in Atascadero.

As Sullivan talks to the camera, she points the video toward the playground fence that has a bar sticking out of place. 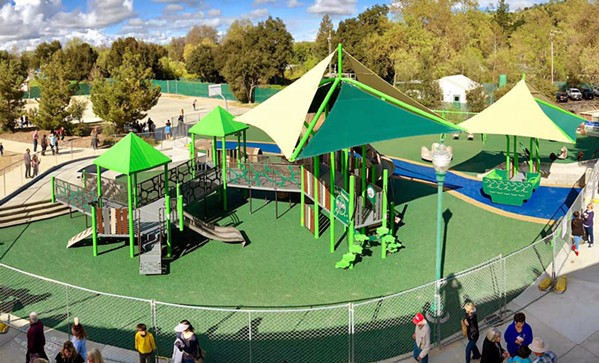 "I'm guessing it's some kids that want to play, and I understand that, I really do. But it's closed and it's closed for a reason. As soon as we're able to open, we'll open it, but breaking the fence is not the way to do it," Sullivan said in the video.

When she made the video, Sullivan told New Times she wasn't exactly sure who she was addressing but she'd had enough. This was the fifth time the fence has been broken and multiple bars were pulled out of place.

Sullivan is a member and advocate of Parents for Joy, a nonprofit organization that has championed and fundraised for the all-inclusive playground that opened to the public in April 2019.

When the park opened for community use, it had a temporary chain-link fence surrounding the playground. Sullivan said the fence was put in place to keep children from running out of the playground and onto the street, Traffic Way. In March of this year, a permanent fence was installed by the Atascadero Rotary Club and the Atascadero Kiwanis Club.

"Especially kids that are on the autism spectrum, they tend to run away, so the fence was a very important part of the playground just for safety purposes. And so that parents could actually sit down and watch their kids play and not worry that they're going to just bolt out into traffic," she said.

Atascadero Deputy City Manager Terrie Banish said the Atascadero Police Department has been monitoring the activity at the Joy Playground.

"When we have had issues with a bar being broken on the fencing, the city's Public Works has fixed the area where this is taking place. The back corner of fencing has had the most activity. This particular location has a small breach allowing people to access the area to retrieve stray balls that land into the playground," Banish said.

The city urged the public to contact the Atascadero Police Department at (805) 461-5051 if they see anything suspicious.

All city-owned playgrounds, including Joy Playground, are currently closed in compliance with the governor's COVID-19 order. City parks are open to small family groups of up to 10 people.

On Sullivan's downtime, she walks over to the park to check on it. It's her time to relax and unwind, but she said finding the vandalized fence wasn't relaxing at all. She said she wants the vandalism to stop and for people to have patience to enjoy the park once again. Δ