Currently open from 4 to 8 p.m. from Wednesday to Friday and noon to 6 p.m. on weekends, you can pick up canned beer from Colony Mash and food from Colony Culture at 3164 El Camino Real in Atascadero. Find them on Instagram @colonymashbrewing.

When Colony Mash Brewing Co. first opened in August, it was for to-go beers only: 16 ounce cans of fresh new brews.

Then they started serving outdoors, then indoors at 25 percent capacity, then back to outdoors, and now, Colony Mash is already back to where it started: selling to-go.

"We kind of made the full circle," owner/brewer Erik Knapp said with a laugh. "The fastest circle ever."

Due to his work with a mobile cannery, Mercenary Canning Solutions, Knapp said Colony Mash was able to have seven different beer styles in cans on the day they opened. It gave them a little bit of a boost amid the uncertainty of the COVID-19 pandemic.

Of course, due to the limited shutdowns and stay-at-home orders, Colony Mash isn't doing as well as they'd initially hoped. But Knapp said that's the case for everybody, and the brewery's built on a solid foundation.

"At this point, we've planned for so long to have this come into fruition, and we've done our due diligence to get proper financing, so we're not scrambling," Knapp said. "We're going to keep chugging until it's over and take our lumps, but we're not worried."

Colony Mash has been in the works since 2014, when Knapp was still working in the wine industry after graduating with his enology degree from Cal Poly. He worked around the Edna Valley, dabbling in home brewing on the side before moving backed to Pennsylvania to see if he wanted to take over the family winemaking business. 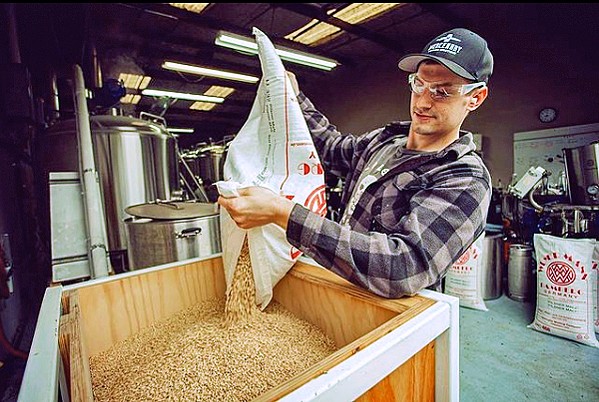 Knapp's father is a first generation winemaker who planted wine grapes in 1990 in Pennsylvania. After spending some relatively weather-free years in California, Knapp's return to snow country made him realize that he didn't actually want to deal with snow for the rest of his life. So he headed back to the temperate Central Coast in 2016, where he got serious about beer making.

"After spending a lot of time in the wine industry, the moments that I really liked the best was essentially the end of the day, and you all kicked ass that day, and you're relaxing with a beer," Knapp said. "I felt a little bit disjointed because I was thinking if we all like beer that much, why aren't we making beer?"

He continued working full time in the wine industry as a cellar tech, operating pumps and hoses every day from 7 a.m. to 3:30 p.m. before heading over to his friend and future business partner Ethan Kraut's house to brew in the evenings.

Using a half-barrel brewing system (15 gallons) they built in his business partner's basement, he tested out recipes, leaning on his knowledge of chemistry and the wine industry to help tweak and perfect his beers. Knapp said he pursued beer making in a similar way to the way he pursued his winemaking degree, with diligence and copious notes.

Kraut and Knapp first met at Tolosa Winery, where Kraut worked on the facility to ensure that everything was running properly so that the wine could be made in the best way possible. Kraut's background, Knapp said, is in framing and electrical, so Kraut takes care of the brewing equipment and facility maintenance, while Knapp handles the brewing side of the things.

The brews Colony Mash is putting out span the gamut, from IPAs to imperial stouts. Favoring lower alcohol, cleaner, lighter beers, Knapp said he loves traditional German pilsners and Belgian saisons. But, being a winemaker, Knapp said fruit fermentation is really fun for him.

"It's pretty much like adult fruit punch," Knapp said.

Traditionally, a sour beer is inoculated with wild yeast—which can wreak havoc on commercial strains of yeast used to ferment non-sour beers. Instead of risking cross-contamination, he lets the beer mash sour in the kettle for 24 hours before completing the brewing process and feeding it into the tanks, where he adds the fruit.

That way, the beer retains a certain tartness and a lot of aroma from the fruit itself. And the rest of his beers are safe.

Colony Mash also dabbles in hard seltzers, currently selling a cucumber and lime seltzer as well as a plum and ginger. He does an initial fermentation using dextrose, which is a corn sugar, and then re-ferments the seltzer on fruits and spices. Colony Mash doesn't back-sweeten the seltzers before they're canned, either.

The seltzers are bone dry with no residual sweetness to them, and a fruity kick at the back end, making them clean, refreshing, and a wee bit dangerous at 6 percent alcohol. 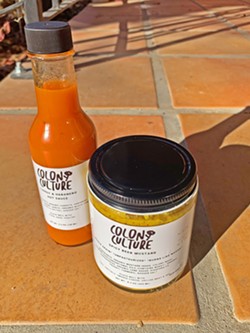 Obviously, a love for fermentation runs in the Knapp family, and his sister Monika is no different. She recently moved out to Atascadero to cook up grub for Colony Mash. And although, she hasn't been able to dish out a full menu due to the pandemic, her business, Colony Culture, is serving up plenty of fermented goods: hot sauce with carrots and habañeros, spicy beer mustard, sourdough, and more.

Knapp said Monika has started offering some different to-go specials on Thursdays, which people can pick up with their to-go beer orders. She serves up different toasts with fermented goodies on top such as black garlic, pickles, cultured butter, and fermented fruit jams.

Although the brewery and tasting room is small, 1,300 square feet, it's effective and efficient, full of the smells of fermentation and a family that's making things work. Δ

Editor Camillia Lanham is having another plum and ginger seltzer. Don't judge her, but send food news to clanham@newtimesslo.com.