You know how tiny and miniscule you feel when you’re lying on your back, looking up into a clear, starry night? That’s how Festival Mozaic Music Director Scott Yoo feels when he listens to Johann Sebastian Bach’s Mass in B Minor. And he totally loves it. 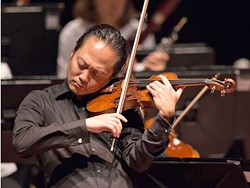 “In a great way, I feel like an ant when I study this music,” Yoo said. “When it comes to Bach’s music, I just cannot comprehend that someone wrote this. My brain can’t get around this fact. It’s just too good for someone to have written it down.”

Think Yoo’s being a little overly dramatic? Just consider your own favorite album, book, or movie—the classics that have been around since well before you were born. Doesn’t it just feel like that piece of art has—I don’t know—always been there? Like Brontë’s Jane Eyre or the black and white masterpiece Casablanca: It didn’t simply spring from the ether. Someone had to create it.

Festival Mozaic will present Bach’s Mass in B Minor, birthed one year prior to the composer’s death in 1750, at two upcoming shows: Friday, July 24, at Mission San Miguel and Saturday, July 25, at Mission San Luis Obispo. The Festival Orchestra has been studying for months to prepare for the music, which features intricate overlays of choral performances. According to Yoo, some of the best choral singers in San Diego will join the group of exceptional Central Coast musicians. 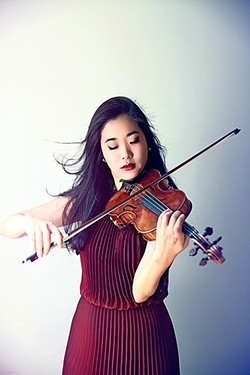 “This is a piece of music you don’t get to work with every day. The craftsmanship is so high,” Yoo said. “Bach was so effortlessly able to layer three or five voices on top of each other, each one interesting and unique, yet they sit together so seamlessly. When you get a chance to do this music with such talented musicians, you take it extremely seriously. It was my religion for the last four or five months.”

It’s true. Yoo spent 12-hour days dedicating his focus to the music. And as it goes with any great piece of art, Yoo continued to go deeper.

“It’s amazing. You look at a piece of music for that many hours and there’s always so much more to discover,” Yoo said. “A piece like Bach’s Mass in B Minor is a piece you study for the rest of your life. It’s the equivalent of an actor playing a role like Hamlet.”

The composition encompasses 26 distinct sections of music, all of which tug hard at the heartstrings.

“It is not a marble statue you look at and say, ‘I guess this is great.’ It is so infused with emotion—absolute ecstasy, the most tender emotion, the darkest emotion, and most sorrowful,” Yoo said. “Bach manages to do this with a very ancient musical language, and in the process, touches on emotions that each of us feel every day.”

Not versed on classical music? Don’t worry about the whole “mass” thing. Plus, the music wraps up in less than an hour and 45 minutes.

“This is not a religious ceremony, although the music was written for a Catholic mass. It doesn’t mean that it is stuffy or forbidding or intimidating whatsoever,” Yoo said.

After all, Bach—as prolific a composer as he was—was also just a guy. He was once jailed for being “too stubbornly.” It’s crazy to think that his peers deemed him a “has been” at the time that his lush masterpiece Mass in B Minor was finished, but he was.

That’s why Yoo likes to think about the forensic librarians who actually pore through withered pages of classical music greats like Mozart and Bach, analyzing the ink, noting typos, and keeping an eye out for what kind of quill might have been used.

This study reminds us that we all are mortal, that we all have the potential to create incredible works of art that will outlast our flesh and bones.

According to Yoo, that is exactly why it’s important to honor and present this specific piece of music—to keep it alive and beating and to revel in its universal humanity.

“You don’t play it ’cause it was great 300 years ago,” Yoo said. “You play it because the music speaks to the human condition right now.”