Plans for a six-story development with 50 housing units in downtown San Luis Obispo are making their way through the city's approval process.

On Sept. 17, the SLO City Council gave preliminary feedback on the plans, approving the use of a special overlay zone that would allow for more density on the site at 1144 Chorro St.

If ultimately OK'd by the council, the project would end a years' long vacancy at the Marsh and Chorro street intersection—and would also become one of the tallest buildings in town at 75 feet. The property owner, Jamestown, scrapped prior plans for a bowling alley and entertainment center after a falling out with its previous partner, Discovery SLO. 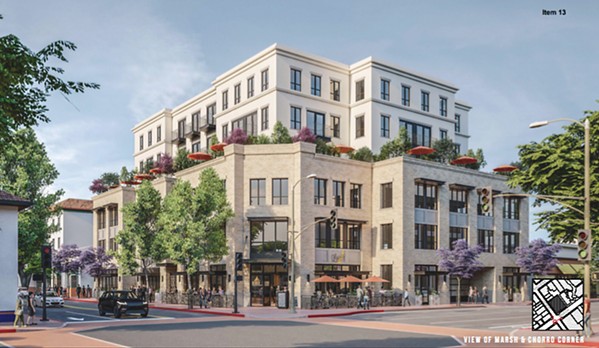 Proponents say it meets the city's goal of building housing near job centers and public transit.

"This is a project that really checks all the boxes," said Jim Duffy of the architectural firm Ten Over Studio.

To earn the city's approval for a building taller than 50 feet, the developer is making 25 percent of the units affordable for moderate-income renters and will preserve in perpetuity the public plaza next to the Downtown Centre theater.

Moderate income renters earn between $73,000 and $84,000 per year, and the maximum rent that could be charged on those units is $1,300, according to city officials.

Public opinion on the project was split at the meeting. Some argued for bringing more housing to the downtown area.

Krista Jefferies of Grover Beach said the moderately priced studios will help families like hers afford to live in SLO.

"The SLO life is available to fewer and fewer," she said.

But other longtime residents were opposed to the building's proposed height and density.

"I look at this and I think, this doesn't look like San Luis Obispo at all," said 40-year resident Betsy Schwartz. "Six stories is outrageous in this town."

While citing some concerns about parking, ADA access, and public amenities, City Council members mostly stressed SLO's dearth of affordable housing and their preference to build downtown as opposed to where it infringes on open spaces.

"Housing is the No. 1 concern of the vast majority of this community," Mayor Heidi Harmon said. "When appropriate, we're going to need to consider building up."

Next, the project will proceed through the city's review process, including stops at the Cultural Heritage Committee, Architectural Review Committee, and Planning Commission. Δ