Fig Cafe at Courtney's House is a nonprofit, full-service cafe and workplace for adults with developmental and intellectual disabilities. Book an event at figgoodfood.org, or go in for brunch Monday through Friday from 11 a.m. to 3 p.m. or Saturday and Sunday 9 a.m. to 2 p.m. Fig is located at 311 6th St. in Templeton.

Out on the shady wrap-around-porch of the grand Victorian house across from Templeton Park, an aunt and her niece catch up over brunch, coffee, and mimosas. Inside, guests eat in funky little nooks with mismatched shabby-chic chairs. Meanwhile, both the front and back of the house prepare for the day shift in a way that you could never imagine.

There's no place exactly like Fig Cafe at Courtney's House.

Christina Dillow founded the popular brunch destination with Carrie Sanders, a mother whose nonprofit Courtney's House was providing vocational, social, and life skills support for her autistic daughter, Courtney, and many other young adults with special needs. Fig Cafe at Courtney's House was the result of Sanders' trying to manifest a restaurant to provide work for her clients and Dillow's readiness to add deeper meaning to her restaurant ventures.

Dillow has a long history in restaurants, from owning the Harmony Pasta factory with her husband in the '80s and '90s, to managing Big Sky Café in SLO. But when Sanders approached her with the idea of teaming up, she didn't hesitate.

"I felt strongly about finding the different perspective of running restaurants," Dillow said. "Instead of having just one of the three restaurants that I've owned—as I get into my 50s—I said, 'Something new needs to come from all of this.'"

Dillow said she receives a phone call every now and then from people looking to mimic her unique restaurant model, but there are only two others in the nation that she knows of with anything similar: one in Palo Alto and another in Ohio. Ultimately, Fig is leading the way to be a place where adults with special needs can work, build self-confidence, and feel purpose in society.

Taryn Bauer, Fig Cafe's spunky, tattooed chef who opened Marston's 101, has her cooks prepping for the day. Chopping, slicing, and dicing, you would imagine, right? There's much more to it than that. Bauer is making sure that Maggie, age 24 and one of Bauer's most accomplished interns, remembers to reference a book that was created just for her. In the book, Bauer put detailed photos of the food Maggie must prep and stock in a station that has been tailored to her needs for her three-hour-shift. A separate sheet of paper details Maggie's daily goals.

The book of tasks is a tool that educators use as an effective way to keep those with special needs on task. But just as important as the task list, Bauer said, is providing constant positive feedback and encouragement.

"It's way more gratifying here than anywhere else," Bauer said of the job she began in February of this year. "Here, it's humbling. You are using patience. I'm still trying to be firm because you're not going to learn anything if you're not firm."

Bauer's goal is to get Maggie cooking, and most of her strategy includes setting goals, accountability, and building a good work ethic. Even if some of the interns may not be as far along as Maggie, work wise, at least they have a place to go "instead of watching TV or playing video games," Bauer said.

Erin Lawrence, Fig's program manager, calls the intern's lists of things to do "task analysis." She started at Fig as a volunteer, but when the founders saw how passionate she was about the interns, Lawrence was hired immediately. She says she picked up some tricks working as a paraeducator in Templeton schools.

If an intern walks in the door using a loud voice, Lawrence will gently let them know that they need to go back and try that again with a quieter voice. Lawrence's team lets me know she is the mother hen of the roost, known as the training guru and a behavioral challenge master.

Fig works as a 501(c)3 nonprofit. With about 11 to 19 interns depending on the season, Fig also has experienced staff members without disabilities.

Internships begin as voluntary, unpaid positions as part of the learning process, but Fig partners with the Tri-County Regional Center, which expedites state funding for its participants after an initial training period. Dillow said the job demand for adults with disabilities ebbs and flows, but right now, Fig does have a waiting list. Interns work three-hour shifts and are supported by a job coach or multiple staff members throughout their shift. 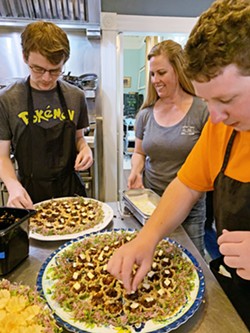 The most popular item on the menu is, hands down, the harissa hash and eggs: two over medium-cooked eggs served over smoky dried chile- and garlic-glazed potatoes and local linguica sausage with a side of garlic toast.

"I don't cut corners," Bauer said. "To get the general public in here you have to have good food, and we have great food."

The menu also features omelettes, farmer's frittatas, and applewood smoked bacon and eggs. Or, if for those who are feeling fancy, Fig Cafe offers a lemon poppyseed waffle, curried tofu scramble, or the Frenchie sandwich made with sweet and savory homemade fig chutney, fig balsamic, melted brie, greens, and roasted garlic on house-made focaccia.

Fig's food is sourced from farmers' markets and area farms and natural stores—organic and local as much as possible, Bauer said. Specifically, they source produce from Nature's Touch in Templeton and grass-fed beef from Templeton Valley Farms.

The feeling inside Fig is very much artsy, hometown, and boutiquey. In and out of every room is an intern or two working at whatever task fits their individual strengths. No one does just one job. You might just see Dillow cooking your meal if Bauer isn't there. Dillow said at Fig they measure their interns' successes hourly. Baby steps. Everyone has their own processing time.

"When their skills grow, we back off with the job coaching," Dillow said. "We've seen tremendous changes in some of the interns. Especially with behavioral skills."

One of the interns used to cry in the car before coming in due to built-up anxiety. So Fig started her with enrichment. She progressed into the set-up and break-down of the restaurant, then graduated to running drinks.

"Now she comes in the door beaming and ready to work," Dillow said. Δ

Flavor Writer Beth Giuffre is inspired by multitasking, ultra-motivated Fig employee Leslie, a 35-year-old with epilepsy who has worked at Fig for three years. Beth hopes one day her 11-year-old son with epilepsy can work in the Fig kitchen with Bauer. Send your food inspiration to bgiuffre@newtimesslo.com.