As the embattled CalCoastNews seeks to appeal the $1.1 million libel verdict handed down by a jury in March, the local businessman defamed by one of its articles now owns the company's LLC. 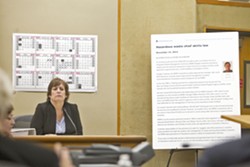 Documents show that Charles Tenborg, the Arroyo Grande waste-management business owner who successfully sued CalCoastNews over a 2012 article about him, registered a limited liability company (LLC) called "CalCoastNews/UncoveredSLO.com" with the California Secretary of State's office in June. The name appears to be an exact match to the LLC previously registered under the name of CalCoastNews owner and reporter Karen Velie, who was named as a party in Tenborg's lawsuit along with co-founder and reporter Daniel Blackburn.

Speaking to New Times, Tenborg said he registered the company name after the Secretary of State's office suspended CalCoastNews' original LLC, freeing it up for someone else to claim.

"One of the rules is that someone else can come in and grab the corporate name," Tenborg said. "I reserved the name."

Tenborg acknowledged that he currently has no control of the CalCoastNews website, personnel, or content. In a July 18 post, CalCoastNews addressed rumors that the site itself had been "taken over" by Tenborg.

"Rest assured that CalCoastNews remains an independent news source," read the post, which did not include a byline.

While Tenborg has control of the LLC, he and his attorneys continue to fight in court over control of the CalCoastNews website domain. According to court filings, Velie transferred ownership of the calcoastnews.com website domain to a Cayucos resident named Dennis Pfister in early April, shortly after a jury issued its $1.1 million judgment against the website, Velie, and Blackburn. According to Tenborg and his lawyers, the domain name is property that could be used to satisfy some of the $1.1 million judgment against CalCoastNews. In court filings, Tenborg's attorneys claimed that the transfer to Pfister was fraudulent and voidable.

That battle will occur in SLO County Superior Court, where both parties are participating in debtor examination hearings to determine just how the damages will be paid to Tenborg. As part of that process, Tenborg's lawyers are attempting to serve Pfister with an order to appear in court but have thus far been unsuccessful, according to court records. Collection proceedings against Blackburn were suspended after he filed for Chapter 13 Bankruptcy shortly after the verdict. While the judgment proceedings play out in SLO County court, CalCoastNews has already filed an appeal of the case with California's 2nd District Court of Appeal. Hearings in that case have yet to be scheduled.

In the meantime, the future of the website, and Velie's role as its owner and reporter, remain uncertain.

"This ain't over 'til it's over," Blackburn wrote an email response to questions from New Times. "Without Karen Velie, CalCoastNews is just alphabet soup." ∆