Fight for your right to Mardi!

It’s Friday, Jan. 6, also known as Twelfth Night, and I’ve got so many strands of beads around my neck I feel like a plow horse in a harness. It’s 6 p.m., and my paramour Anna Robertshaw and I have just arrived at Bon Temps Creole Café, which is having a special Mardi Gras dinner with music by Val Johnson & Her Voodoo Doodads. 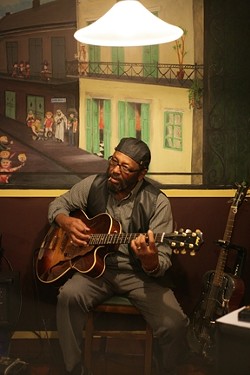 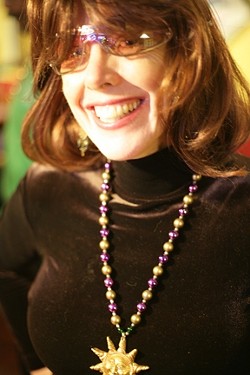 It’s the official kick off to the Mardi Gras season, and if you’ve been around SLO Town for a few years, you’re probably thinking, “I thought the city killed Mardi Gras.” Well, guess what, people? You can’t kill Mardi Gras, you can only drive it underground. There’s still a cadre of die-hard revelers and even a couple of still functioning krewes—Beleza Sol and the Sybarites—who are in attendance to the tune of about 50 people strong. Woo hoo! 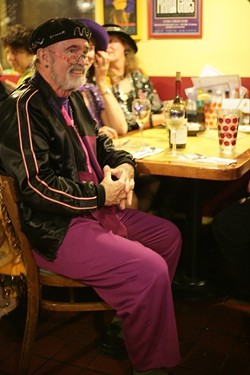 When the waiter returns, Anna says, “We’ll have one of everything.” And that’s why I’m marrying her!

Meanwhile, I spot Liz Rhoads Cordoba positively glowing from across the room. After George Griffin gave up asking her to marry him after trying a dozen times, she recently popped the question to him. Love conquers all!

And speaking of love, Jeff and Cathy Bague take to the dance floor and are tearing it up in their matching tri-cornered hats (think gaudy pirates, not Tea Partiers, people!). Then Dead King Jay Mueller hits the dance floor with his new gal Deborah Maggipinto. It’s heating up in this joint!

Archie McLaren makes a grand entrance in his purple slacks. Here’s a man who's never been afraid of color, whose Avila Beach house makes the Partridge Family’s van look sedate, and who let an artist take a paintbrush to his Jaguar. Lucky those pants are baggy, because you know this guy’s got a couple boulders between his legs.

Then Anna and I see our pal Mano Gil, the awesome Brazilian expatriate and DJ, who joins us at our table. He’s nibbling at his food.

When he finally finishes a while later, he smiles and says, “Slow and steady wins the race.”

Meanwhile Valerie Johnson & Her Voodoo Doodads (Al B Blue on guitar, Dr. Bob Brenman on saxes, and Kevin McCracken on harmonica) are just tearing down the house!