Fighting students: Righetti has a bad day that sends echoes into the future

What happened at Ernest Righetti High School on Nov. 19 sucked. It wasn’t a good day for the district; the high school; its students, parents, or teachers; law enforcement agents; or the community. It was a mess, plain and simple.

Shadows of the chaos that overwhelmed the tail end of the school’s Nov. 19 lunch period continued to fall over the campus on Nov. 20 and Nov. 21 via social media, regular media, and student rumors that parents and school and district administrators were forced to deal with. Students were let out early on Nov. 21—before the Thanksgiving break—due to unsubstantiated rumors of a potential shooting. 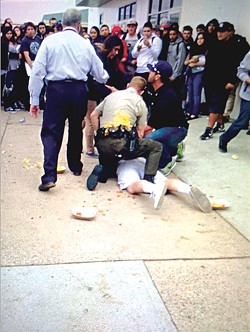 Law enforcement and school officials checked student backpacks for weapons and didn’t find any, but the incident was such a distraction that the district decided to send students home.

Parents started picking up their kids around 11 a.m. even though students weren’t officially released until 12:25 p.m.

Who can blame them? It could happen. It’s a scary situation to hear about whether it’s actually true or just another high school rumor.

After all, what happened on Nov. 19 was a shock, a sort of once-in-a-school-lifetime fluke of events that converged into one hell of a day for Righetti High School and law enforcement agents.

During first period that day, someone tripped the fire alarm. Yes, kids are kids. Then, at lunchtime, two female students in the quad got into a fight over a boy. That also happens.

It’s what happened next that was pretty atypical. School security officers broke up the fight and called the school resource deputy, but as that deputy was interviewing the girls, trying to figure out what happened, another fight erupted in another area of the quad. The resource deputy responded as security officers were escorting the initial female fighters to the administrative office. The second fight turned physical. The deputy intervened, a student resisted and struggled with him, and the pair fell to the ground.

A press release from the Santa Barbara County Sheriff’s Office—the department has a contract with the district to provide the security on campus—said: “A large crowd gathered and began yelling obscenities at the deputy and threw food, food containers, and bottles at him. The deputy was struck several times by items thrown at him by the crowd. School security officers and administrators attempted to hold the crowd back as they tried to converge on and kick the deputy.”

At that point, the officers on campus called for back up.

A cell phone video of what happened in the moments that follow shows a small crowd of female students surrounding a sheriff’s deputy; one of the students rushes toward him, and he reaches out and shoves her to the ground. This seconds-long video clip hasn’t exactly gone viral, but it has made the rounds in this local corner of the Internet.

“A deputy contacted one of the female suspects and attempted to detain her. She resisted arrest by pulling her arm away and attempting to escape. Her friends surrounded the deputy and pushed and hit him. In the process of defending himself, he shoved the females away and one of the suspects was knocked to the ground,” the press release explains.

The Sun attempted to contact the Sheriff’s Office public information officer, Kelly Hoover, to get additional comment on the incidents, but she didn’t respond to multiple inquiries.

Dozens of law enforcement vehicles lined the school side of Foster Road, and CHP officers directed traffic. Cameras from the local TV stations and news reporters met students as they exited campus. Some students hopped on the buses lined up in the parking lot, others had parents pick them up, and some walked home. Everyone was talking about what had just happened.

“When I heard the helicopters, I was like ‘oh God!’” said sophomore Ivory Jones, who witnessed the altercation between the deputy and the group of girls. “It was literally unbelievable.”

“The kids were all going crazy. … The second guy got taken into the security office, and that’s when the four girls got really upset,” she continued, talking fast. “They were really pissed at the cops, like in their face.”

Another student said his friend had been Tasered, but Davis said no Tasers were used during the incident that he was aware of. He also said that students were coming forward with cell phone videos, showing more angles of all the incidents and that the Sheriff’s Office was looking through the school’s surveillance footage.

He said the deputy shown in the viral video was defending himself against his attackers. Davis added that what happened at Righetti that day was out of place.

“It was a highly unusual circumstance where so many students were combative with law enforcement,” he said. “There was one group of students who [sic] was combative.”

Righetti was placed on lockdown once earlier this year, on Oct. 24, for something similar to the initial incident that started the chaos on Nov. 19: a fight that became a sort of food fight. Davis said district and high school officials and the Sheriff’s Office were discussing what organizational tools they could use to prevent it from happening again.

Because of the Oct. 24 incident, the district had already ordered more surveillance cameras. Davis said the school was going to “pepper” the campus—“especially the quad area”—with them. Righetti has 2,000 students who go to lunch at the same time, and there’s been some talk of breaking that up into two separate lunches, so only half the students take lunch at the same time.

“These things tend to happen at the end of the lunch period. Maybe the lunch period is too long,” he said. “The other thing is, we plan to come down really hard on the people who participated in this. This kind of behavior is not going to be tolerated on any of our campuses.”

As of Nov. 21, nine students had been arrested in association with the incidents of Nov. 19, and Davis said the investigation is still ongoing.

“There’s a big difference between kids being kids … you know, being mischievous,” he said. “And kids being threatening to law enforcement and staff.”

Camillia Lanham is managing editor of the Sun, New Times’ sister paper. Contact her at clanham@santamariasun.com.