'Fighting with My Family' is a terrific family dramedy

FIGHTING WITH MY FAMILY

Writer-director Stephen Merchant helms this biopic dramedy about pro wrestler Saraya "Paige" Bevis (Florence Pugh), who grew up in a wrestling family that made its living from wrestling in small venues across Britain, with father Patrick "Rowdy Ricky Knight" Bevis (Nick Frost) and mother Julia "Sweet Saraya" Bevis (Lena Headey). Paige and her brother, Zak "Zodiac" Bevis (Jack Lowden), dream of joining WWE, but when she earns a spot and he doesn't, it strains family ties. The film also stars Dwayne Johnson and Vince Vaughn. (108 min.) 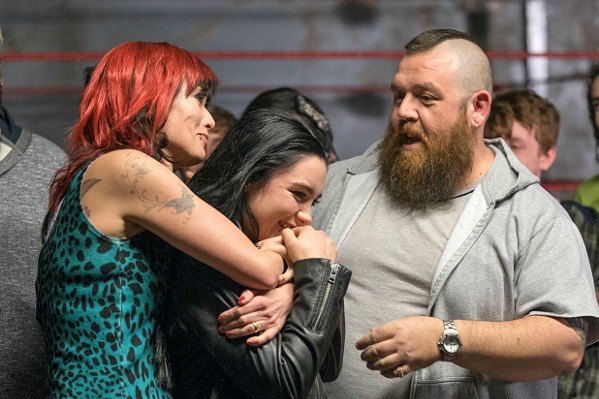 Glen I didn't know what to expect of this film. I'm not a pro wrestling fan, though I certainly knew of a few '80s wrestling stars like Hulk Hogan and "Rowdy" Roddy Piper, mainly because they were on 7-Eleven Big Gulp cups or in a few movies I've seen. I did love the 2008 Mickey Rourke film, The Wrestler, which helped me understand the whole wrestling phenomenon better, but I don't watch pro wrestling and don't really care about it. Despite my disinterest, this film was amazing! Like The Wrestler, this is a film about family and relationships. It's surprisingly potent emotionally, the characters are all really engaging, and there are plenty of laughs. The film opens with 13-year-old Saraya (Tori Ellen Ross), who's reluctantly talked into wrestling in one of her family's exhibition matches. When she hears the roar of the crowd, she's hooked. Fast-forward five years, and her family gets the call they've been dreaming of. The WWE reviewed the wrestling tape the family sent, and Saraya (now played by Pugh) and her brother, Zak, are offered a tryout. When it's all said and done, Coach Morgan only takes Saraya, and what follows is her trip to LA where she's groomed to become one of the wrestling divas of the WWE. She discovers that the other girls she's competing with—taller, better looking, and, in Saraya's mind, unworthy—are former models and cheerleaders, not actual wrestlers. Another source of drama is her relationship with her hard-nosed coach (Vaughn at his snarky best), who, like a drill sergeant, is trying to weed out the weak. While Saraya starts to doubt herself and her ability to make it into the WWE, Zak is stuck back in England with his girlfriend and a new baby. Meanwhile, her parents are beaming with pride and don't realize she's on the verge of quitting. It's a classic sports underdog story. I loved it!

Anna That this story is based on a real family is such a selling point—they're so endearing in an off-the-wall, break-the-mold way, and the audience can't help but fall for the whole group. While the big dream has always been WWE, Saraya and Zak are mostly content with their under-the-radar lives, sharing their talents with local kids and teaching what's truly in their blood: good old-fashioned wrestling moves. But when the call comes in that they've been asked to audition, the possibilities of a world outside their small lives leaves both dreaming of a whole new life. When I think of the WWE, I think of its golden age—the '80s and early '90s with the crazy, over-the-top characters parading around and putting on a show. While I can't speak to what kind of character the real Saraya may be, the movie version is an "other," a black haired, heavily eye-lined, self-acclaimed "weirdo from Norwich," who's fiercely proud and protective of her family, strong but also young and scared, and a total underdog when it comes to the WWE world. She may be the only chick who actually knows how to wrestle, but in a world built to highlight glitz and glamour alongside tits and ass, her competition is presentation-ready from the get-go, and she's left in their whirlwind. Saraya also struggles with finding her voice, and while she may appear to be a hard-ass, she's still an 18-year-old girl half a world away from her family and friends, and is palpably scared of failure. I didn't know much about this film going into it, and I've got to say I fell pretty head-over-heels for this family and Saraya's story. They're brash but incredibly tightly knit, and are each other's cheerleaders in every way. This is one that had me laughing and crying from one minute to the next; it's a winner.

Glen These kind of feel-good stories can easily slide into corniness and predictability, but Merchant—who, in addition to co-writing and directing, plays Zak's girlfriend's uptight father, Hugh—keeps the tale fresh. It's pretty amazing this is based on a real family, and in the closing credits we get to see footage of the actual Bevin family as well as Paige wrestling in the WWE. The casting is certainly spot-on. Frost, who's been in some great comedies such as Shaun of the Dead, Hot Fuzz, and The World's End, is terrific as the Bevin patriarch, an ex-con and bear of a man who fiercely loves his family and credits wrestling with saving his life. Headey as the punk rock matriarch turns on her comedy chops in a characterization that couldn't be more different from Queen Gorgo from 300 or Cersei Lannister from Game of Thrones. The real star, of course, is Pugh, who plays Saraya as a balance between tough and vulnerable. Dwayne "The Rock" Johnson has a lot of fun playing himself and pays homage to the stage that first brought him fame, the WWE. At one point, Zak is asking him for advice on how to win over a crowd, and Johnson launches into a brilliant soliloquy. There's a reason why he's currently the second highest paid actor in Hollywood. He's incredibly likeable. I also can't say enough good things about Vaughn, who strikes a perfect balance between hard-nosed coach, supportive cheerleader, and gifted molder of superstars. His Hutch Morgan seems to say the right thing to motivate his wrestlers just when they need it most, and in between he's delivering lightning fast insults that had me laughing aloud. No doubt about it, this film surprised the heck out of me.

Anna It strikes a great balance between feel-good and funny, and doesn't sugarcoat the grueling work that it takes to become a superstar, no matter the arena. There are no excuses, no exceptions made for anything less than the athlete's best, and that doesn't guarantee that their best is even close to good enough. Coach Morgan is the hard-ass hiding a soft spot, and when Saraya continues to fight for her brother to gain a spot in tryouts, his reasons behind not taking on the young, new father become clear. Paige could be a star, but Zak would be relegated to the role of journeyman, a fall guy that the stars step on as they rise to fame. Lowden plays Zak with great nuance. His life isn't turning out like he had hoped and planned, and he's stuck on the sidelines watching his younger sister, whom he trained, take the glory. In the end, family wins in this one, and the journey to the spotlight is even more epic than Saraya could have ever imagined. I loved this film and will watch it again when I have the chance. Δ