Figueroa Mountain Brewing Company is in the spotlight once again. This time, the brewery made Inc. magazine’s annual list of the 5,000 fastest growing, privately held companies in the United States.

The list may only seem like someone’s trivial opinion, except that the New York City magazine has been putting out similar lists since 1982. Also, consider the sheer number of companies in the U.S. 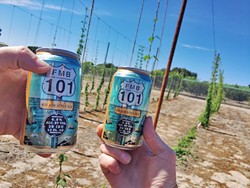 Fig Mountain was founded in 2010, but grew by 893 percent in the last three years alone. The Buellton-based company added 56 jobs and earned $6.2 million in revenue.

“We’re just sad we didn’t break 500,” Fig Mountain owner Jaime Dietenhofer said jokingly. “Being on the list is great. It’s an honor to be with some of the other companies.”

The other companies that shared similar accolades include PhishMe, a computer security company out of Leesburg, Va., which came in a number 520. Altitude Digital, an advertising and marketing company out of Denver, ranked 518.

Here at home, it’s not hard to see why they made the list. Dietenhofer is adding two more locations to the Fig Mountain territory. The brewery already has several other taprooms in addition to the founding Buellton location, including ones in Santa Maria, Santa Barbara, and Los Olivos. The new Arroyo Grande location on Grand Avenue opened in July and is ready to pour. Construction for another location in Westlake Village is currently underway, although Dietenhofer couldn’t give a timeline for when that one will be open.

Dietenhofer said he’s modeling the locations on the Buellton taproom. The beer will still be brewed on site, basically increasing production capacity. Whereas some breweries ship product out to meet demand, Dietenhofer is building an extra brewery at the source.

“That’s one problem: When you grow, you have the potential to run into supply issues,” Dietenhofer said, adding that he wanted to be able to make more nuanced beers, as well as continue to make their line of flagship brews.

This month, those beers will be on show for the rest of the U.S. as Fig Mountain heads to the Great American Beer Festival from Sept. 24 to 26. It’s not their first time going, but this year it’ll be the biggest GABF ever with more than 900 breweries pouring. For Dietenhofer, and many brewers alike, having that many breweries in one spot is always a great thing to see.

At home, Dietenhofer chalks up the brewery’s success to having great beer and a great team.

“It’s all about focusing on quality,” Dietenhofer said. “You can’t get there by putting out a product that people don’t repeat purchase.”

Figueroa Mountain is located in many spots across the Central Coast. For more information, visit figmtnbrew.com or call 694-2252.

Staff Writer David Minsky from New Times’ sister paper to the south wrote this week’s Strokes & Plugs. Information should be sent to strokes@newtimesslo.com.