Take another look at the events surrounding 9/11

There's no shortage of films questioning the government's version of 9/11, but first-time filmmaker Ray Nowosielski felt compelled to add 9/11: Press For Truth to the mix after stumbling upon the "Complete 9/11 Timeline" an Internet source that chronicles more than 7,000 news stories related to the attacks. 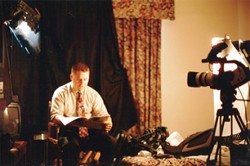 # Nowosielski said that unlike other 9/11 movies, which tend to be either "conspiracy-related and kooky" or "mind-numbing" replays of events, Press For Truth takes a facts-based approach.

"There's not a left or right slant," he said. "[It's] a down-the-middle, let's-look-at-what-happened approach."

Drawing upon Paul Thompson's Internet timeline and subsequent book, The Terror Timeline, much of the film highlights newspaper articles and televised news stories that, when put in context, paint a much different picture than the one presented by White House officials.

Particularly striking is the footage of President George W. Bush, Vice President Dick Cheney, and National Security Advisor Condoleeza Rice staunchly insisting that there were no warning signs or specific threats prior to 9/11. Thompson's timeline has articles showing that at least 14 countries warned the United States of an impending attack, with some of those warnings pointing out the attacks would involve hijacked airplanes being flown into the World Trade Center and Pentagon.

Despite all the well-documented warnings, the "9/11 Commission Report" concluded, "9/11 was merely a failure of imagination."

The Commission's conclusion did little to mollify family members of the 9/11 victims who were seeking answers. This film features five members of the Family Steering Committee a group of family members who were instrumental in getting the government to form the 9/11 Commission. Three of the five featured are the famous Jersey Girls the widowed wives ruthlessly denounced by Ann Coulter as "harpies" bent on milking their husbands' deaths.

The family members discuss the opposition they faced in getting the government to form the 9/11 Commission.

This is followed by footage of Cheney vehemently denying Sen. Tom Daschle's claims that Cheney called him several times urging him not to investigate the events of 9/11.

Another committee member points out that the Republicans spent $100 million investigating President Bill Clinton's sexual exploits, but initially only allocated $3 million to the 9/11 Commission investigation. Eventually, the figure was raised to $14 million.

The film also points out that the official 9/11 investigation did not begin until 441 days after the attacks. Even more troubling to the members of the Steering Committee was the Commission's failure to answer 70 percent of their questions.

Among the unanswered questions highlighted in the film:

Why did U.S. military defenses fail to stop any of the four hijacked planes when there was a two-hour lapse between the first and last planes going down?

Why were the 500 fire department interviews conducted after 9/11 withheld from the public?

How could fire cause a steel-frame building to collapse?

Why was the U.S. Attorney General doing all of his air travel by specially chartered jet just prior to the attacks?

Why were surface-to-air missiles placed on the roof of the resort where Bush was staying the night before the attacks, when this wasn't usual procedure?

Why did Bush sit in a Florida classroom for a full seven minutes after being informed of the second attack?

Why did the U.S. military knowingly let Bin Laden and top Taliban leaders escape to Pakistan?

Why didn't the United States bomb Pakistan after discovering they financed the attacks?

And why isn't the media connecting the dots?

"It's a curious phenomenon," Thompson says in the film. "A lot of explosive information has been reported in the press, but it's been buried. If you put all the obscure stories together from the papers and TV news, you end up with a completely different narrative."

But Thompson leaves it to individuals to draw their own conclusions from the articles he's amassed.

"I just want to present my facts to people in as neutral a way as possible," he said in a phone interview. "Let the people come up with their own conclusions."

After countless hours spent poring over Thompson's timeline, Nowosielski came up with his own conclusion: "Bush's dereliction of duty caused 9/11."

To Nowosielski's credit, his conclusion is not voiced in the film.

The film's release coincides with the fifth anniversary of 9/11.

Draw your own conclusions
Viewers can see 9/11: Press For Truth at one of the following HopeDance screenings:

The "Complete 9/11 Timeline" can be viewed at www.cooperativeresearch.org.

Contact freelancer Shawna Galassi through the editor at rmiller@newtimesslo.com.