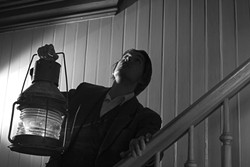 I have always been interested in horror films. I couldn’t wait for my parents to leave for the night, watching a creature feature in the dark den. If I wasn’t watching a horror film, I listened to Edgar Allan’s Poe’s Tell -Tale Heart on vinyl. Later, as an English student, I studied Poe’s The Fall of the House of Usher. I was drawn to Poe’s ability to delve deep into the psychological unconscious of his characters through his elaborate and fantastic descriptions—and let’s not forget that decaying house, and the abyss-like tarn that surrounds it. When production designer Michelle Aragon suggested that I write a story about a low-budget independent filmmaker’s latest work Lighthouse Keeper, I began my descent not into the basement to face my deepest fears, but into the world of independent horror-film director Benjamin Cooper.

Cooper is an Arroyo Grande native and former film student at Allan Hancock College. He also worked for the station on the hill, KSBY. Shortly after film school, he founded Thunderhead Entertainment with his wife Robyn.

“My goal is to make the movies I’m excited about making as a sustainable business,” Cooper told me in an email interview. He has ambitions to make bigger, better, and more pictures, he says, and he’s getting closer to his goal. To date, Cooper has directed five low-budget indie films: The Omega Diary (1999); The Brink (2006); Primitive (2013); The Conquered: Curse of The Shaman, in post production; and Edgar Allan Poe’s Lighthouse Keeper, also in post production.

“Lighthouse Keeper,” says Cooper, “will be the fastest horror picture I’ve delivered, from concept to completion.”

What keeps Cooper coming back to horror? The same, perhaps, can be asked of his audience: What’s so alluring about being scared?

In Steven King’s brief essay “Why We Crave Horror Movies,” he explains that we, the viewers, are drawn to horror “to show that we can, that we are not afraid, and that we can ride the roller coaster.” Cooper believes “we ride the roller coaster, or go to see scary movies because it “gives [us] a chance to face our fears and be brave.” He agrees with Robert Englund’s (aka Freddy Krueger) belief that “in a modern society horror movies serve as a rite of passage for young people.”

Benjamin’s rite of passage began with his interest in horror films of the ’80s, when he was just a boy.

“During this time, the MPAA was really cracking down on certain horror films, and so filmmakers had to be very creative engineering their scares to avoid the kind of blood and guts that would earn them an X rating. A Nightmare on Elm Street was a great example of that. I saw it when I was 12.” Cooper emphasizes that there are many flavors of horror, but “it was the imaginative fantasy horror pictures that I gravitate toward because of that upbringing: the Elm Street pictures, The Thing, House, and Evil Dead.”

“Each movie has its own challenges, but it usually comes down to time and money,” he says of his own projects.

The Brink was financed on Cooper’s credit card. A ghost thriller shot in the Central Coast, it centers on an engineering student and her friends, who find blueprints to and apparatus Thomas Edison had designed to enable the living to communicate with the dead.

“We had a shooting window right before Christmas. If we put it off, it would be delayed for weeks or months, so we plowed ahead. It turned out to be a very cold, wet winter and we had a lot of night shoots to get through. When it rained, the dilapidated house that was our key location could not be shot in, and the dirt road turned to a mud pit. We lost some productivity that way, and it was an exhausting, uncomfortable shoot, but we got through it. Watching it, you can’t tell. Some of the actors sport short sleeve shirts on screen, and we even dunked Rachel Riley into a tub full of ice cubes,” Cooper said.

The latest movie is based on the unfinished Poe work known as “The Lighthouse”—Poe himself left the story untitled—and the crew “consists of a great team of old collaborators and new from the Central Coast, Cuesta College, Allan Hancock, and some L.A. folks.” Jeff Miller (Axe Giant: The Wrath of Paul Bunyan) executive produces, and Vernon G. Wells, who played the villain in movies such as Road Warrior, Commando, Inner Space, and Weird Science, stars as the lighthouse keeper. The film is shot on location at the Point San Luis Lighthouse.

It’s easy to see why Cooper gravitated toward Poe’s final, unfinished story. The piece reads like a diary entry or sketch for a larger project. Poe begins:

“Jan 1 — 1796. This day — my first on the light-house — I make this entry in my Diary, as agreed on with De Grät. As regularly as I can keep the journal, I will — but there is no telling what may happen to a man all alone as I am — I may get sick, or worse … So far well! The cutter had a narrow escape — but why dwell on that, since I am here, all safe? My spirits are beginning to revive already, at the mere thought of being — for once in my life at least — thoroughly alone; for, of course, Neptune, large as he is, is not to be taken into consideration as ‘society.’”

Poe died mysteriously in Baltimore in 1849, never completing the work, which explores themes of isolation, and paranoia. Like many of his works, “The Lighthouse” can be read autobiographically. There are only four more journal entries, and the story ends abruptly with the structure of the lighthouse crumbling to chalk.

The story’s incompleteness didn’t stop Cooper from approaching the project. He wrote the treatment and hired Carl Edge to script it.

“I figured I’d take my cue from Corman and his writers’ adaptations, which were also very short, and invent a new story that has elements of the original, and also infuse it with themes and even character names from Poe’s body of work,” Cooper explains.

Unlike other projects of Cooper’s, “the whole show was riding on whether the crew could lock down the key location,” he says.

Built in 1889-1890, Point San Luis is the only surviving Prairie Victorian-style lighthouse on the West Coast, and creates a mysterious setting for the film. Equally important was creating appropriate props and interiors for the movie. This was where Lighthouse Keeper production designer Michelle Aragon came in.

“This project was all about finding props that fit a specific time period in a place that is very unique and somewhat desolate,” Aragon said. “It was one of those projects that kept me up all night doing lots of research. I wanted that perfect prop.”

Aragon’s tireless search is a fitting example of the lengths to which Cooper and company must go to conjure the feelings of maddening isolation experienced by Poe’s tortured narrator.

“Besides,” Poe writes, “I wish to be alone ... It is strange that I never observed, until this moment, how dreary a sound that word has — ‘alone’! I could half fancy there was some peculiarity in the echo of these cylindrical walls — but oh, no! — this is all nonsense. I do believe I am going to get nervous about my insulation. That will never do.”