The judge called Peter Miller to the stand, and in less than two minutes, his legal troubles were behind him. A fleeting look of disbelief passed over his face, testament to the one year, eight months, and 17 days he spent under the criminal spotlight. 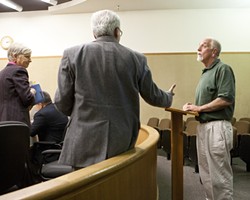 Deputy District Attorney Sandy Mitchell filed a motion at the onset of the hearing to dismiss Miller’s case, given that jury instructions approved at his last significant hearing in May 2011 allowed him to defend that he was providing medical marijuana under California’s Compassionate Use Act.

Jury instructions are a list of guidelines, issued by a judge, which jurors must use to interpret legal issues surrounding a criminal case. Given the legal gray area that is California’s medical marijuana program, the previous judge, Barry LaBarbera, said at the time he preferred letting a jury decide if Miller was following the law.

Miller, 57, was the former operator of the Paso Robles-based Harmonic Alliance collective, which, he argued, served only qualified medical marijuana patients through a delivery service. He was arrested in December 2010 with 11 other mobile dispensary service operators during “Operation Green Sweep” headed by the former regional narcotics task force in which undercover San Luis Obispo police officers posed as legal patients.

The District Attorney’s Office didn’t file charges against three of the once-defendants, but the office followed through with the remainder of their cases, on its basis that accepting cash in exchange for marijuana is illegal, in any fashion.

During Miller’s case, LaBarbera stated he was unwilling to agree with the prosecutor’s interpretation of state law, which set into motion a series of dismissals against the other people arrested, all at the request of the DA.

Up to this point, however, prosecutors have dismissed cases only to immediately appeal them to the state, in an effort—they say—to urge the higher courts to better define what is legal. Office Spokesman Jerret Gran, however, told New Times there are no plans to appeal Miller’s case. As for the remaining six cases that have been appealed, they will continue through the process, which could take years, Gran said.

Miller, however, said he wishes he could be vindicated with the same public attention with which he was arrested when his mugshot was splashed across the daily paper’s front page.