Photos By Beth Giuffre THE FOUR TOPS Chosen from our growing pool of amazing chefs, these four entertained the public with their super culinary skills and charming anecdotes at this year's Chef Showdown. From left are Libry Darusman of Thomas Hill Organics; Will Torres of Farmhouse Corner Market in SLO; James King of Somerset Grill in Pismo Beach; and Julien Asseo of Les Petites Canailles of Paso Robles.

Best of the best

The Enjoy SLO Chef Showdown took place Feb. 23 at the Paso Robles Event Center. Hundreds of foodies flocked to the event center to witness the face-off between chefs James King of Somerset Grill in Pismo Beach, Julien Asseo of Les Petites Canailles in Paso Robles, Libry Darusman of Thomas Hill Organics in Paso Robles, and Will Torres of Farmhouse Corner Market in SLO. Produce was provided by Talley Farms, meat by Larder Meat Co., and olive oil from The Groves on 41. The event was hosted by Patrick Brooks of Wine Shine. The judges were Stew McLennan, winemaker of Sharpei Moon Wines and founder of the Garagiste Festival; chef Rachel Ponce of Pair With; and Stanley Barrios, owner and winemaker for Top Winery. For video footage of the event, visit enjoyslo.com.

The Chef Showdown started out like something on one of those Food Network competition shows: four top chefs creating gorgeous masterpieces in a studio kitchen.

But this was on the Central Coast, at the Paso Robles Event Center before locals' very eyes. The audience even participated in judging after visiting the tables of small bites from each of the dueling top chefs: James King of Somerset Grill in Pismo Beach; Julien Asseo of Les Petites Canailles in Paso Robles; Libry Darusman of Thomas Hill Organics in Paso; and Will Torres of Farmhouse Corner Market in SLO.

I saw a couple of middle-schoolers trying Torres' beef tongue for the first time and nodding to their parents. "It's actually good!" one said.

For his small bites offering, chef King made a hobo stew, a twist on his mom's recipe, in a cup that warmed me into comfort heaven, especially after hearing his story about its Dust Bowl/Great Depression origins. Chef Darusman won me over with his homemade pasta, and I was delighted to have such a big portion of chef Asseo's beef cheeks and truffled mashed potatoes. 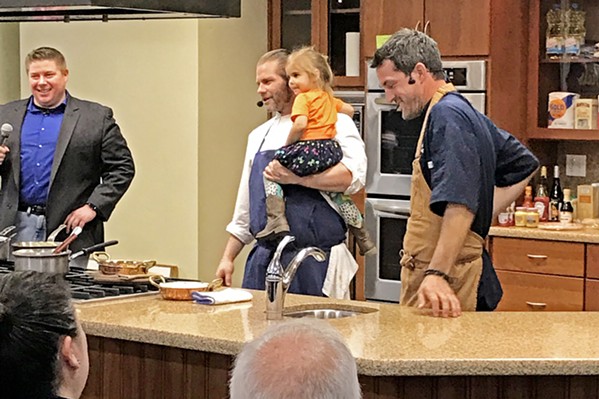 Chef Asseo ended up winning the People's Choice award for those tender, melt-in-your mouth, slow-cooked braised beef cheeks served with light and earthy celery root puree. Those small bites were the perfect winter dish, braised in veal stock and red wine with carrots, onions, and mushrooms. Having grown up in France, he's accustomed to cooking with different cuts of meat.

"They're every bit as good as a rib-eye steak if you know what you're doing," said Jensen Lorenzen of Larder Meat, visiting the chefs onstage.

Patrick Brooks, co-owner and distiller of Wine Shine and host of Everything Paso Robles, hosted the Feb. 23 event. Full of life, humor, and charisma, he talked about the love of bacon (which he calls "meat candy"), and reminded all the chefs they are winners just by being there.

After facing off in the small bites contest, the chefs went into a first round blind competition of a dish of their choosing, with King versus Asseo, and Darusman versus Torres. The winners of that round went on to the final showdown.

As it turned out, Brooks was right: They were all winners. In the first round, the point spread was only a 10-point difference (out of 185), and for the second round, chef Asseo ended up facing chef Darusman, chosen from a mere five-point spread.

The contest was a family affair—not just for the spectators. Chef Asseo's little pixie of a daughter was running all around the stage. Chef King's identical twin brother came from Texas to show his support. Chef Darusman had a gang of Thomas Hill Organics groupies show up in support, yelling out, "Go Libry!'" And chef Torres was chatting and visiting his support crew in the audience between rounds, hands in his front pockets, like the jolly fellow he is.

The competition also felt at times like a seminar, with chef Asseo noting that the key to making shepherd's pie is "low and slow"—low heat, and you can use bone marrow to replace butter for a silky touch.

"I put plenty of butter in, that's the French in me," he said, adding later that he uses the French native Espelette pepper to add subtle heat to many of his dishes, often in place of black pepper.

Chef Darusman made fire and liquid-nitrogen steam with his preparations. A big fan of the juxtaposition of hot and cold on the plate, he likes to play with temperature, and he knows how to make a mean cauliflower rice flavored with citrus and almonds. In the first round against chef Torres, Darusman used the rice as the cold component. He used liquid nitrogen in a blender to make mysterious fog flow forth. He shared technical expertise about ground beef and rice, Brazil nuts, mousse and ginger—fire and ice—all of which went totally over my head.

In the end, Darusman made a two-part masterpiece with more colors than the most beautiful rainbow, reminiscent of sushi and sashimi.

Chef King made a traditional beef and stout shepherd's pie topped with melted sharp cheddar. He listed all the ingredients—onions, garlic, carrots, mushrooms, herbs, "and a bunch of stout ... I even put some in the food actually," he said.

Chef Torres made Filipino-style congee for the first round showdown with chef Darusman. Torres said he grew up with Filipino friends and found inspiration in their cooking. His version of congee was all fresh, local ingredients. He used fluffy Arborio rice; chicken, pork, and beef stock; ginger; black garlic; shallots; chilis; and vinegar, giving us tips on texture, flavor, acid, and fermentation.

Asseo went on to earn the most points in a blind tasting to woo the judges. The New York Times has already singled out and praised Asseo's new restaurant in Paso Robles, Les Petites Canailles, which means "little rascals" in French. Chef Asseo joked that he probably should have chosen something that's easier to pronounce, but he wanted the name to portray a casual environment that feels like home.

Asseo is every bit as charming as you would expect. He told us he learned much of what he knows from his mom, an amateur chef but the best chef he's ever known and someone who always spices meals to absolute perfection.

Then came the final showdown featuring the bag of weird food ingredients. Asseo and Darusman had to use liver from Larder Meats, and there was bacon in there too; gorgeous veggies from the Talley Farms CSA box; Flamin' Hot Cheetos, Patrick Brooks' Wine Shine brandy. And Spam. Seriously?

"I get the brandy," I said to the gentleman next to me. "But why the Cheetos?"

He said, "You know Spam was invented during World War II for the soldiers?"

If this were a football game, the Spam is like having an alien from Area 51 subbed in, and those unnatural bright red chips—that's like having a crackhead on the team. The real challenge: The chefs had to use all mystery items as main ingredients.

On one side of the Presentation Kitchen, Darusman was cooking with fire. Literally. He was so entertaining. Brooks asked him what was going on in his mind.

"Spam and Cheetos, I guess," he said.

Darusman's final dish looked amazing. At the end of the 45 minutes, he leaned back and let us see his plate—it was a Spamy, brandylicious, liver dream (and breaded and branded in Cheetos).

Across the kitchen, it was apparent that Asseo had never tried Spam.

"Zat's not fresh at all," he said with a refreshing amount of humor.

He paused for a moment, then came up with a game plan, which eventually earned him the $1,000 prize for best dish.

As he was cooking, Asseo took some swigs out of the Wine Shine brandy.

"Do I get to keep this?" he asked Brooks.

Brooks laughed and said, "Yes you do, my friend." Δ