Find a whole rainbow of foods in one place at Talley Farms' winery, farm stand, and berry patch u-pick

The Talley Farm Stand at Talley Vineyards is open June 29 to Nov. 3, every Saturday and Sunday from 10:30 a.m. to 4:30 p.m. It offers fresh, organic fruits and vegetables, a u-pick berry patch, a pumpkin patch (in autumn), wine tasting at the winery, picnicking on the grass, and farm and winery tours. Talley Farms is located on 3031 Lopez Drive, Arroyo Grande, on the way to Lopez Lake.

Years ago, while working at Bay Area farmers' markets for a Watsonville-based farm, I learned that the food sold at farm stands and farmers' markets is usually picked fresh that morning. By the time the sun comes up and the produce is arranged on the farm-stand tables, the quality is so superior to store-bought that you wonder why people shop anywhere else. 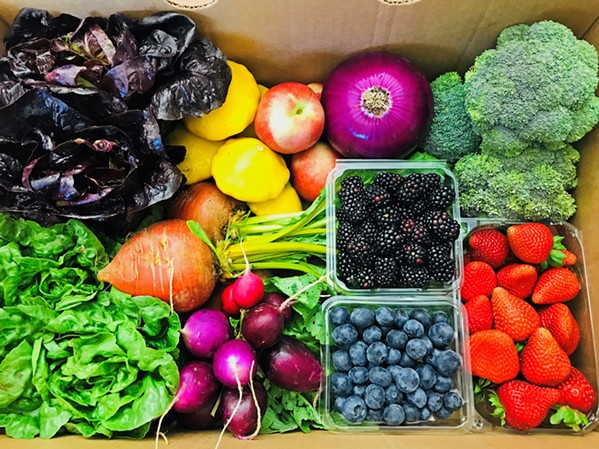 There's nothing like the whole experience of shopping straight from the farm—the feeling is right, like hand-writing a letter on quality paper and sending it with a real stamp.

Talley Farms and Talley Vineyards in Arroyo Grande make it easy for me to get my fix of fresh and organic everything. The family farm is known for its CSA boxes and estate wines, but it doesn't stop there. This summer marks the third year that the farm has opened up a weekend stand and berry u-pick patch.

On June 29, Talley held a farm-stand celebration, and I took my family to check it out. We already subscribe to their weekly farm share because we dig eating what's local, organic, and in season.

"This is the first time that we had a harvest market [celebration], but this is our third year for the farm stand," said Andrea Shapiro Chavez, manager of the Fresh Harvest CSA program.

Her favorite Talley farm item is the "sweet bi-color, non-GMO corn." She and her husband, Randy—who works quality control at Talley—were warmly greeting the meandering visitors who came to the stand on opening day.

"We started the farm stand to bring together the farm and the winery," Shapiro Chavez said, adding that there was a need for local produce, and Talley felt most comfortable in the farm atmosphere.

The road to Talley is one of those over-the-river-and-through-the-woods Edna Valley day drives, so don't be in a rush. It's worth the trek, as Talley is the final stop of nine local farms and ranches on the newly promoted SLO County Farm Trail, an "agri-CULTURAL" experience (as coined by FARMstead ED founder Lynette Sonne, who attended Talley's opening celebration).

The produce at Talley is picked from their 1,500 acres of surrounding farm, 7 miles inland from the Pacific Ocean. The farm uses university-trained agronomists, a full-time engineer, sustainable farming practices, and only non-GMO seeds. Many of the fields are USDA-organic certified, but even in the conventional fields, the Talleys use organic herbicides and pesticides.

The Talley family farming tradition dates back to 1948 when Oliver Talley started growing broccoli, beans, cauliflower, peppers, and tomatoes as the first five crops. The farm was passed down to Oliver's son Don in 1963, and youngest son Kenneth in 1963. In the '60s and '70s, the family bought more land, built their first cooler, and started the shipping process.

When Kenneth passed away in 1976, Oliver retired and Don became president of Talley Farms until 2006. Don and his wife, Rosemary—with the help of Brian, Todd, and Ryan Talley—have been hands-on, innovating and growing the farm ever since.

"When I started the farm-box program, most people didn't even know Talley had a farm," Shapiro Chavez said. "The farm has been here for over 70 years, and the winery has been here over 30, but more consumers connect with the winery."

The family and employees at Talley often give tours of the farms, work booths at festivals, and speak about sustainable farming at local events.

When it comes to their produce, word on the street is that their kiwis, bell peppers, and Brussels sprouts have made Talley Farms pretty famous.

At the farm-stand celebration, my son Luke had already picked out his cantaloupe, so heavy and sweet we could smell it from the bottom of the bag. I had to get a hold of those French beans, as Shapiro Chavez said they may not be around too long. We paid for our u-pick containers and headed over to the rows of berries.

I was glad each row was clearly labeled with yellow signs. We made sure to pick the gold, sweet, floral-tasting sunshine raspberries that were soft and easy to pull. The olallieberries were more sweet than tart and the perfect cross between a raspberry and a blackberry. The fuzzy little black loganberries were soft and juicy.

One of our biggest highlights of the day was following all the rows down and around to the long, green, tree-like mulberry "bushes" where each of us tried our first mulberries.

"Make sure you get the dark ones," Shapiro Chavez had said.

"Could these be mulberries?" we wondered as we discovered the long, skinny, dark purple mulberries that looked like an unfortunate blackberry had been stretched in a torture chamber. We put a couple in our carton but decided the taste was less sweet than the other berries and a little tart.

All in all, Talley may be the ninth stop along the new SLO County Farm Trail, but it ranks high on my list of ag adventures, with its trifecta of wine tasting, farm-stand shopping, and u-pick all in a weekend! Δ