Take off that adult-y mask you’ve been wearing all this time, and toss it aside. Jump back into the juvenile, unadulterated role of a child with Kelrik Productions as it presents the musical performance of Peter Pan. Indians, pirates, a ticking crocodile, fairy dust, a guy with a hook for a hand, flying effects, and a cast of 34 local players—what more could you really ask for? 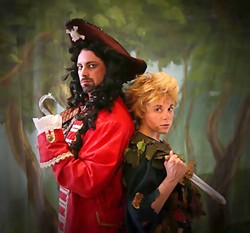 You know the story: Peter’s the juvenile delinquent who managed to escape responsibility and encapsulate the bliss of childhood. He is the essence of naiveté and iconic youthfulness. Peter inspires Wendy, John, and Michael to join him in flight—with a little fairy dust, of course—and they take off on a journey to Neverland. There, our rag-tag group finds adventure with the Lost Boys, meets a tribe of savages, go toe-to-toe with pirates, and face the maniacal Captain Hook.

Kelrik Productions’ 50-person cast and crew will present the 1954 musical rendition of J.M. Barrie’s original novel, originally starring Mary Martin. The play is directed by Lauryn Judson and multi-tasker Erik Austin, who will also play the roles of Hook and Mr. Darling. 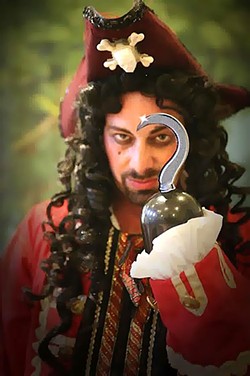 “I’m excited for the whole production. It’s a childhood favorite for most people,” Austin said.

“It’s definitely a dream role,” Skanes said. “It’s about finding that youthfulness of a child with as much knowledge as I have now.”

Skanes’ enthusiasm for the role began when her grandmother introduced her to the 1954 version as a child; since then, she’s always wanted to be Peter (who wouldn’t?). So, how do you transform into a Peter Pan?

“I have to lower my voice a little bit to have the timber of a boy and the coloring of a British accent,” Skanes said, demonstrating her accent. “It’s also been about finding how children speak. Their voices go up at the end of their sentences.” 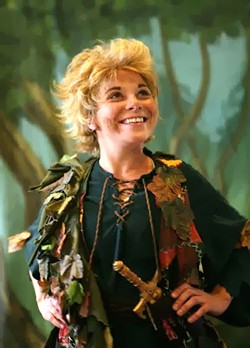 She found that looking through various pictures of Peter Pan from different movies, books, and performances helped her get into character. Skanes even read the prequel to Peter Pan, The Little White Bird, by J.M. Barrie.

After about a month of rehearsals with a few promo shows sprinkled in between, the cast is starting to reach for new heights. Literally.

The live show will include flying effects by ZFX, enabling actors to soar above the audience. According to organizers, the airborne performance will be a real treat for audiences, bringing the magic of Peter Pan to reality.

“I’m not a fan of heights,” Skanes said. “I’ve had to take baby steps towards getting into that harness. Wendy and I have been going to the Crux gym, and it’s actually become very therapeutic.”

Despite her fears of heights, Skanes likes harnessing her inner child.

“I’m thrilled and excited to pass on such a great story of youth, growing up, and the belief of fairies,” she said.

This version of Peter Pan has some similarities to the original but isn’t quite like the Disney version you may have seen as a tot. Tinker Bell is not the Marylyn Monroe-esc babe that you are accustomed to. She is instead a ball of light. You needn’t worry, though. Her sass level is still high.