It’s been more than a year since the Central Coast Regional Water Quality Board launched its investigation into how high levels of a toxic chemical solvent leaked into groundwater wells in the Buckley Road area of San Luis Obispo, but new testing later this year could provide additional insights.

After a battery of tests ruled out the nearby San Luis Obispo Regional Airport as the cause of the contamination, the investigation turned to properties that were singled out as possible sources as early as 2013. 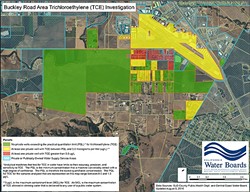 Board investigators sent letters in November of 2016 to the owners of three commercial properties clustered near the intersection of Buckley Road and Noll Road that the property could potentially be the source of the solvent trichloroethylene (TCE) plume that continues to linger in the area.

One is a property located at 4665 Thread Lane. It’s home to the Noll Machine Shop, which has operated on the property since the 1960s. According to the letter, sent to property owner Janice Noll Nov. 17, the board stated that it had records indicating that industrial solvents were used on the property.

“Waste manifests going back to 1993 do not indicate that TCE use,” the letter stated. “However, Noll Machine shops material safety data sheets indicate the use of 1,1,1-trichlorone, a common replacement for TCE, and Noll could have used TCE before manifest records were available.”

Alan Strasbaugh, the owner of a property located at 825 Buckley Road, received a similar letter Nov. 17. According to documents obtained by New Times, the property was home to some industrial businesses, including a semiconductor manufacturer, a powder coating businesses, and a metal fabrication and welding shop as far back as 2010. According to the board’s letter, the property wasn’t developed until 1990, at least 20 years after businesses began to phase out TCE. But the letter noted that bans on the sale and general use of the chemical for metal and degreasing didn’t go into effect until 2005, and waste manifests from the property indicated that solvent mixtures containing low amounts of TCE may have been used.

“Although environmental documents indicate that prevalent TCE use did not occur at [the property], it does not preclude the possibility that some TCE was disposed of via the septic system or disposed of illegally on your property in the past,” the letter stated.

The third and final letter was sent to John Coakley, owner of a property located at 795 Buckley Road.

While environmental databases indicated that the site didn’t generate any kind of hazardous waste, the letter stated that records showed steel manufacturing had occurred on the site, and that 55-gallon drums were stored near an impacted and active supply well at some point. The letter also raised questions about an abandoned and partially destroyed well documented on the property in 2014.

“Abandoned wells with inadequate security covers have been known to be a source of groundwater pollution when waste is disposed illegally down a well,” the letter stated. “The partially destroyed well could have been such a conduit before cement was placed in the well.”

According to the letters, owners for all three properties met with water board representatives at its regional office Nov. 14. Coakley, Strasbaugh, and Noll did not respond to requests from New Times for comment.

In 2013 the board sent letters to all three properties requiring them to provide information about the use of TCE. The board was provided with reports based on limited testing on all three properties, none of which revealed a “smoking gun” for the the cause of the contamination.

Thea Tryon, a senior engineering geologist for the board, said the new round of testing would be more intensive than past testing.

“It wasn’t a very in-depth environmental investigation,” she said.

Tryon said the scope of the contamination also played a role in looking outside those three properties.

“Because of the size of the [TCE] plume, we thought the source might be bigger,” she said.

The new round of testing will require deep soil and gas samples, as well as deep groundwater samples. The letters indicated that powerful sonic drilling equipment used to drill through hard layers of clayey sediments at the airport would likely have to be used on the properties.

“The primary focus right now is to find that source and stop it from getting into the groundwater,” Tryon said.

The property owners are required to submit work plans for the testing to the board by Jan. 16.