I'm jazzed about Chow, the new sister to Novo in downtown SLO 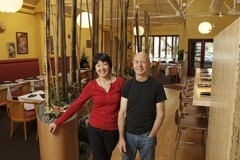 Over a combined 30 years of working in and writing about the restaurant industry, I’ve seen many creative people open restaurants that had real potential for success. Sadly, they failed, not because of concepts but because many creative people lack business savvy. Of course, a bad location is just as often to blame for the failure of great restaurants. Restaurateurs who are passionate, creative, and business-minded know it takes all of those talents to succeed. That’s why I’ve always respected Robin Covey and his long-time business partner Shanny Covey, who have proved their expertise once again at their new Chow in downtown SLO. Although it’s been open only two weeks, I dined there three times and walked away quite pleased after every visit.

In 1985, the Coveys established Robin’s in Cambria and it’s still among the most popular restaurants in SLO County. When Robin opened Novo, his international concept in SLO, it was embraced by the community for its food and ambiance. During the closure of Novo for retrofitting, Robin opened Chow Novo to keep his staff employed, and we all loved that tiny eatery. I was bummed out when he closed it but he wanted to concentrate on restoring Novo, and once again it was received locally like an old friend returning home. I’m happy to report that the defunct Chow Novo has been brought back to glorious life in its new guise as Chow, and after three meals there, I’m jazzed about this eatery dedicated to Chinese, Vietnamese, Korean, and South East Asian cuisines.

Ironically, my editor asked me if I was going to review Chow right after it opened and I said no. I explained I didn’t think it was fair to any restaurant to review them until they had been open at least a month. But I started hearing the talk about Chow right away and it was all good. Even the reports on Facebook, which can be brutally honest and occasionally unfair, were glowing. So I couldn’t stay away, and I’m glad I did go right away. On three different visits with friends I enjoyed fabulous foods and impressive service. I know what you’re thinking; of course I got good service. Honestly, during the first two visits, neither Robin, Shanny, or their son Jai Covey was there, and the new young servers had no idea they were waiting on New Times’ restaurant reviewer as I didn‘t make reservations.

My first visit was with my friend, Peggy Bojduj (aerobics instructor at Kennedy Fitness Center). She’s gluten-intolerant and requires foods prepared without wheat. We discovered Chow has a gluten-free menu, though unfortunately it wasn’t available yet. No problem, our server Laurie told us, she would talk to the chef about it and he was fine about accommodating our request. We ordered the shrimp with rice noodles and bean sprouts in a medium spicy coconut milk broth ($11). Normally the shrimp are dredged in flour and stir-fried, but they skipped the first step. The dish was fresh and tasty; my only complaint was that it wasn’t spicy enough. Next we shared the salt and pepper quail with gingered vinegar and cucumber ($16). Fried, it had a crispy skin and intriguing spicy flavor, which was enhanced by the tangy sauce. I had to admit I preferred the Novo version of quail, yet we enjoyed every bite. Another friend warned me she tried the pea shoots and didn’t like them because they have no pea pods, just tiny vines with leaves, fried garlic, and soy sauce ($6). Peggy and I loved the tender vines with the contrast of the crispy garlic.

My second visit was with longtime friend Linda Lewis (volunteer coordinator for the Central Coast Wine Classic). We each ordered our own food, as she wanted to try the Pho with tofu ($8). During one visit I asked the server how to say it: “It’s pronounced fu without the other two letters.” We laughed heartily and now I’ll never forget. The soup dish includes rice noodles in a heady broth with the additions on the side plate: chile and bell peppers, bean sprouts, and cilantro, allowing guests to add them to their preference. I started with crab cakes ($10), very crispy and over-browned but still enjoyable. This time the sriracha aioli for dipping the crab had the perfect amount of spicy bite for my taste. Then I had the lunch special of Kalbi ($8), braised short ribs with kimchi, fragrant Jasmine white rice, and stir-fried sugar snap peas with julienned carrots and onions. I enjoyed every bite, and enjoyed the beef which was spicy, but not spicy-hot.

My last lunch with Laura Ward (owner of Ward Wines) proved a surprise: we hummed over the stir-fried crab and bacon wontons ($12) with galangal ketchup; and the delicious salmon with chilled green tea soba noodles and a wonderful white miso-lemon dressing ($13). At first, I wasn’t interested in the Dong Po ($8 lunch special), Chinese roast belly with vegetable pickle, although two people told me it was excellent. Nah, it was fabulous, a prime example of the sense of the fifth taste the Japanese call umami. We shared it and exclaimed over its outstanding flavors of spice and sweetness. It was perfect with the German Dr. Loosen 2008 Riesling by the glass ($10).

Robin has Novo chef Justin Gabbert heading the kitchen at Chow. They’ve created a menu that’s true to the various Asian cultures, but they won’t be including Thai or Japanese dishes. Robin and Shanny took their chefs on a culinary excursion to San Francisco, where like myself, they were enamored with famed chef Charles Phan’s (of the outstanding Slanted Door) new restaurant, Heaven’s Dog. “Justin and I were on the same page at Heaven’s Dog; we said this is exactly what we want at Chow,” Robin recalled. “The food at Chow will be fresh and seasonal, and we plan to have one of the cooks shop the farmers markets thrice-weekly for locally grown ingredients.” As always, the Coveys expressed their appreciation for the people who work for them: “We have a really excellent wait staff and kitchen team. Shanny and I feel confident we’ll be busy and need to be at the top of our game.”

From what I’ve experienced of their food and service so far, it’s obvious Chow will be become as popular as Robin’s and Novo among San Luis Obispoans for its distinctive dining experience. I also know this: As they become more comfortable in their new surroundings, Chow will rise to the top of its game, and still keep getting  better.

You can reach New Time’s Cuisine columnist at khardesty@newtimesslo.com.