Fire on the mountain: Cuesta blaze continues to burn

View a slideshow of photos from the Cuesta Fire.

A thick cloud hung low across the town of Santa Margarita the night of Aug. 18 as the Cuesta Fire burned for a second day. In the near distance a tower of smoke rose from wooded hills, and helicopters darted in and out of the pyre dropping buckets of water. Black cows ruminated nearby. At press time more than 3,500 acres of dry grass, chaparral, and forest burned as the fire grew south of Santa Margarita. It was 15 percent contained. 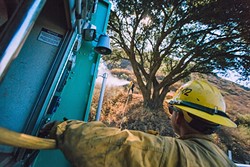 The cause of the Cuesta Fire, and two other fires in neighboring counties, was apparently a truck dragging a chain on Aug. 16. The fire moved into the Santa Lucia Wilderness Aug. 17, where it is expected to spread. Close to 900 people were working on the fire Aug. 19, down from 1,000 the day before. Six helicopters worked on the blaze as well as 89 fire trucks, two air tankers, and nine dozers. The fire threatened hundreds of structures, and a mandatory evacuation remained in effect for the town of Santa Margarita.

Residents responded to the evacuation order with mixed enthusiasm. School was cancelled, and most children seem to have been evacuated. Horse corrals stood empty, downtown businesses were shuttered, and yet many residents chose not to leave. One resident erected a set of camp chairs in his font yard to watch the fire. Other residents walked dogs or rode bikes around quiet streets as fire trucks, dozers, and sheriff’s deputies rolled past. For longtime residents, such fires are a part of life.

Santa Margarita was threatened earlier this summer when the Park Hill Fire broke out east of town. Eight homes and several outbuildings burned in that fire, which spanned about 1,800 acres. That fire was also caused by a car, according to Cal Fire. Santa Margarita resident, Mark Tomes recalled barbecuing steaks for breakfast with his dog during the Highway 41 fire in 1994. The town was evacuated then too, but he didn’t leave. Residents lost power, hence the steaks.

“It’s been exciting. In a crazy sort of way,” Tomes said on Aug. 18. “Last night was scary. …We just watched, and we saw it explode. Burst into flames. Huge columns of smoke and flames.”

Tomes said he found out later that what he saw was a backfire intentionally set by firefighters to keep the flames away from Santa Margarita. It worked.

The fire came within a quarter mile of the town Monday night, when Cal Fire issued the order to evacuate. Though residents were somewhat blasé about the blaze, Cal Fire Public Information Officer Bill Murphy said residents need to be alert. The prevailing wind blows northeast, but a strong onshore wind would push the fire back toward Santa Margarita, and it could happen quickly, he warned.

“People need to be aware of the fire conditions,” Murphy said, “And they need to be ready to leave at a moment’s notice.”

Murphy said several factors are making this blaze challenging and unpredictable. The terrain is rough and undeveloped. The wind has been steady. And the prolonged drought in California means that vegetation is extremely dry. Native oak trees, which typically don’t burn, are too dry to withstand the flames this year. They smolder for hours after the fire passes, threatening to reignite vegetation with a traveling spark when winds pick up.

If there is an upside to the fire, it may not be visible for several years. The area that is burning now hasn’t seen a fire in three decades, and though it’s destroyed more than 2,500 acres of open space, it will bring new life, too. Cal Poly botany professor Matt Ritter said a lot of plant species depend on fire to reproduce.

“Fire is a natural occurrence in our Mediterranean climate,” Ritter said, “and every native species has some adaptation to deal with fire.”

Ritter pointed out that the oaks on Cuesta Ridge have probably survived many fires already, and some species of ceanothius, manzanita, and pines actually need fire to reproduce.

There’s also a group of plants called “fire followers,” which can live for half a century as seeds until a fire causes them to germinate. Ritter said they typically have vibrant flowers, which bloom, produce seeds, and then disappear, while their seeds wait for the next fire.