Fire up the grill: Central Coast Meats delivers fresh and local to your door

Visit the farm, check out the subscription box options, learn about the Central Coast Meat values, and order your own meat box at centralcoastmeats.com.

Kyle Clement grew up in a farming family in Santa Maria. He eagerly raised 4-H and FFA livestock, mended barbed wire till his fingers callused, and wielded a branding iron, too. He learned to drive a tractor while many youngsters were more interested in driving to the club.

By all appearances, his maturation into a full-fledged farmer was quite traditional, right down to the denim. Time-honored farming knowledge had always been passed down to the younger generation, a rite of passage. He, like his buddies, accepted this way of life without question. 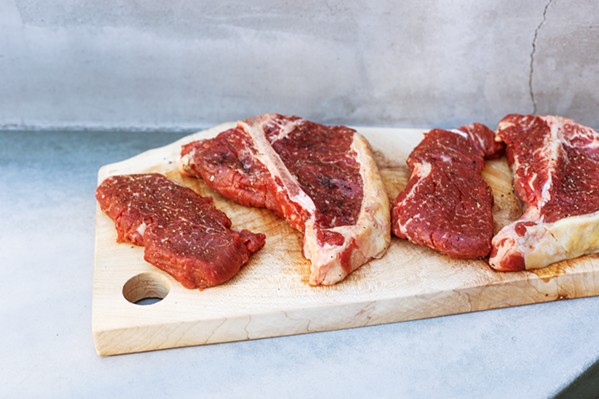 Then Clement started to notice something. Well, the whole world had noticed, but it hadn't been really getting through to the old-time farmers. It was 2015. Things just weren't quite right out in the field. He noticed that commercial farming practices were wreaking havoc on the environment, the livestock, and our health.

There had to be another way.

"We came to a monumental realization: Current farming methods are in dire need of regeneration. A holistic approach that supports our local and global environment, has the consumer's health and best interest at heart, and aligns with the animal's true nature to forage and roam, was both crucial and scarce," Clement has written of this epiphany.

He and his fellow emerging ranchers were faced with a dilemma:

"Do we turn a blind eye and rely on current, though adverse, practices? Or, do we honor our values and beliefs, and forge our own path?"

As Clement tells the story now, the answer was clear.

He and fellow rancher Dylan Sweet now share the double role of CEO and co-founder of Central Coast Meats. What started as a college marketing project has blossomed into a full-fledged subscription box business—one that Clement hopes will make local meat more accessible to local people.

Along with co-founder and Director of Farm Operations Thomas Matthews and Marketing Coordinator Nicole Fausey, the team is on a tear to reset the local meat standard through transparency, education, innovation, and integrity. If this sounds kind of serious and business-y to you, there is a reason. This is the company's mission statement, and they are dead set on this goal.

To say that Clement is earnest is an understatement. He talks about meat like it's his religion, because—for him—it kind of is. His crew is taking on the Herculean task of providing 100 percent grass-fed beef, pasture-raised pork, and pastured-raised poultry—all raised on the Central Coast without the use of hormones or GMO and soy-laden foods—directly to the people. They're working with the Cal Pol Center of Innovation and Entrepreneurship incubator to tweak their vision and gain investors. They're out there pounding the pavement and shaking hands. You wouldn't think this would leave much time for ranching, right?

You'd be wrong. Never underestimate the work ethic of a tried-and-true rancher!

The team's chickens come from a hatchery in Gonzales, just north of their own farm in SLO (a second Central Coast Meats farm is located in Shandon). Clement's pigs are also bred and raised on the team's own farmland through an in-house breeding program. The beef is calved and raised on the farm, too (in cooperation with Avenales Cattle Company).

"These cattle graze irrigated pastures, right alongside our other animals," Clement said. "We wanted to raise our animals in the way that they were designed to live, with as little human influence as possible."

But how does the meat get to your plate? Human interaction is certainly needed for this task. Clement said he was inspired by the subscription business boom (think Dollar Shave Club and a zillion others you probably already use).

The idea was to take all the guesswork out of buying responsibly farmed local meat—a task that can feel cumbersome at best (I can relate to staring at a package of ground beef for more than a few minutes, trying to decode what "local," "natural," or "organic" really means.)

"You go to Whole Foods and you buy a grass-fed steak, and it was probably imported from New Zealand. You have no choice of ever tracing that," Clement said. "Our products are completely traceable because we keep a timeline from the time the animal is born and throughout its life cycle."

Consumers also want to produce less waste, especially in SLO County, where "plastic straw" and "Styrofoam" are dirty words. That's where Central Coast Meat's handy eco-friendly, biodegradable, insulated shipping boxes come in. To order, pick up your iPhone or laptop. You can choose to purchase a one-time box filled with local meat or go for a monthly subscription of 5 or 10 pounds. You'll even receive your shipping notifications so you know when to expect your delivery.

Yes, millennials will change everything in this world we live in. I personally think they deserve a little credit.

While some older farmers may scratch their heads at these new advances, Clement said it is time for the younger generation to show the previous set what the future can be, with a little imagination and a whole lot of retooling. Knowledge need not only be passed down—sometimes it can, and should, be passed up. 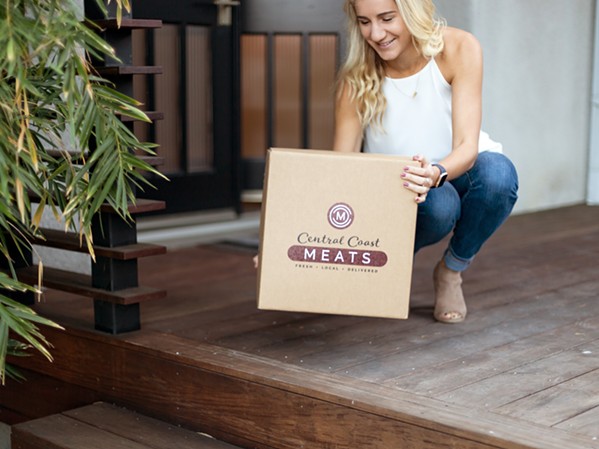 Rather than being bogged down by present-day commercial farming standards, Clement and Co. are cutting ties and taking a risk.

"The generational gap in agriculture has never been greater, and we realize now is the time for us young farmers to make a difference," Clement said. "We genuinely care about what you are putting on your family's dinner table. You and your family have the right to transparency and wholesome food. You also have the right to a damn good dinner on a Friday night, and a few beers to get you there, if you so choose. We are here to make sure that happens." Δ

Hayley Thomas Cain loves roasting a whole chicken, especially a happy one pasture-raised sustainably on local land. She can be reached at hthomas@newtimesslo.com.