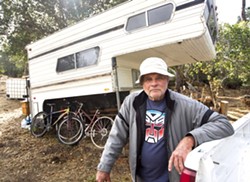 But Macagni isn't the only man facing prosecution as a result of the Hill Fire.

One of the fire's victims, William Carlyle, 76, could face double Macagni's punishment for alleged code violations committed in the wake of the blaze. Since shortly after he lost his home in the fire, Carlyle has lived in a camper parked on his undeveloped residential lot in Cambria. Carlyle's presence sparked complaints from neighbors and a county code enforcement case.

On Dec. 8, the SLO County District Attorney's Office filed two criminal misdemeanor charges against Carlyle for "illegal use of a recreational vehicle for residence" and for "establishment of an accessory use ... without first having established a principal use" on the property.

Carlyle faces up to one year in jail and/or $2,000 in fines for the alleged crimes. He's pleaded not guilty to both charges.

"It's a funny and screwed up world," Carlyle told New Times.

Carlyle continues to live in the travel trailer with his personal belongings in Cambria. He said returning to his torched Santa Margarita property isn't possible due to poor air quality. He also believes he's suffering from post traumatic stress disorder from the experience.

"I don't know how to deal with that," Carlyle said. "I could not be healthy in Santa Margarita."

"It's been really, really rough because I have the camper but no heat in it," he said. "So I'm freezing my butt off."

Considering his legal defense, Carlyle said he's aware of "constitutional cases" that pinned local ordinances against personal property rights where defendants came out on top. A public defender, Mitchel West, is assigned to his case.

"There's a possibility somebody will say how far can this go before a man can use his property?" he said.

Carlyle acknowledged that several Cambria residents are displeased with his stay.

"There are quite a few people who want to see that camper gone," he said. "I'm one of them, let me tell you."

Carlyle has a pre-trial conference in SLO County Superior Court on April 16. Δ