Lobster corndogs. Ramen burgers. Ice-cream-cone cannoli. Foodies far and wide are being treated to boundary-pushing hybrids on their plates, and now two Central Coast beverage makers are bringing a fanciful blend in the form of a six-pack.

Firestone Walker brewmasters teamed up with Niels Udsen, owner of Castoro Cellars, to create Rosalie. She comes in slim pink cans, with her name in pretty pink cursive above a beautiful, long-haired woman holding up grapes, with the bricks of the historic Paso Robles Inn surrounding her. 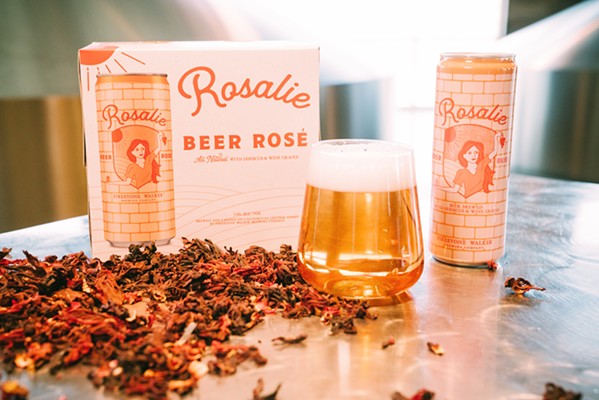 She's at once a beer and a wine. And she solves the age-old restaurant dilemma: Shall I order an IPA or a glass of rosé?

Dear, you can have both, in a stemless wineglass no less. Swirl and sniff the aromatics in the glass before you sip, and keep an open mind.

For my first try of the Rosalie, Firestone Walker Quality Control Manager Amy Crook had me lick some hibiscus flowers in a little cup to see if I could recognize them in the body of the beer-wine. The enigma drink proved lovely, like a light pilsner dating a rosé.

As someone who likes light, fragrant wines like rosés and viognier and also adores beer, I realized I'm among the prime target market. I wondered what my friends and family might think, so I took some six-packs home to run a little experiment.

It was a smashing success: Everyone seemed to be pleasantly surprised at how bright and fresh Rosalie tasted. Some were astounded that a beer could be so elegant, and others were amazed that a sophisticated wine could get along with a tough ol' beer. 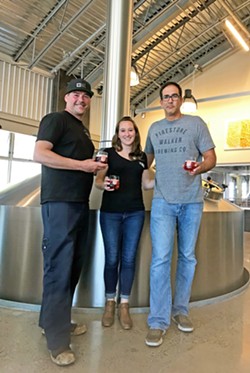 "It's a backyard beer all day," said Head Brewer Dustin Kral, who has been at Firestone for 17 years. "It's just unique. It's different. The acidity is bright, and the color is beautiful."

According to Udsen, rosé is really in right now. And in the beer world, there's the hazy thing going on, and IPA's popularity has skyrocketed. Udsen is hopeful this beer-wine hybrid trend sticks.

Kral recently introduced the Rosalie at the Mammoth Bluesapalooza.

"It was overlooked by a lot of our clientele," he said, describing how sometimes Firestone staff would have to twist people's arms to try something new. "Our customers wanted their IPAs and their standard beer, but once I started telling people exactly what it is—because what this beer needs is the story—not only were they drinking it the rest of the day, they were going back and getting their buddies to come over and taste it and drink it."

Rosalie is only 5 percent alcohol and is made with no extracts, fruit-flavoring, or shortcuts. Plus, it's low in calories.

"I think Firestone, in general, always veered away from making products that we don't want to drink ourselves, just because we think there's a mass appeal to them," said Firestone Walker's Production Director Ari Razi, who has worked 16 years for the brewery. "I think that with this rosé style, there are so many overly sweet products out there that are artificial, where this beer was designed for a more sophisticated palate."

Rosalie is part of Firestone's circle of life—their first beers were fermented in wine barrels, and ever since, they've used oak barrels in their brewing operations. Firestone brewery started small, on the Firestone family vineyard in Los Olivos, and moved to the old SLO Brewing Company building in Paso Robles in 2001. Now it's the fourth largest craft brewery in California and employs hundreds of SLO County residents.

Firestone has a brewery in Venice, California, called The Propagator that serves as an extension of its two other brewing operations in Paso and Buellton. It's a state-of-the-art beer research and development think tank, where Rosalie was conceptualized. Firestone is also the founder of the Terroir Project, a collaborative experiment into beer-wine hybrids.

Once Rosalie was made, Firestone had to purchase new equipment and tackle the challenges of integrating sugary grapes into the pipes and tanks, making the new brew shelf-stable, and preserving the qualities of a well-made beverage. Several test batches were made.

Udsen and Firestone Brewmaster Matt Brynildson tasted the samples along the way, and Udsen said they both learned quite a bit over the experimental span of a year. The wine grape juice was pressed and delivered for cold storage at their brewery in Paso, and the process of brewing a base beer began.

"It was definitely a new challenge," said Crook, who tastes Rosalie every week to monitor the tank. "It opened up a whole new realm of raw ingredient microbiology to watch ... but we learned how to control it, and we haven't had any issues."

In September 2018, Firestone's friends and neighbors at Castoro harvested 100 tons of chardonnay grapes specifically reserved for Rosalie, later followed by another 100 tons of viognier, sauvignon blanc, riesling, and muscat. Brynildson wanted the "crowd-pleasing textures and flavors" of the chardonnay but also wanted the lift of the other aromatic grape varieties.

Udsen said he met Brynildson through Castoro's yearly Whale Rock Music & Arts Festival. Brynildson is a big fan of music, and it was at the festival when Brynildson told Udsen he wanted to make a beer with him.

But Brynildson persisted. Udsen said he could supply enough grape juice for the project, and Brynildson was happy his supplier would be local.

"It was fun for both of us," said Udsen, who personally loves the Rosalie. "It's real light and fresh. You gotta quaffer for sure!" Δ