Director Kelly Reichart (Meek's Cutoff, Wendy and Lucy) helms this story co-written for the screen with Jonathan Raymond based on his novel The Half-Life, about two men—skilled baker Otis "Cookie" Figowitz (John Magaro) and Chinese immigrant King-Lu (Orion Lee)—who form a friendship and successful business partnership in rough-and-tumble 1820 Oregon. However, their business of selling "oily cakes" is contingent on the clandestine milking of wealthy landowner Chief Factor's (Toby Jones) cow—the only one in the region. (122 min.) 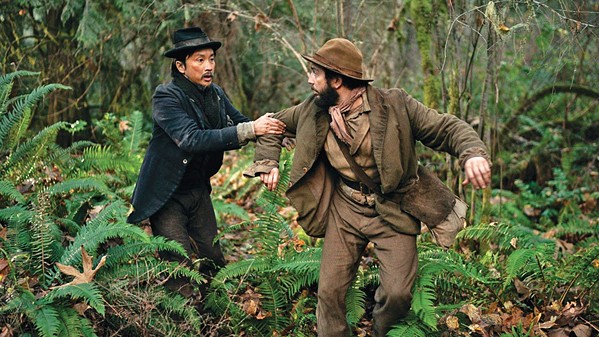 Glen Ostensibly a Western, Reichart's newest film doesn't romanticize the Wild West but instead paints it as a hardscrabble and dangerous life. And rather than being the heroic protagonists of the story, our two leads are quiet, meek, and gentle, trying to eke out a living in dangerous land built on the fur trade. When they meet, Cookie is traveling with a group of loutish trappers making their way to Fort Tillicum. He runs across a naked King-Lu in the forest, on the run for killing a Russian. Cookie helps King-Lu escape, and later they meet again in Fort Tillicum, where they form their partnership. It's an unhurried story about friendship, set up by a William Blake quote that opens the film: "The bird a nest, the spider a web, man friendship." Humans make a home in their friendship with others. Don't expect a fast-paced action film; like most of Reichart's films, First Cow takes its time. Its end is pure poetry, calling back to the film's opening framing device set in present day, when a young woman and her dog, walking by a river, come across a human skull. Quiet and moving, First Cow is an unexpected gem.

Anna I can see why critics have scored this film higher than audiences; the pace is slow and the storyline fairly quiet, but there's a lot of meat on this bone. The two leads are much gentler and more introspective than their rough-and-tumble neighbors, both in search of life outside the fort and bigger and better things. Their means for getting there may be a bit dishonest, but it's easy to justify a bit of stolen milk to make their dreams a reality. King-Lu is more of a risk taker, perhaps pushing the limits of their theft to an unmanageable level. Cookie is gentle and guarded. Watching his interaction with the cow as he milks her shows what a soft and caring person he is. It's not your typical Western where bullets are whizzing through the air and fistfights abound. Action is there, just not a whole lot of it, and it certainly isn't what this story is about.

Glen Reichart paints her male characters in interesting ways. The trappers are brutes, while the more "highborn" characters are downright cruel. It's clear that male ego drives those who are seen as "successful." The side story about Chief Factor and Captain (Scott Shepherd), a visiting friend of Factor's, marks a sharp contrast between men like them and a man like Cookie. Factor is desperate to prove to Captain how elevated his lifestyle is, so he hires Cookie to bake a special cake for Captain's visit. As Cookie and King-Lu arrive with the cake, Factor and Captain are having a casual conversation about punishing men who work beneath them, discussing how the number of lashes must be carefully weighed between correcting bad behavior and rendering the culprit incapable of further service, and how sometimes putting a man to death is better motivation for the remaining workers than mere corrective punishment. It's the ugly side of wealth and power laid bare, and in contrast, Cookie and King-Lu's friendship is so much more authentic than Factor and Captain's. The film keeps returning to its Blake quote about friendship, in this case male friendship that offers nonmonetary riches. It's a sweet, albeit tragic, story and maybe an underdog contender for an Academy Award.

Anna The two men have a goal of making it to San Francisco and opening a hotel and bakery, but without capital their dreams will never come to fruition. Between oily cakes sold to the townsfolk and special requests from Chief Factor, the two are well on their way to realizing their dream. There's something immensely satisfying about watching Factor drool over the baked goods secretly made with his cow's milk—a cow he thinks can barely produce milk at all. The relationship between him and Captain is pretty amusing—the two can't help but try and one-up each other in every aspect. Both are pompous and gross, the opposite of our two main characters. When Cookie and King-Lu are finally found out, they have to flee, and while many men in that situation would fend only for themselves, these two have a bond that keeps them together, for better or worse. It's a really lovely film, and if you have the patience for it, it's well worth a watch. I'd love to see this one up for an Academy Award. Δ