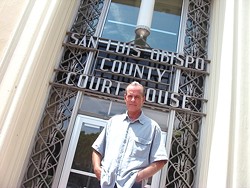 His name is Lawrence Bass, and to say that his career has been unusual would be an understatement. In addition to managing the Moore estate in Idaho, Bass’ resume also includes a nearly 10-year stint as Hugh Hefner’s butler. A quick Google search of Bass turns up several stories confirming his listed occupations.

Bass got 15 minutes of fame when he unsuccessfully sought $180,000 in damages from Moore for sexual harassment in 2002, claiming that he was fired after refusing her sexual advances. The lawsuit resulted in several articles about him, including pieces in People and Star magazines and several stories in The Smoking Gun.

A search of Bass’ name in the Idaho State Judiciary data repository revealed that he has had several court appearances in that state. Bass again took Moore to court four years after his dismissed 2002 lawsuit for sexual harassment. In the more recent case, he also went after Bruce Willis and a list of county and city officials whom he claimed conspired with Moore (he claims Moore had many powerful officials in her pocket) to have him “falsely” arrested twice and deny his civil liberties. Bass sought $17 million in that case, but lost.

Bass says that he’s preparing a federal civil rights case against the county, the root of which can be traced to a DWI he was charged with in December of 2006.

The charge was ultimately dismissed and replaced with a less serious misdemeanor for speeding and one-year probation, according to the District Attorney’s office. Bass said that he was dragged into court, despite having a blood alcohol content under the legal limit.

In September 2007, Bass attempted to obtain a restraining order against one of the deputies who had arrested him. In the requested order, which was denied, Bass said the deputy “falsely arrested me and lied repeatedly in [the police] report, then assaulted, threatened me inside a courtroom, then just outside. Amazingly, he still has a job.”

Bass alleged that the deputy shoved him, drove him out of the courthouse, and that his later attempts to have the deputy disciplined not only fell on deaf ears, but led to further harassment. Sgt. Jim Taylor, whom Bass claimed he had contacted about the assault, said there had been no assault to his knowledge and declined to comment further.

About six months later, Bass was served with a 50-yard restraining order by a former employer. While Bass maintains that the restraining order was based on lies, it was that order that led to his most recent encounter with the law.

When the restraining order was delivered, Bass was arrested on misdemeanor assault charges and for resisting arrest, according to the District Attorney’s office. The charge was for assault with a deadly weapon other than a firearm, specifically a car. In several interviews with New Times, Bass firmly denied assaulting anyone. Sheriff’s Department officials declined to comment on the ongoing case. Bass was released on $25,000 bail and is awaiting a Sept. 3 hearing.

Superior Court Judge Charles Crandall was the presiding judge in the harassment case against Bass and was the judge who ultimately approved the restraining order. About a month after receiving the restraining order, Bass filed a restraining order against Crandall. In the court file, Bass checked boxes indicating that he was the victim of “stalking” and had received a “credible threat of violence” from Crandall.

In conversations and e-mails Bass provided to New Times, he called Crandall and the Sheriff’s Department “dishonorable.” He said there was a conspiracy to deny him his civil rights and that Crandall allowed it to carry on. Bass added that Crandall denied him his ability to protect himself by stripping him of his right to purchase a gun.

Crandall and other judges could not be reached for comment because of the ongoing cases and judicial ethics policies, a courts representative said.

Meanwhile, Bass says he is also preparing a federal civil rights case against the Sheriff’s Department. As of press time Bass had not hired an attorney, but said he had spoken to several and was resolute that more cases would be filed. In the restraining order filed against Crandall, Bass said he would seek “several million dollars.”