Alan Fraser knows a thing or two about love. After all he's listened to and recorded hundreds of couples' love stories out of an airstream in Cambria over the past few years.

The Love Story Project, launched with Alan's wife, Shari, shares space with the couple's gift shop, which features all things heart shaped. So it came as no surprise when Fraser, a wedding photographer, writer, and filmmaker familiar with the film festival circuit, started thinking about bringing love stories to the small seaside hamlet of Cambria in a different, bigger way: through a film festival celebrating movies about romance, happily ever afters, and all the foibles that occur on the quest to find true love.

"It made a lot of sense," Fraser said. "It seemed like a great way to bring people to Cambria and give filmmakers a chance to screen a film."

So from Feb. 8 to 11, the weekend before Valentine's Day, Fraser, in conjunction with partners like the Cambria Center for the Arts, the Pewter Plough Playhouse, and even Hearst Castle, will bring viewers the first ever Cambria Film Festival, featuring classics like Harold and Maude and Going Hollywood alongside contemporary feature-length and short films taking a crack at what it really means to love someone.

As far as Fraser knows, this is the only film festival of its kind to focus just on love stories and romantic comedies. It's a niche, narrow focus, particularly for a genre that is wont to be slammed by film critics.

"We sort of created it with the idea of Cambria being a romantic getaway, a place to come and escape," Fraser said. "So we wanted to work within that notion."

Viewers will be pleased to find that the festival offerings extend beyond the typical "boy meets girl, pursues her relentlessly, and wears her down" narrative. Take for instance filmmaker Shilpa Krishnan's film, There's Always Tomorrow. Set in Abu Dhabi, the premise centers on two former lovers, Anthony and Magda, who reconnect when they run into each other while traveling. But there's a catch.

"As I started to think of stories around two people, a man and woman, I began to wonder what would happen if two ex-lovers meet after a long time," Krishnan, who is based in Singapore, said via email. "Most films when exploring a similar thread, tend to show either one or both being unhappy with their current partner. But I wanted to explore what could happen if both of them were perfectly happy with their current partners? What if there is no leftover negativity between them? Then how will such a chance meeting work out?" 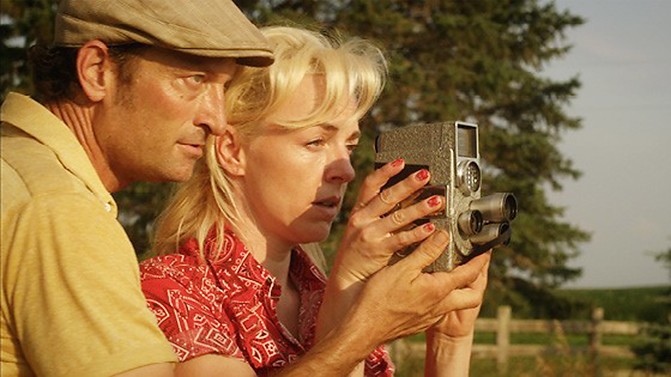 While nobody falls dramatically in or out of love in There's Always Tomorrow, Krishnan's twist takes a conventional narrative and gives it depth and nuance. In a similar fashion, Deborah LaVine's film, Wild Prairie Rose, set in the 1950s, takes a woman, Rose Miller, who was only too happy to leave her ho-hum small hometown and lands her right back there. Instead of just finding romantic love, Rose also reconnects with her mother and community as she tries to make her own movie musical in a town that's lacking a movie theater.

"The film is also about learning to communicate through a variety of barriers, some self-imposed, others the result of external obstacles," LaVine, who is currently in Berlin, said via email. "It [love] can come in all shapes between lovers, parents and children, and/or acts of kindness within communities as a whole. Discovering the true meaning of love comes at any point in life. It changes and transforms as we move through life, but for it to manifest in any significant way, one must be willing to listen with their hearts and have open minds."

And regardless of what your relationship status might be this Feb. 14, who doesn't love a good love story?

"It's a positive thing," Fraser said. "It's something that we all have in common. It's familiar and we all understand it." Δ