Fish and Sips to serve up invasive species this Sept. 20

Christopher Lim is a household goldfish who decided to make a bolt for the sea. His immigrant parents weren’t too keen on outdoorsy adventures like “camping,” and the Bay Area provided an endless array of urban distractions growing up.

It wasn’t until college that Lim first scratched the surface of the natural world. At UC Berkeley, coral reefs and fish captivated the student’s imagination. It was like discovering an alien realm—completely apart from the grease-stained sidewalks and cold high-rises that make up city life. When Lim looked through the glass of his home aquarium, he saw another glittering dimension, and he wanted to see how deep he could dive into it.

“I started to see the interconnections in ecosystems and the beauty of that, but also how we have a part in all of it,” Lim said. “I realized that we, as humans, can make a difference. A lot of times, what we do is negative. But we can change that. I thought, ‘If I can make the world a better place by making just one environment better, that’s what I’m going to do.’”

As executive director of Central Coast Salmon Enhancement, Lim works with a dedicated team to restore the region’s native steelhead population (the fish are a member of the salmon family). His tools are standard for the most part, including educating kids and adults, fundraising, outreach, and ongoing projects to improve habitat. Fish barrier removal is a big one.

“There is a project right behind our office, the Arroyo Grande stream gauge, which we are modifying that to allow fish to pass through,” Lim said. “Right now there’s a high ledge and the fish can’t jump up. Once that’s removed, they can access over 3 miles of habitat.” 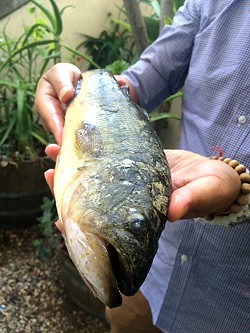 Then there are the not-so-predicable tools that Lim wields in defense of steelhead, which are dwindling in numbers every year due to lack of habitat, drought, pollution, and interference from non-native animals. This Sept. 20, Lim and supporters will raise their forks to the mighty steelhead by eating the fish’s animal enemies. In other words: invasive species.

The thought-provoking dinner, which will unfold with plenty of wine at Wolff Vineyard in San Luis Obispo, will feature bullfrogs (lots and lots of bullfrogs), crayfish (captured, surprisingly, by baiting a line with bits of hot dog), and non-native fish like largemouth bass, which love to slurp up baby steelhead by the dozen.

When allowed to flourish, the dark olive colored fish with speckled, pink-streaked bodies can grow up to 55 pounds and 45 inches in length. Recent snorkel surveys across county creeks, lakes, and pools paint a bleak picture. If the steelhead can grow large enough to escape becoming breakfast for a roving carp, they face a shrinking habitat.

“This area used to be teeming with these fish; they were all over,” Lim said. “That’s all changed due to the choices we’ve made.”

It isn’t often that a group of people would gather together to talk about a fish that isn’t in fact appearing on the menu, but that’s exactly what the Fish & Sips dinner aims to do while raising funds for the nonprofit. Lim will no doubt be chatting with guests about the fish’s unique lifecycle over a few glasses of good Wolff chardonnay.

That story goes something like this: steelhead and rainbow trout have the same genetic makeup. However, while rainbow trout stay in fresh water their whole lives, steelhead are more adventurous, spending the first part of their lives in freshwater streams before migrating to the ocean. Fattened and egg-heavy, they return to their freshwater homes to spawn.

“While salmon will die after spawning, steelhead can repeat this process numerous times,” Lim said. “So perhaps they are even more amazing than their salmon cousins?”

Those may be some fighting words, but I’d have to agree.

Salmon might be supremely tasty, but they sure can’t beat the steelhead when it comes to endurance. The fact that I—a food writer—am even pondering this life cycle means good things for Lim’s cause. He wants to show the community how connected we truly are, and what we are faced with losing.

If steelhead die out, who’s to say we may not lose other beneficial birds, mammals, and insects too? The web of life is interconnected in ways we haven’t yet been able to untangle.

This point will be made deliciously clear as Fish & Sips attendees dig into French-style frog legs, buttered crayfish, and perhaps even a plate of wild boar (in keeping with the invasive theme).

That’s the same thought that first inspired Lim as a youth and got him working with the natural world. It makes sense to pass that on to the next generation.

“We tell kids that the environment starts in their backyard. It starts with the fertilizer you put on your grass; it starts with the water quality. Once it rains, the watershed is all connected, and it’s all going to flow into our creeks unfiltered.”

With the ongoing drought, steelhead are having an even harder time making their heroic journeys out of streams and into the ocean. Now, more than ever, diverted gray water and rainwater can help to raise water levels for the fish that quietly swim near our businesses, schools, and homes.

“These fish are survivors,” Lim said. “But they can still use our help.”

Hayley Thomas wants to catch a bullfrog with her bare hands at hthomas@newtimesslo.com.