Prepare yourselves, live music nuts, because there's a tsunami of shows descending on SLO County this week. Strap in, pull out your calendar, and let's take this one day at a time. 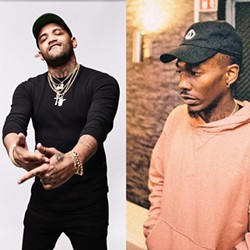 Later that night in SLO's Frog and Peach, check out Petaluma rock/soul band The Highway Poets (10 p.m.; 21-and-older; free). Listing everyone from the Rolling Stones and Nirvana to the Black Keys and Otis Redding, they strive for a performance mash-up of contemporary and classic styles. They recently released the new full-length album Chasing Youth.

Get your Led Zeppelin fix when tribute act Led Zepagain plays The Siren (7:30 p.m.; 21-and-older; $20 presale at ticketfly.com or $25 at the door). These guys have been paying homage to Zep for 15 years, and back in 2004, Jimmy Page caught their act, asked to meet the band, posed for photos, and remarked, "It's amazing how much you sound like us. You must have grown up on this because you were inside the music, and you paid attention to detail in your presentation. I can tell you guys really love the music!" This is as close as you're going to get to seeing Led Zeppelin live.

You're going to need clones, a Star Trek transporter, or a time machine to get to everything happening this Saturday. If you want to start early, check out award-winning singer-songwriter and rocker Kristen Black and her band at The Siren (3 p.m.; free). "We will have some new songs on tap as well!" Black said.

Later that night, New Wave ska act The English Beat plays Tooth & Nail Winery (6 p.m.; all ages; $22 presale at ticketfly.com or $25 at the door) with opening act The Trouvillians. Are you excited about this one? If you are, I hope you already bought tickets. It's sold out. 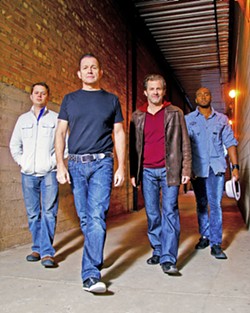 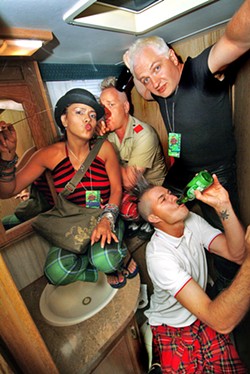 Alligator Records recording artist and ripping rocking R&B act Tommy Castro and the Painkillers headline the SLO Blues Society show at the SLO Vets Hall (8 p.m.; 21-and-older; $25 at Boo Boo Records, Cheap Thrills, and Paradise Records, or at the door). If you like high-energy blues and roadhouse rock, Castro delivers the goods. His newest album, Stompin' Ground, is filled with his signature blistering guitar licks, fiery melodies, and gritty vocals. This lean, mean quartet is a powerhouse! Orphan Jon and the Abandoned opens the show.

If you're in the mood for a trip back to the New Wave '80s, Arroyo Grande's The Clark Center has a great double bill featuring The Motels and Bow Wow Wow with its original singer, the amazing Annabella (8 p.m.; all ages; $45 to $55 at (805) 489-9444 or clarkcenter.org)! Martha Davis and The Motels are known for classic hits such as "Only the Lonely," "Suddenly Last Summer," "Total Control," "Mission of Mercy," "Shame," and "Danger." Bow Wow Wow, founded by lead singer Annabella Lwin with help from U.K. music impresario Malcolm McLaren, enjoyed the mega hit "I Want Candy," as well as "Go Wild in the Country" and "Sexy Eiffel Tower."

Get your hot jazz fix when Lodi's Cell Block 7 Jazz Band and The Cabrillo High School Jazz Band play the next Basin Street Regulars show at the Pismo Vets Hall (11 a.m. jam; concert at 1 p.m.; all ages; $10 at the door). This is a load of fun for dancing or listening.

The Siren, with the help of Numbskull and Good Medicine, hosts amazing Portland-based gospel, soul, and R&B singer Liz Vice (7 p.m.; 21-and-older; $15 presale at ticketfly.com or $20 at the door). "I didn't think I was going to live past 20 years old," Vice, who suffered from a kidney-destroying autoimmune disease, recounts in press materials. "Instead of praying that I would be healed, I was just so tired that I would pray for death every day, but every day I woke up, I decided to live that day to the fullest." You can hear that can-do spirit in her stunning music.

Cal Poly Arts has some laid-back Hawaiian sounds coming your way when Keola Beamer and Henry Kapono play the Spanos Theatre on the Cal Poly campus (7 p.m.; all ages; $48 general admission and $38.40 for students at (805) 756-4849 or calpolyarts.org). Both became stars in the '70s. Beamer is an amazing slack key guitarist, and Kapono (part of Cecilio & Kapono) is an award-winning singer-songwriter. The show includes special guest artist hula master Moanalani Beamer. 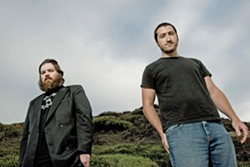 San Diego-based indie rock act Pinback, made up primarily of singer-songwriters-multi-instrumentalists "Zach" Armistead Burwell Smith IV and Rob Crow, play a Numbskull and Good Medicine Presents show at the SLO Guild Hall (7:30 p.m.; all ages; $18 presale at ticketfly.com or $20 at the door). What started as a side project in 1998 quickly grew into Zach and Rob's main thing, and over the last two decades, they've continued to create beautiful melodies with deceptively complex layered sounds with arresting vocals.