The Gallery at Marina Square in Morro Bay (601 Embarcadero, suite 10; call (805) 772-1068 for more info) hosts the photography exhibit Evening Skies, a collection of images showcasing breaking dawns and closing days on the Central Coast. Photos by Beth Sargent, Karen Peterson, Terry Garvin, Jack McNeal, and Greg Siragusa will be on display through Dec. 29.

It only takes a fraction of a second to capture a photo, but a great image will last forever—a perfect moment frozen in time. Through Dec. 29, you can see five master photographers' work at the Gallery at Marina Square in Morro Bay in a show called Evening Skies. 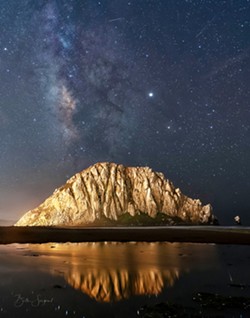 "Photographers Beth Sargent, Karen Peterson, Terry Garvin, Jack McNeal, and Greg Siragusa bring their talents together in depicting the evening skies of our seaside beaches and sanctuaries on our Central Coast," according to the gallery. "Sunrises and sunsets, all the amazing colors of light in the skies of these beautiful places that make our Central Coast a paradise, will be depicted in these photographers' works of art."

Sargent "loves the the speed, accuracy, and image quality" of Sony mirrorless cameras and lenses and says she processes her work in "what I call my digital toolbox, which is Adobe Photoshop and Lightroom along with other digital develop programs such as Topaz, Nik, On 1, Luminar, and Aurora software.

"Every photo tells a story of a moment captured in time," she said, "and I love to be able to share that moment with others. I have two quotes that hopefully convey my message in my work: 'Let the beauty of what you love be what you do'—Rumi. And, 'It may be my vision, but it is your emotion that gives my photography meaning.'"

When asked how she manages to capture the scene, Peterson tells people, "Part of it is being in the right place at the right time. That involves studying the subject/area and thinking about the composition as I'm taking the photo. Of course there are occasionally the lucky shots that happen when you're not expecting them. Cellphone cameras are great for capturing the moment, and there are so many programs available for post-processing, you can end up with a wonderful image," she said.

"I've been told the best camera is the one you have with you. I've often been out photographing with other local photographers—members of Central Coast Photographic Society and San Luis Obispo Camera Club—and everyone's photos are unique, no two images look the same even though we were all there at the same time," Peterson said.

Garvin explains, "I shoot mostly RAW format, which comes into the computer with all the data intact but with a very flat and dull look. I need to make adjustments to the photo to make it presentable. My goal is to end up with a photograph that is true to the emotions I had of the scene. I am not a documentary-style photographer."

He says the important thing is "being there," because "you can't get the photo if you are not there," and "don't sit around missing opportunities because you don't have the camera or lens you think you need." 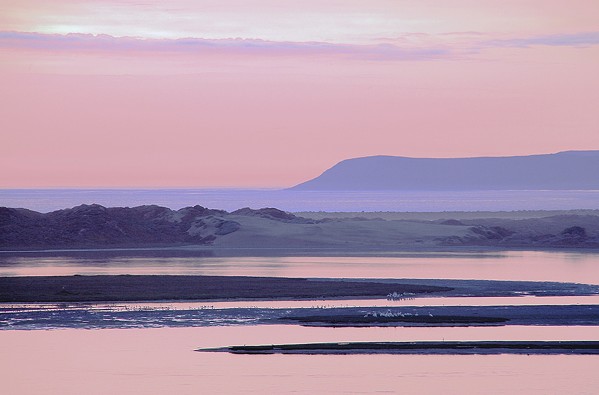 McNeal says he's trying to "capture mood, preferring to attain a calm outlook" in his images. A real coast lover, he says, "I rarely get far enough from the sea that I can't get one foot in the water." And when he explains how he captures his photos, he says, "I have my favorite places and I just go to them with an open mind. I am particularly drawn to the twilight phase of the evening. Once the sun has set, I wait until the sky develops interesting colors. I generally will keep shooting until the colors begin to fade.

"I'm almost always shooting with a tripod so I can make subtle changes to the composition," McNeal continued.

He thinks cellphone cameras have increased people's appreciation of photography. 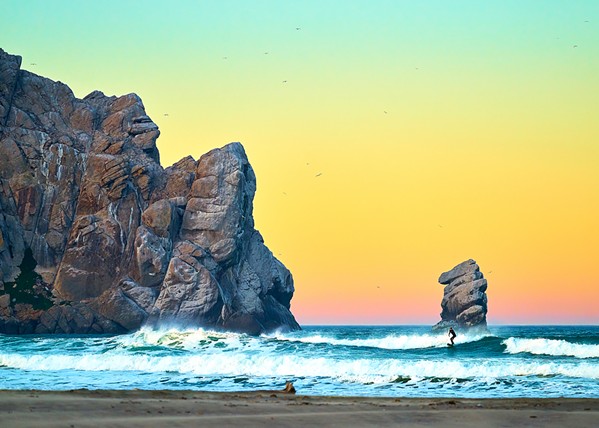 Siragusa is co-owner of the Gallery at Marina Square, and he believes "the world is a beautiful place, and I'd love to capture as much of it as possible! The way the human eye sees light is very different from how a camera captures and represents that same scene. Whether an emulsion on film or a photo site on a digital sensor, data has to be transposed from one form to another.

"My goal is to represent the emotional feeling of experiencing the place that I am photographing. That means that yes, I may increase saturation or contrast, boost shadows, or do other tonal work to ensure the photo feels emotionally correct—I admit my goal is to be more than a visual stenographer," he continued. "But to be clear, I don't like to change the content of my photos; I simply hope to create a vibe that reminds the viewer of the experience of being there.

"There's an old saying, attributed to Lefty Gomez, a 1930s era Hall of Fame baseball player, 'I'd rather be lucky than good,'" Siragusa added. "It's important to be good, to have skill, to be prepared, to be available. Lefty knew this. But none of us can control the sky, the clouds, the birds, or the waves. Sometimes, we're ready, but the universe won't cooperate.

"At the same time, the world can show us something amazing, but, oops, we aren't ready. It's when everything lines up perfectly that I'm lucky to be able to click the shutter." Δ