Take your oversexed image of the “feisty flamenco woman” (the one with the red and black polka dot dress and clicking castanets) and swiftly sweep her into the dustbin. Jamie “La Gitane” is here to show you what all the mad foot stomping, wild chanting, and impassioned guitar thrumming is truly about.

She’s here. She’s Gypsy. Get used to it.

“My family came from France to the U.S. in the late 18th century and settled in Minnesota. We are of Gypsy and Jewish heritage, and we kept quiet about this, especially during the ’40s, with WWII,” said Jamie, whose stage name means “the Gypsy” in French. “I am the first one in my family to openly declare who we are and where we come from. I find relief through flamenco, and I feel that keeping the tradition alive is the best way to honor my people.” 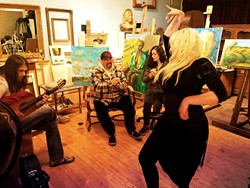 According to Wikipedia, there are currently around 1 million gypsy descendants—officially called “Roma,” “Romano,” or “Romani”—living in the United States. The dancer performs what she calls “Flamenco Puro,” the frenetic, passionate movements that her ancestors created in crumbling ghettos across Europe.

“Spaniards saw the gypsies performing and they took those dances to the opera houses,” Jamie said. Since then, the dance has been further gussied up and caricatured around the world. Hollywood hasn’t been a big help.

“This art form was created during the Spanish Inquisition when the Gypsies, Jews, and Moors were being persecuted. They fled to the caves in the hills of Sacromonte, ‘Sacred Mountain,’ in Granada, Spain, to seek refuge,” Jamie added. “Together, these three cultures melded and lamented to one another through their unique expression of song, music, and dance. It is passionate and evocative and affects people whether they are familiar with flamenco or not.”

According to Jamie, these marginalized people needed an artistic outlet—something to do with their bodies so their souls wouldn’t wither under the weight of ongoing oppression. What could be more satisfying than a swift foot stamp, a defiant swish of the hips, and a shriek to the sky? Like the first mosh pits of the 1970s, flamenco provided both therapy and cultural camaraderie for the disenfranchised.

“That is what flamenco is. You are facing injustice and fighting and crying out against hardship,” Jamie said. “It is the most therapeutic outlet of our soul’s most raw and expressive emotions.”

Flamenco is made up of four elements: “cante,” meaning voice; “baile,” or dance; “toque,” or guitar; and everyone’s favorite, “jaleo,” which roughly translates to “hell raising.” As you may already know, the latter involves the hand clapping, foot stomping, and shouts of excitement that are known to transform flamenco shows into soul-stirring riots.

“I can’t think of a better, more intimate level to reach people,” the dancer added.

Flamenco is also undeniably sexy, but not in an obvious “Sofia Vergara” way. Jamie agreed that the dance is truly alluring because it is powerful. Like the act of lovemaking or mourning, it is all about pure abandon. The dancer has even seen tears stream down audience members’ faces after a particularly poignant performance.

“One woman told me, ‘You really stomped the head of that serpent,’” Jamie said. “I know that the music touched her on a deeper level and allowed her to focus on her own struggle. Authentic flamenco is always about overcoming.”

The performer relocated from Los Angeles to Pismo Beach a little more than a year ago and said she was instantly attracted to the energy and history resonating from the land.

“There is a connection to flamenco in the earth of this city that harkens back to the early 1800s; you can hear it in the early mission music,” Jamie said. “When I came to the Central Coast, I knew there was something different in the air and in the spirit in this place. It was meant to have flamenco.”