Genius and dysfunction seem to intertwine in Fleetwood Mac, arguably one of the most successful bands in rock history. They've sold more than 100 million records including 40 million copies of Rumours (1977), the eighth-highest-selling album of all time, but the band was just as famous for the duel relationship flameouts of John and Christine McVie, and Lindsey Buckingham and Stevie Nicks. 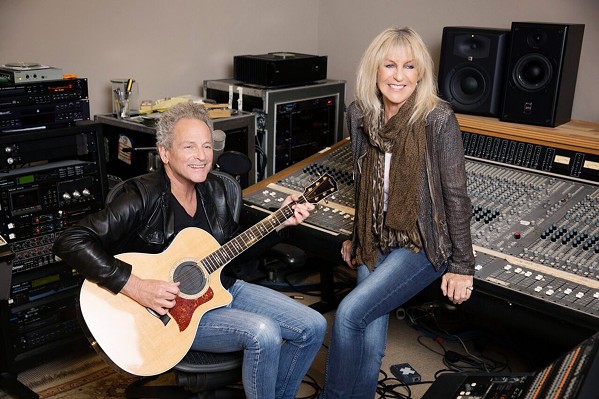 Buckingham stayed with Fleetwood Mac through the years, though he enjoyed a successful solo career at the same time. The entire group disbanded from 1995 to 1997. Christine disappeared into the British countryside in 1998 and didn't return to the band until 2014. It now includes founding members John McVie, Mick Fleetwood, Christine McVie, Buckingham, and Nicks, who reformed in 2014 to embark on their On with the Show tour.

To prepare for that tour, Buckingham invited Christine into Studio D of LA's Village Recording Studio, where they recorded Tusk together, to see if they could re-spark their chemistry.

"It wasn't that I was particularly skeptical," Buckingham explained recently during a phone interview, "it's just that we went into the sessions without any agenda. She said she wanted to reconnect with her writing process, and Mick and I thought it would be good to get together early on. She had been sending me bits and pieces of songs she'd been working on, and I had a great feeling about them."

Buckingham, known as a studio wizard and master at fleshing out other people's material, began to massage the songs as well as share songs of his own he'd been working on.

"The other thing is Christine had taken leave of the band for 15 years. It's one thing to correspond across the Atlantic Ocean with her in her particular bubble and me in mine, and it was another to get together in the same room and see if the chemistry was still there, the common bond and vocabulary. A lot of times, once you let that much time go, it can be hard to reclaim that former experience."

Perhaps surprisingly to both, not only did their creative chemistry remain, it seemed to have grown stronger. Their songs clicked together, the voices blended seamlessly, and the songs the session generated were amazing.

"The light bulb went off and we thought, 'Holy crap,'" said Buckingham, "and suddenly we started to think these songs we were working on could be a duet album. It started to take on a life of its own, and we started becoming protective of the songs."

What might have become a new Fleetwood Mac album instead became the eponymously named Lindsey Buckingham/Christine McVie album, which features Fleetwood founders Mick on drums and John on bass. The pair has already completed a summer U.S. tour, and next week they'll embark on another leg that'll cross the country, with a stop at Vina Robles Amphitheatre on Sunday, Oct. 15 (8 p.m.; all ages; $60 to $100 at vinaroblesamphitheatre.com).

"The album is a departure from the Fleetwood Mac thing and yet it's still completely familiar," Buckingham continued. "We were able to find that spot. What the songs mean to me now is that we were able to navigate a willy-nilly process that happened in fits and starts and still turn it into something cohesive. When we finished we thought, what took us so long [to worked together again]?"

Buckingham just turned 68, and yet he seems as creatively driven as he ever has. McVie is proving there's life after a decade and a half of reclusiveness. They both still have "it," whatever that elusive "it" is. Critical acclaim for their new album is rolling in, but with all he's achieved over his nearly 50-year career, do the accolades mean anything anymore?

"What you try to do is the best job you can," Buckingham said thoughtfully. "We made the album we wanted to make together, an album we wanted to tour with. After you've been in the business awhile, you begin to see that people constantly long for reinforcement, but if you look at every review, it can be a little self-defeating because if you're going to buy into the good reviews, in theory you have to buy into the bad. For me, I've tried not to lose perspective on what I do, my craft as a songwriter. I'm still doing this for a set of reasons and I still have respect for what I do.

"The business model has always been to find the thing people want and to keep giving it to them, but that's an idea we rejected after Rumours when we followed up with Tusk. We rejected the idea of chasing a brand, rejected the corporate formula, and rejected commercialism. I think when that happened, I defined myself for the first time as someone who cared about art and aspired to be an artist, and I've tried over the years to continue to transcend stereotypes."

Also as Vina Robles this week is the return of country star Lee Brice on Saturday, Oct. 7 (8 p.m.; all ages; $45 to $55 at vinaroblesamphitheatre.com), with opening act Lewis Brice. Last year he sold out the venue, so if you want to go, get tickets quick. Years ago I saw Jimmie Dale Gilmore in Sweet Springs Saloon, and it was a minor miracle. The Texas-based singer was never much for touring, especially to California, and to see him in such a small club was crazy.

Now something even crazier is happening! Gilmore is touring with Joe Ely and Butch Hancock as The Flatlanders, which the trio first formed in 1972, and if I'm not mistaken, this is their first time together in California. They're playing this Thursday, Oct. 5, at the Fremont Theater (7 p.m.; all ages; $38.25 and $48.25 at Boo Boo's and vallitix.com).

These three are basically responsible for the creation of alt-country music. Each on his own is a legend of Texas grassroots country music, and as a trio their chemistry and synergy is undeniable! The only reason we're seeing them is they've come west to play Hardly Strictly Bluegrass in San Francisco. Thank your lucky stars!

Just how elusive are The Flatlanders? Their initial 1972 recording session was never officially released, though that same year they played the Kerrville Folk Festival where they were named one of the winners of the New Folk Singer/Songwriter competition. They played together through 1973 before disbanding, but by then they had a handful of cult fans. When they found success as solo performers, rumors about their early collaboration started floating, and in 1991, Rounder Records released the 1972 sessions as More a Legend Than a Band.

In 1998, they contributed songs to The Horse Whisperer soundtrack, and in 2002, they finally released a follow-up studio album, Now Again. Two more albums followed—Wheels of Fortune in 2004 and Hills and Valleys in 2009—and in 2012, on the 40th anniversary of their initial recording sessions, The Odessa Tapes were released captured from the original tapes, which had been lost for 40 years!

The Flatlanders were voted into the Austin Music Awards Hall of Fame in March 2016. For reasons I can't fathom, ticket sales are soft on this Otter Productions Inc. show. These guys are legends! Forget what you were planning to do tonight and head down to the Fremont Theater. You may never get the chance to see these guys again.

Numbskull and Good Medicine Presents have a cool show cooked up for you at Tooth & Nail Winery this Friday, Oct. 6, when folk-pop act Kuinka (coo-WINK-uh) presents their singular sound (5:30 p.m.; all ages; free), which has been described as "an electronic jolt into modern folk and Americana, waltzing along the grooved edges of dream-pop, synth-pop, and Brooklyn's mid-aughts guitar-rock revival," according to Vanyaland.

Formed by brothers Zach and Nathan Hamer, along with Miranda Zickler and Jillian Walker, this string band moves beyond Americana into uncharted territory.

"We've spent our time as a band in pursuit of a unique sound that captures our energy and essence," Zickler said in press materials. "We'd love for our music to be a soundtrack to adventure. Our biggest goal as a collective is to fight the trend of apathy—to infuse everything we do with a sense of joy, and to affect positive change in the world to the best of our ability."

You might have heard Joey Racano's name in conjunction with his local activism. The liberal watchdog is a frequent letter and commentary writer focused on both local and national concerns. He's also a musician, and this week he's releasing a new album, Midnight Medicine.

The CD release party will be held at Last Stage West on Highway 41, on Saturday, Oct. 7 (6 to 9 p.m.; all ages; free). Racano will accompany himself on acoustic guitar and he expects to have a couple friends who appear on the album sit in. Racano will also sit in with the weekly jam band session at Merrimaker in Baywood on Wednesday, Oct. 11 (7 to 11 p.m.; 21-and-older; free). Racano will join the band around 10 p.m.

Racano recorded the album with a drum track at his own Lupinesong Studio in Los Osos, and on it he plays lead and rhythm guitars, bass, and piano, and he sings lead and backing vocals. He had backing vocals help by Adam and Heather Flood, with Andrew Ingraffia and Laura Foxx on saxophones, and Jimmy Mancini and Jeff Pienack on harmonica.

The opening track, "In the Middle of the Night," demonstrates Racano's talking blues style that drifts into hip-hop-style rap.

"Medicine Wheel," which lampoon's America's pharmaceutical addiction, displays Racano's gift for rhyme: "No man is made of stone or lives by bread alone/ We stand here on our own made up of flesh and bone/ Nobody is an island, no man is made of steel/ We're all drugged into silence living here on the medicine wheel// But you're a lucky fella, tucked under big brother's umbrella/ Anytime that you're feeling blue, big pharma's got the drug for you."

Check him out! Put a face to that letter-writing name! 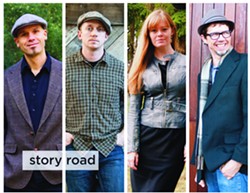 The college-centric Shabang music and art festival happens this Saturday, Oct. 7, at Laguna Lake Park (2 to 9 p.m.; all ages; $7). Organizers are expecting upwards of 3,500 attendees to see The Memories, Ragged Jubilee, Klink, and more. 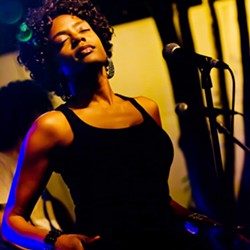 Also, mark your calendar for Niki J Crawford with Sure Fire Soul Ensemble, which plays next Thursday, Oct. 12, at The Siren in Morro Bay (7:30 p.m.; 21-and-older; $12 presale at Boo Boo's and ticketfly.com or $14 at the door). Crawford, you may recall, was the former Orgone front woman. Δ