An unknowing musician is caught in the Mardi Gras fray

To get an idea of how busy police were during this yearâ€™s Mardi Gras in San Luis Obispo, one might look to Eric Cletsoway, the 46-year-old life-long resident of San Luis Obispo. On Saturday, February 25, while walking home from his parentsâ€™ house at 6:50 p.m. to avoid Mardi Gras chaos, Cletsoway was tackled by two officers and hauled off to jail â€” for brandishing a recorder and trespassing over the railroad tracks, becoming the first of 14 arrestees that night. 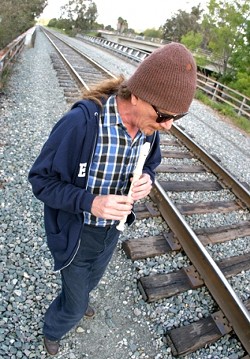 #
Â Cletsoway says the police broke one of his ribs, but the injury most visible is a purple bruise on his inner arm the size of a hockey puck. When police saw him walking over the railroad bridge that crosses Highway 101 near California Boulevard, they apparently thought Cletsowayâ€™s white soprano recorder, which he was playing at the time, might be a weapon. There is a â€œno trespassingâ€? sign posted before the bridge, but the bridge is commonly used by pedestrians to get across 101.

Â Cletsoway walked over the bridge, working out a melody on his recorder as he stepped from tie to tie. When he was about to step from the tracks down a short embankment to the end of Johnson Street, less than a quarter-mile from his home, he heard some yelling muffled by the loud cacophony of Highway 101. â€œI thought it was some rednecks coming to beat me up,â€? he says. â€œI thought they were going to jump me.â€? He kept walking but was quickly tackled from behind. â€œI ended up on the ground and thatâ€™s when the shock set in.â€?

Â Two officers took him down, accusing him of resisting arrest. It was then that Cletsoway learned the officers thought his small white recorder was a weapon. Still the claim seems a bit far-fetched. â€œIf I had my alto recorder maybe,â€? he says, â€œbut Iâ€™d never hit anyone with that â€” itâ€™s worth $200.â€?

Â Soon there were a dozen to 20 cops on the scene, says Cletsoway. The sober recorder player wasnâ€™t cited for being drunk in public, or resisting arrest. He was cited for violating penal code 3691 â€” trespassing. Nonetheless, Jon Law took him out to Kansas Avenue, where he was put in a cell and not released until 2:30 a.m.Â  Itâ€™s not clear if trespassing is normally a detainable offense, and calls to the San Luis Obispo Police Department were unanswered as of press time.

Â â€œIt was quite intense, I must say. It was just the result of over- zealous constabulary and there being too many of them,â€? he says. â€œI should have gone the long way around. In retrospect, I would have. I didnâ€™t think that at seven oâ€™clock at night is when parties were going to get out of hand.â€? âˆ†