The Art Center embraces both the psychedelic and Victorian

What happens when you take a parrot tulip as your subject, and apply an unlikely combination of Victorian and psychedelic aesthetics with Frankensteinian ruthlessness and curiosity? If you’re Santa Barbara-based photographer and graphic artist Margaret Morrison you end up with botanical print constructions titled Nouveau Victorian. If you’re the rest of us, well, you’re probably not creative enough to consider plucking apart dead and dying flowers for art. Morrison is though, which is why she has an exhibit in the First Gallery at the SLO Art Center through Sept. 24.

Like most proprietors of creativity, Morrison was interested in art as a child. But it was while studying art at Humboldt State during the mid-’70s that she discovered her niche as a still-life photographer. Her father had always held conservationist ideals, and Morrison was learning to flex her creative muscles surrounded by majestic redwoods, making it natural that nature would creep its way into her photographs.

“I grew up with nature,” she explained. “I think that has a lot to do with why I focused on natural forms in my artwork.”

After college, Morrison traveled extensively, living in Manhattan and Tokyo, and allowed her cosmopolitan experiences to color and shape the direction of her work. In 1990 she moved to Santa Barbara, where she currently resides. The Southern Californian paradise has been no less influential upon her work than her two metropolitan former homes.

In particular, Santa Barbara’s Mediterranean climate has placed an astonishingly diverse assortment of plant life at her fingertips, from cacti and succulents to eucalyptus trees to orchids.

“We’ve got everything, which sort of resulted in my taking parrot tulips and exploring death and decay,” Morrison explained. “I started letting some of my parrot tulips droop and age in their vases. I was seeing a lot of possibilities about how this form was influenced by time. It created a fluid, really interesting sort of statement on life and the creative process that really has grown out of my experience in Santa Barbara and my changing ideas about how plant life changes and adapts.”

While living in Santa Barbara, the mistress of decaying plant forms made a decision that would play an integral role in shaping her future work; she purchased a Macintosh computer and enrolled in a PhotoShop course. Morrison began to shape her newer projects around the tools and possibilities that her graphic design knowledge presented.

Most of Morrison’s digital photo montages—named for the hybrid techniques she employs to create them—begin with a seemingly simple flower, like the tulip orchid or the matilija poppy. Sometimes she photographs the plant life, whole or desecrated; sometimes she instead scans the subject. The latter- day Frankenstein then dissects the photos themselves, constructing an entire different form from the various pieces in PhotoShop. 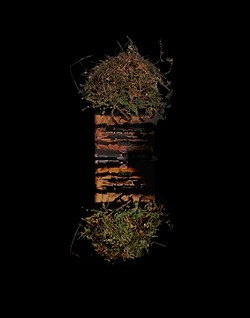 “I use the tools in PhotoShop to adjust the color and do various types of tweaking. I can multiply parts of the image and also make multiple parts of the same petal. I’m kind of playing God, in a way,” acknowledged Morrison without guilt. “The artist is actually creating this separate world apart from the real world.”

As a creator/ artist Morrison usually works in a studio environment where everything, including the lighting, is controlled and utilizes equipment that captures every infinitesimal detail of her subject.

The background color for the images, Morrison is quick to point out, is not actually white. Instead, she utilizes a pale yellow color intended to mimic rag paper utilized in Victorian prints. Her interest in these botanical prints, and her desire to modernize this aesthetic also factor largely into her work. It may be difficult to reconcile the repetitious and muted floral patterns so popular in Victorian homes with the acid-bright, heavily textured petals that wind around her canvasses with what Morrison happily describes as “animalistic energy.”

In another series, focusing on the Southern California native matilija poppy, Morrison’s creative journey began when she encountered a box full of the remains of one such plant while cleaning her yard.

“The sun hit the boxes in such a way that it reminded me of a still life,” she explained. So, she began shooting. Not the flower itself, but the shreds and remains from the flower. The flowers may be beautiful, in blossom and whole, but Morrison appreciates the life lessons and insights that she gleans from the plants, and the fresh, unmolested flower seems to afford less food for cognitive wanderings.

Nouveau Victorian represents the last year-and-a-half of Morrison’s laboratory-like constructions. In one exceptional case, she managed to assemble her hybrid floral beast in a single day. Another piece required one year to complete. Each is a puzzle that can only be resolved by patiently moving through Morrison’s elaborate process of construction. When the birthing process is complete, Morrison insists that she just knows.

As a nod to her era of influence—the Victorian period—Morrison paints her frames black and her images are displayed salon style, a mode embraced by society of that period.

And that, art lovers and connoisseurs, is what happens when flowers, Frankenstein, and photography meld under the guidance of a creative hand.

Nouveau Victorian: Botanical Print Constructions by Margaret Morrison will be on display at the Art Center through Sept. 24. An artist reception and Q & A will be held Sept. 5 at 7 p.m. For more information visit www.sloartcenter.org or call 543-8562.