Aquarius will be on display at the SLO Museum of
Art through April 15. Visit sloma.org
for more info.

He knew he had to paint that face.

It wasn't one particular face that Atascadero-based artist John Barnard wanted to paint, but an amalgam of a certain kind of dude. 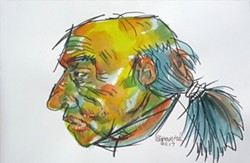 The watercolor painting features an ornery looking profile of an older gentleman with a ponytail, outlined in thick black and filled in with bright splashes of yellow, blue, green, and orange. The piece, Grizzled Hippie, is currently on display as part of the annual Aquarius art show at the SLO Museum of Art, which is put on by the Central Coast Watercolor Society.

"I've seen men with hair like this and I think it's ridiculous," the 94-year-old Barnard said. "These men think it makes them look young, but it doesn't."

The look of Grizzled Hippie caught the eye of Aquarius show juror and Oakland artist Michael Reardon. He said the use of color, in particular, was fantastic.

"I wanted to meet the guy who painted that. It has a lot of feeling," Reardon said. "That style, kind of very expressive use of lines and colors was really big in the '60s and '70s."

Barnard has been part of the SLOMA art scene since the 1970s when it was an art association of dedicated painters and community activists. Some of his watercolor pieces are still a part of the museum's permanent collection.

In 1973, his family moved to Atascadero after he worked in the electrical industry in Venezuela, despite studying art at the Chouinard Art Institute and the University of Georgia.

Today, Barnard still paints nearly every day in his room at a retirement home in Atascadero. He works mostly in watercolor, preferring to stick to realism and sometimes abstract landscapes. His ideas often come to him in dreams. Crayola oil pastels, paintbrushes, and half completed paintings crowd the space between his bed and a small table. On his wall hangs a painting of his wife, Barbara, in her younger days, wearing a blue dress and sporting red nails.

Barnard chimed in, adding, "If I don't paint, I don't feel normal. I just enjoy it. I think everyone should do something they enjoy. Otherwise it's going to mess up your whole life." 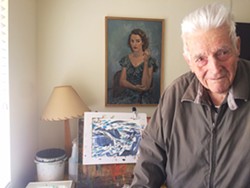 Reardon hopes the show will give locals a chance to take in the watercolor works of Barnard and others.

"There's something about its luminosity and its ability to capture light," Reardon said of watercolors. "Watercolor can be done in different ways. It can be a really effective media."

While Barnard paints mostly for himself, he's happy if others take something away from his work as well.

"I just hope they get a little pleasure out of it," Barnard said. "For me, art is just something that I have to do." Δ

Arts Editor Ryah Cooley is a Sagittarius at rcooley@newtimesslo.com.