David Kreitzer<0x2019>s exhibit, WaterWorks, features the artist<0x2019>s collection of fluid and sparkling oil and watercolor paintings. The show is on display at Studios on the Park in Paso Robles through Aug. 31. Visit studiosonthepark.org for more information. To see more of Kreitzer<0x2019>s art, visit kreitzerart.com.

Los Osos artist David Kreitzer always likes a good challenge. The way he sees it, having something to strive for in his work prevents his art from feeling mass-produced. Time and time again, when the painter picks up his brush, he comes back to one particular subject matter: water.

"I've always loved painting water because it's such a great challenge," Kreitzer said. "It's the one moving thing in nature. It's almost un-paintable." 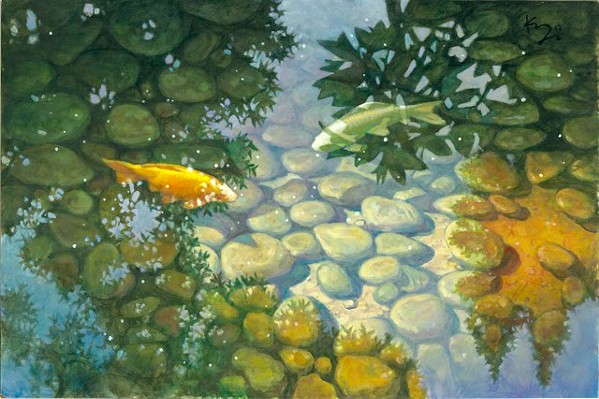 To celebrate his 50th year—his golden anniversary—of painting professionally, a selection of Kreitzer's aqua inspired watercolor and oil paintings are currently on display as the WaterWorks exhibit at Studios on the Park in Paso Robles.

Growing up, Kreitzer wanted to become a cartoonist. Then later, when Kreitzer was fresh out of art school, he pondered becoming a teacher rather than pursuing art, but instead he took a risk.

"I decided to go for broke and just be a painter," Kreitzer said. "I didn't want to go the rest of my life thinking I should have done it."

He got some of his paintings into Maxwell Galleries in San Francisco right away and soon after his work started selling out. About 40 years ago, he relocated from the Bay Area to the Central Coast so he could be right in between the art hotspots of LA and San Francisco. The rest is history.

The contemporary American realist painter's whimsical and soft touch lends itself both to everyday and fantastical scenes on the canvas. Kreitzer often spends time at the Paso Robles Inn's koi ponds, photographing the fish so he can paint them later in pieces like Two Head-On Koi, which shows a few of the inn's newer koi fish that are steadily growing in size. He also paints other local spots, like the water at Atascadero Lake Park or the estuary in Los Osos.

"They're buying a view that will never be fenced off," Kreitzer said of his paintings. "That's your view into another reality." 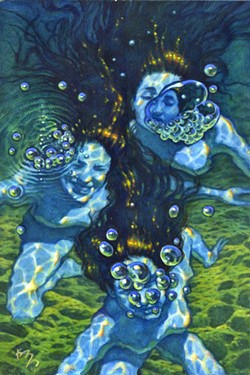 For other pieces, Kreitzer finds his inspiration a little farther from home. After being commissioned to do posters for the Seattle Opera's production of the German opera, The Ring of The Niberlungs, Kreitzer was inspired to paint Blowing Bubbles Rhinemaidens, which depicts fierce yet beautiful mermaid-like creatures, also known as rhinemaidens, who guard the magic gold in the opera's story from dwarves who live under the earth's surface.

"It's just classic sort of world history drama," Kreitzer said. "It's wonderful stuff. It's a lot of symbolism on the surface. It's just fun and colorful and crazy like Lord of the Rings or any other fairy tale or saga."

Above all, Kreitzer hopes that people take away a moment of beauty and inner calm from looking at his work.

"I don't believe art is a tool for societal change," he said. "I think art has the purpose of healing, all of the arts are about healing. I've always tried to do paintings that have a meditative calm about them. Looking at the waves at the ocean, a calm lake, a rushing river; all of these things contribute to mental health and peace." Δ