Levity Academy in SLO offers classes for kids and
adults on aerial apparatuses like silks, lyra, trapeze,
rope, and more. For a class schedule and pricing, visit
levityacademy.com.

There's an overwhelming sense of calm as you walk into the industrial space at 207 Suburban Road in San Luis Obispo.

Sunlight peeks through the partially opened garage door, shining onto pristine white walls and sparkling mirrors. Vibrant purple and teal silks hang from the ceiling and carefully placed greenery brings the outdoors inside. It feels more like a yoga studio than a circus school, but in truth Levity Academy is both. 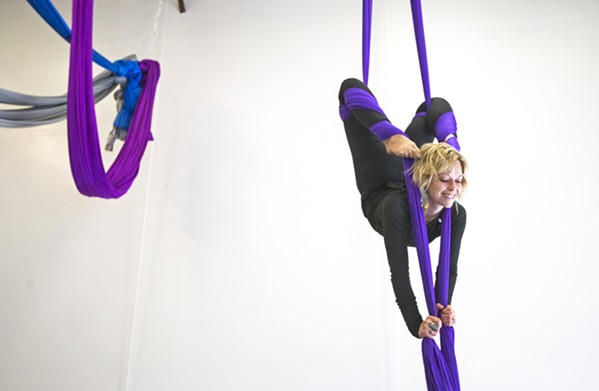 The aerial arts studio tucked away on the south end of town had a soft opening in April, but it's both old and new—the brain child of Gigi Penton, former co-owner of Suspended Motion Aerial Arts, and Lei Lei de Kirby, who has developed the Levity brand over a number of years as a performer and aerial yoga teacher trainer. When Penton's former partner at Suspended Motion moved to Utah, she and de Kirby saw an opportunity.

"It just made more sense to expand the Levity brand rather than make Suspended Motion into something that Levity already is," Penton said.

So the duo, who met at a festival in Bug Sur, moved their students out of World Rhythm and Motion Studio, where Suspended Motion had been renting space, and right next door into a spot that's all their own.

"As a person I'm very particular when it comes it comes to style, so really, Levity is just my personal style, you know wood, plants, clean, very clean, everything from the silks to the floors to the mirrors," de Kirby said. "It's just authentic to who I am. It's just an extension of my home." 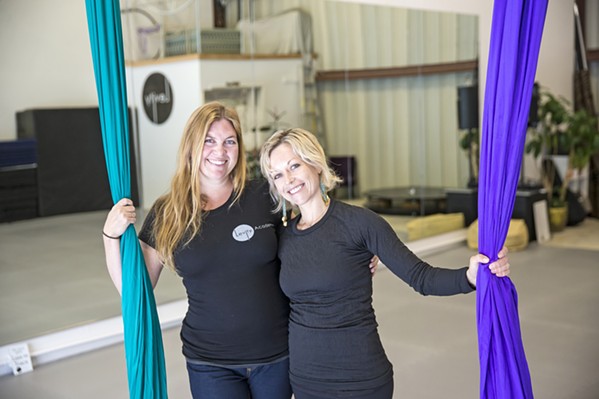 Aside from the new name and new space, what else has changed? Students can look forward to additions like a pre-professional program for kids and teens, an aerial yoga teacher training taught on the aerial hammock by de Kirby in September, and frequent workshops from artists outside the Central Coast who de Kirby has met and worked with in her international teaching and performing career. The duo also hopes to expand Cirque de Lorria, the studio's annual circus arts show that had its debut performance at Cal Poly's Spanos Theatre in March.

In addition to offering apparatuses like aerial silks, lyra, trapeze, and rope, Levity Academy also boasts more unusual offerings like a metal crescent moon, a cube, a sphere, a pyramid, a chandelier, and aerial ladders.

"What's your dream?" Penton said. "We may already have it."

In addition to having a staff of five aerial instructors, the studio also employs teacher assistants so that there are more eyes on the students hanging 20 or 30 feet up in the air.

While Penton and de Kirby are very much focused on growing their community in SLO, they do see the potential for Levity Academy to expand beyond the Central Coast, provided they find the right artist to partner and franchise with.

"It isn't just something where you decide 'I would like to open one of these,'" de Kirby said. "This person needs to be skilled in the craft, they need to be highly skilled in the art form and really dedicated to the growth of aerial arts in general. Aerial arts is a real crossover between aerial and dance. Aerial in SLO is more of a creative art form and of course high-flying, fantastic stuff." Δ

Arts Editor Ryah Cooley is hanging out at rcooley@newtimesslo.com.