I’m completely ensconced in silk, crouching hammock-style in a womb of soft, green fabric that connects to the ceiling, some 25 feet up. Concealed from the outside world, my body careens through space, slicing through the air like a weird wrecking ball. I feel like an alien pod or a blind flying squirrel.

Yes, I’m only a few feet off the ground—two, at most. But it feels electric. I have just savored a tiny taste of what it’s like to dabble in the aerial arts at SLO’s Suspended Motion Aerial Arts Academy. I watch as co-owner Gigi Penton’s 2-year-old daughter performs similar moves, only with more elegance and fluidity. Apparently, a dancer’s 17-month-old took to the silks just a few days ago (swaddled fabric, she cooed softly as she swung to and fro).

When I ask Penton what it means to dance on air like this, there is only one word that will do.

All around, dancers in spandex swing through the air on colored bands of fabric. With monkey-like agility, advanced dancer Jamie Relth wraps her leg around a fluttering purple silk and pulls herself up, up away and into the air—until she’s nearly touching the ceiling. Skill and technique keep her from plummeting to the ground—there are no wires, no nets. Getting into the air is a lot like the infamous P.E. rope climb. I ask if it takes a lot of upper body strength, skeptical of the claim that “anyone” can learn how to do this.

“It’s really all in the legs,” says Alex Milaychev, a former ballet dancer and gymnast. “In general, you have to have good upper and lower body strength, as well as core. As a ballet dancer, it translates well. I have awareness,
body form.” 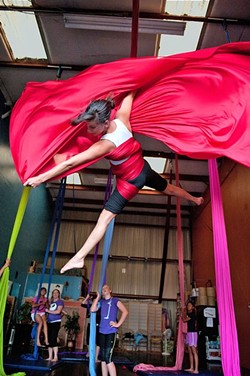 Before you get the wrong idea, I'll let you in on a little-known secret. Although plenty of aerial artists are former dancers, you don’t have to boast any background in twirling or leaping before exploring the world of silks. Being athletic helps, but it isn’t required (even I can do it, apparently). Every pose first takes place on the ground, and you spend weeks just working up to a few feet. As Penton says, “you start low and slow,” just like the best Southern barbecue.

“Once everyone has that same base knowledge and strength, you just skyrocket,” Penton said. “It’s so rewarding to watch students, and for them to see themselves go from 5 feet to 10 feet to 20 feet—doing things they never thought they could do a few weeks prior.”

Penton and studio co-owner Liz Stevenson grew up together at Morro Bay High School. They shared a love of dance—and a common trauma: being told they’d never be professional dancers.

“Traditional dance is very focused on beautiful, tall, thin dancers that have these gorgeous lines. Liz and I never had those lines. We were always good performers, [but] didn’t have the traditional body types,” Penton said.

As a result, the dancers and instructors are incredibly inclusive.

“I have a very strong belief that dance should be accessible and money shouldn’t be an issue,” Penton said. “If you walked in my door tonight, I would go through ground warm-up with you then get you over to the silk. We’d take you through the different moves in a hammock or a knot and give you base knowledge of how to be safe.”

Safety is big at the studio. It takes something like 22,000 pounds to rip the expensive silks, and the facility has been structurally fortified thanks to two certified riggers and a structural engineer (ongoing inspections occur regularly).

The dance troupe just finished up a summer concert series held at the studio, off Suburban Road in an unassuming area dotted with warehouses. Now, they’re working on choreographing an annual Halloween performance complete with spooky music and costumes. This year’s theme is “phobias,” and will feature high-flying spiders, freaky clowns, and even a shark (if Penton can figure out how to work that in).

“It’s like being on the playground when you are a little kid, totally joyful and fun and out of this world,” Relth said. “It’s like nothing else in your everyday life. I crave it. I want to be upside down all the time.”

Hayley Thomas is getting some air at hthomas@newtimesslo.com.