Make new friends and keep the old. McCarthy's new is as good as McCarthy's old. 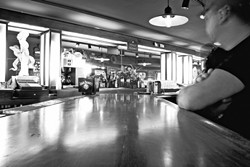 After being tucked away for 55 years in the secluded site at 1019 Court St., McCarthy's now serves as a virtual welcome mat to San Luis Obispo at its new location on the corner of Nipomo and Marsh streets.

Physically, things are a little different this time around at McCarthy's. As patrons enter the pub, they may be shocked by the sight of a shiny new floor and a spotless bar. New flat-screen monitors play sporting events. A lounge area takes up one corner. A new outdoor patio gives smokers the opportunity to inhale their cigarettes without having to leave their napkin-covered drinks on the bar inside.

Gone are the days of the stench of stale beer and the stained green carpet of the old site.

The shamrocks have been dusted off and the men's bathroom is graffiti free and no longer overlooks the creek, though owner Billy Hale plans to install a color photo of the old bathroom's creek view, replete with the torn metal grate that kept desperate patrons from reaching the change that other patrons tried to toss for good luck but that never made it past the window ledge.

But behind the long, dark-wood, L-shaped bar, it's business as usual.

A picture of the original owner of the pub, Joe McCarthy--clad in his professional wrestling gear during his days as the "Red Devil"--sits between the same etched-glass mirrors that have reflected some of the best drinking moments from the infamous bar in the past 60 years.

Picture catalogues of past McCarthy's St. Patrick's Day festivities cover the walls. The original door from the old location hangs inside. McCarthy's own shamrock now rests framed behind glass.

All of this history and tradition--combined with devoted regulars and friendly staff--have helped McCarthy's make a near seamless transition.

One McCarthy's long-time employee said that it was impossible to replace the old Court Street feel, but added that the pub's atmosphere will always be the same, no matter where the location.

Earthquake retrofitting and its accompanying rent hikes put McCarthy's on the move, which may have been a blessing in disguise.

The allure of McCarthy's has always been its unique social environment, where it's common to see construction workers and city councilmen shooting the shit over stiff cocktails and cheap beers. It's a place where you can always count on $2 cans of Tecate and drinks so strong they can make the most seasoned alcoholic shiver.

"It's family here, and we all care about each other," said DeAnn Trouter, known as the unofficial mother of McCarthy's. "We come down here to share a moment--not to have a drink. I can have a drink at home, but I don't drink at home. I do drink at McCarthy's."

In an expression of her affection for McCarthy's, Trouter recently had the pub's new address tattooed on her leg.

"I want to die having the autopsy guy saying, 'She really loved that bar,'" Trouter said. "At McCarthy's, we all love each other, we all care about each other, and we will have each other's back."

"It's a kind of a place where if you're a stranger, you walk in, sit down, and if you're not talking to someone within five or 10 minutes, something is wrong with you," Bender said. "It's still a place where you can come have a drink, be comfortable, feel safe and enjoy yourself, and meet new people."

On March 19, after McCarthy's served its last drink at the cherished Court Street spot, nearly 20 of the pub's faithful patrons lifted the original bar top over their heads and marched it down to the current location at 600 Marsh St.

Bender, who was working at the bar that day, went outside to watch the event. He forgot something at the pub and when he returned to get it, he noticed the McCarthy's neon light was still on.

"I've turned those lights off a bazillion times. But when I had to turn them off for the last time, that's when it hit. That was the saddest part," he said, his eyes watering.

But McCarthy's has a strong group of loyal regulars and a staff that will uphold the pub's values while laying the foundation for a successful future.

"The lights are back on and brighter than ever," Bender said. "McCarthy's is here forever."