What do a rooster, mermaid, umbrella, watermelon, shrimp, musician, spider, and cactus have in common? Each is an image depicted on a lotería card—a game much like bingo but most prevalently played in Mexico. The lotería cards are putting in an appearance at ARTS Space Obispo through Nov. 13 as part of the gallery’s annual Dia de los Muertos (Day of the Dead) celebration. Except that painter John Garcia y Robertson is putting his own twist on the centuries old game.

The artist began painting his own deck of cards on 2’ by 2’ canvases in 2002. So far he’s painted around 25 individual cards, and plans to paint another 25 or so. A traditional lotería deck contains 54 cards. The artist’s enthusiasm for a project that others might consider tedious makes sense almost immediately. The Santa Maria resident shows his work fairly irregularly, but past criticism leveled against his exhibits has included arguments to the effect that his style and content is scattered.

“People are used to seeing artists take a theme and do variations on that theme,” he admitted, frustrated by this expectation. “I get to paint different things in different styles but it still becomes a series. I tend to vary my style and sometimes even the materials. This series is more liberating that way.”

In fact, Garcia y Robertson didn’t even stick with the traditional card subjects. In a standard game, the card numbered 17 depicts El Bandolón—the mandolin. The painter’s number 17 is labeled Los Serpientes. Also on display are La Tristeza, El Café, La Conga, Las Mascaras, El Sombrero, La Silla, and El Avion. After selecting a subject to paint, he selects a style befitting the object, the ultimate goal being to elevate a simple object into an icon. Each has a story, a hook that inspired Garcia y Robertson—a doctor with a family, besides artist—to commit his time to each new effigy.

El Sombrero was inspired by a character in a Mexican film, an illiterate peasant who learned to write and read in order to write love letters to a woman of “superior birth.” He’s also happy to finally have the opportunity to display La Tristeza, the sadness, an image too heavy for the restaurants where he sometimes exhibits his work. The styles vary from representational to cubist, the aesthetic that inspired El Café.

“It’s a more harmonious view of our lives, that there’s not a huge chasm between the world of the living and the world of the dead,” he concluded. “It becomes a time for sharing of family traditions. Kids get a sense of continuity, where they fall in the parade of ancestors and loved ones. They’re a different spin on the same problem.”

Garcia y Robertson’s partner in escorting the dead into the world of the living is satirical painter Mark Bryan, a frequent guest at the Steynberg Gallery. Bryan’s paintings are dominated by skeletons (calacas), primarily because he thinks that skeletons are “just plain fun.” Plus, they’re always smiling. At least, the skeletons in his paintings wear a perpetual smirk.

Typically, Bryan starts off a painting with an idyllic landscape. Against this scene, crazed bunnies, jolly skeletons, and the occasional ballerina charge tanks through the hills and fling rockets. In the past year he’s cooled off the political commentary, slightly; he’s not ready to attack Obama. Yet. Instead, he’s turned to more personal subjects. His most recently completed piece, “The Grateful Dead,” is a near-exact replica of Norman Rockwell’s “Freedom From Want,” depicting a family sitting down to a Thanksgiving dinner. Except that Bryan’s family is, what else, grinning skeletons. The turkey also is painted as a skeleton. The pie on the table is a smiling skull.

“When I was in art school in L.A. I ended up sharing a studio with this Chicano artist. Through him I met a whole bunch of other Chicano artists. I was really influenced by them. They introduced me to the whole Mexican tradition of the murals,” Bryan explained of his fascination with the human figures, stripped of flesh and blood. 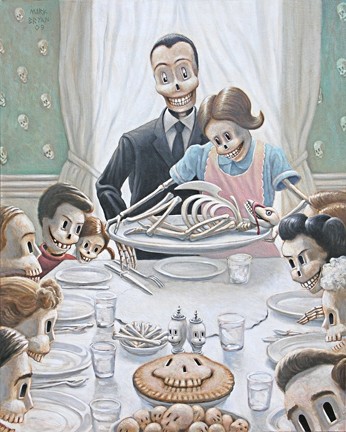 But Bryan contributed more than grinning skeletons to the effort. He created a game, not unlike a pinball machine, that invites the viewer to take part in that metaphysical tradition known as reincarnation. The game is equipped with three doors. A player can place a marble in any of the three doors. At the game’s center is a small platform decorated with an eye and image of Jesus; this is nirvana. At the bottom, Bryan pasted images of celebrities and politicians. Should the marble land in that slot, the player will be reincarnated as that figure. Every so often Bryan rotates the selection. Paris Hilton, George Bush, Barack Obama, Sarah Palin, Marilyn Monroe, Peewee Herman, and Che Guevara have all been in the rotation at one point or another.

According to Bryan, the idea for the game came to him in a dream.

“Jesus came to me and he had a big coat on, like those guys that sell watches on the street,” he began. Jesus had numerous keys, each with the name of a celebrity on it. He offered the selection to Bryan, who understood that whichever key he selected was the life he would be forced to live out. Instead, he chose his own and refused to accept a key.

Who needs reincarnation when you can visit the living and feast on sugar skulls one day out of each year?