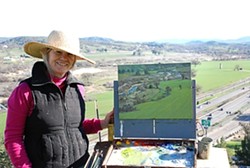 New Times How did Paso Robles Festival of the Arts come to be?

Barbara Partridge I am the retired director of library and recreation services for Paso Robles, where I worked for more than 30 years. I am on the Studios on the Park board—to help facilitate the studios’ and the city’s communication. They needed recognition by the city and we wanted a collaborative effort. That is where this idea for Paso Robles Festival of the Arts, a new event, in these tough economic times, and the benefactor would be the Studios on the Park and the Salinas River Corridor project.

New Times For those of us who don’t know about that project?

New Times What are you excited about with this event?

Partridge I am excited about this brand new event because it incorporates art, the environment, and brings downtown Paso Robles into the festival with the booths, the children’s activities, 63 artists from all over the country, stage performance, fine art classes for kids, concerts for adults, and the grand opening of Studios on the Park. We are also encouraging people to go out into the community and eat at the restaurants and pump money into downtown since our event is free and we aren’t serving food.

Anne Laddon Quick Draw art competitions are done all over the country but it’s a fun thing to do for us plein air painters. I’ve done them all over; probably more than 30. What happens is the artists participate in an art show, sometimes for up to two weeks, and it will culminate in a big show. For this competition the artists will paint something within an hour or two hours. They will be framed, and then auctioned off.

Laddon The public enjoys seeing something being created right before their eyes. It’s a fun thing to see a painting appear on a blank piece of canvas.

New Times Are people really buying these works of art at the end of the competition?

Laddon People love them, I mean, they don’t always turn out. It’s nerve-wracking for the artists. We as artists know how to build a painting, and if you pick something reasonably familiar to your own style you can do something nice in an hour and a half or two hours.

New Times What can’t I do as an artist?

Laddon They can paint whatever they want as long as they are painting within a two-block radius of the whistle blow. The public can watch while they’re painting.

New Times Who are “art angels?”

Laddon The volunteers who go around and make sure the artists have water and know how much time they have left.

New Times Who will be painting?

Laddon We have a lot of well known artists who are coming to do this Quick Draw. I am flattered and amazed at the same time that they have said yes to this. Deborah Huse, Gary Blackwell, and many local artists: Dotty Hawthorne, Peg Grady. She will do some wild collage, I’m sure. ∆