At 8 a.m. on Jan. 4, now former SLO Food Bank employee Kody Cava sent an email that would get him fired later that day.

The nearly 5,500 word message—titled "An open letter to our food banks regarding food equity" and also posted on Cava's Substack newsletter—criticized his employer's dependence on private donations to operate and how the Food Bank approaches food equity. 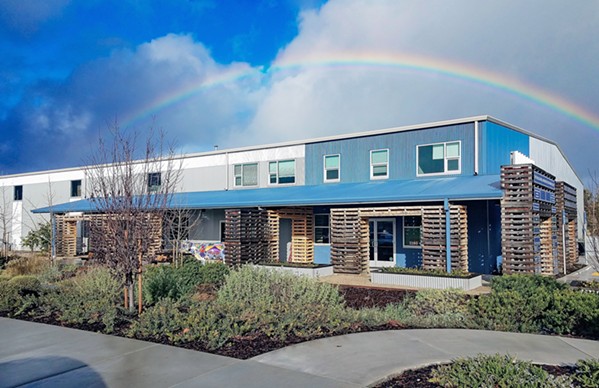 At first glance, the email looked like an official communication from the organization: It was written below SLO Food Bank letterhead, came from Cava's work email address, and was signed with his job title. But later that day, Food Bank CEO Garret Olson sent an email to community partners clarifying that the letter wasn't authorized and doesn't represent the official position of the SLO Food Bank.

Olson called Cava's letter a "violation of our well-established understanding of these rules."

Cava told New Times that he wrote the letter to encourage food banks "to speak out explicitly against the systems that bring people to our doors in the first place," something that, in his opinion, isn't happening at the SLO Food Bank.

"There has been a reticence on the part of the leadership and the board to really meaningfully grapple with the root causes of hunger," Cava said. "That kind of led to me and several other people who I work with, over the course of the last four months or so, [to] come to the realization that every time we would bring up these issues, they were suppressed."

Olson disagreed. He pointed to the Food Bank receiving a grant last year to study food equity and hiring a team member to focus on food equity, as evidence of the organization's commitment to addressing the issue.

"This effort is so critical to our organization that our board has agreed to push the development of our strategic plan back so it can incorporate the findings and data of our food equity study into our plan," Olson said in a written statement.

Cava noted that the Food Bank did start having monthly internal meetings to talk about food equity.

"It became clear to a group of us in the course of those conversations that there was kind of a divide in philosophy of what the proper role of the SLO Food Bank can be in the community in regards to addressing the root causes of hunger," Cava said. "Over the course of those meetings, there were even talks of discontinuing the meetings because they were becoming too contentious."

Cava alleged that at one point, his employment was threatened.

"As I was bringing up these issues of food equity and my concerns with the lack of accountability on the part of the leadership team and the board of directors, I was told by someone that I should not be doing this, and that I should just keep my head down because I'm likely to be fired by the CEO," Cava said in the afternoon of Jan. 4. "And, fun fact, just about an hour ago I was fired."

When asked about this allegation, Olson told New Times, "While I can't comment on any confidential employee personnel issues, I will share with you that if any supervisor made such a comment to any employee, that supervisor's actions would be addressed, as we seek to create an environment in which people do great work because they are inspired and supported to do so."

Despite the termination of his employment, Cava said he has received some positive feedback from his letter, which he sent to news outlets, nonprofit community organizations, and other anti-hunger organizations.

"I totally agree with Kody at the Food Bank in his stance on ending poverty and food insecurity, and at Hope's Village we try to do the same thing," Becky Jorgeson, founder of Hope's Village of SLO, said. "We look for partners, not just donors." Δ