Dinner With Friends is, in many ways, a predictable choice of plays for the Pewter Plough Playhouse. The quirky little theater 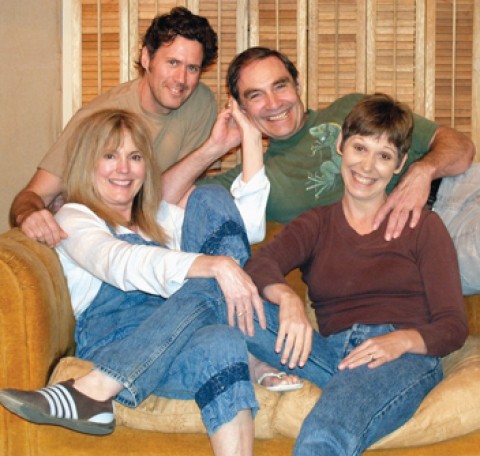 # and its opinionated owner, Jim Buckley, love tales of middle-aged couples. Then again, the story of Gabe and Karen and Beth and Tom isn't about the fumbling efforts of a mismatched pair rediscovering love. It's about falling out of love, settling, and refusing to settle. And in that respect it's a departure from the theater's standard fare.

The play opens, as the title suggests, with friends sharing dinner. Gabe and Karen enthusiastically regale their friend Beth with anecdotes from their recent trip to Italy specifically a visit to an elderly Italian woman with delicious produce. With that particular brand of arrogance only a foodie can display, they shower their friend with descriptions of tomatoes. The conversation is enjoyable, unexpected, and weird, with that slight ring of truth every good play requires. Little do they know that Beth is about to inform them that she and her husband Tom Karen and Gabe's best friends are in the process of separating. Karen's response to the news that Tom is having an affair with a stewardess ("That is so tacky!") is perfectly indicative of her well-meaning, off-beat personality, while Gabe's rational, accountant-like exposition of ways Beth and Tom can mend their marriage is the banner head for just how safe he wants his life to be.

The consequences of Tom and Beth's separation will play out not only in their home and relationship, but also in the lives of Karen and Gabe. The set for both houses consists of enclosed black walls and a small couch and table, inducing both intimacy and claustrophobia. The friends probably know too much about one another, probably rely too much on each other to affirm the lives they've chosen, and the too-intimate set with identical furniture for both homes expresses that.

Beyond the fact that couples are breaking up rather than getting together, the biggest shocker behind this choice of plays is how sexually explicit it manages to be. Writer Donald Margulies must have had a list of various ways to express marital dissatisfaction and talking about sex or rather, talking about how nobody seems to be having sex is at the top of the list. On the one hand, it's refreshingly shocking to hear Gabe declare to Beth that a particular act could have saved her whole marriage. On the other, much of what passes for dialogue about sex is tired it's people talking about sex to talk about sex rather than for the purpose of actually conveying an idea or thought. Writers often have their characters discuss sex because it's adult or because it's modern and they really have nothing else to say.

The first act felt somewhat weak, and I can pinpoint the exact second Margulies' writing disappointed me. In Beth and Tom's first scene together, the tension from their separation and Tom's concern about his friends' opinion of him escalates into a highly charged argument. The fight has a bit of a rocky start as Tom lingers un-humorously on the culinary details of Beth's dinner at Karen and Gabe's house. But then Dwain Edwards (Tom) completely lets loose and Lori Cunningham (Beth) isn't far behind as the two fling painful accusations at one another. As uncomfortable as the scenario is to watch, their intensity and unhappiness is riveting. And the entire time I was watching I was praying to the gods of theater that it wouldn't end in sex. Why, when situations become tense, charged, and violent, do writers think it's so comic for the scene to conclude in sex? People seem to find it funny and maybe it was the first time it happened, but if you've seen it on King of Queens or a soap opera, it really doesn't belong in a play that's trying to be genuinely clever, as most plays strive to be. Sure enough, one second Tom and Beth are the poster couple for a public service announcement about spousal abuse, and the next they're a Trojan condom ad. Needless to say, I was sorely disappointed.

My second complaint regarding the play concerns more of an annoyance than a disappointment. At several different points director John Battalino incorporates a tape of a child's voice, which the parents respond to. This isn't at all integral to the plot or character development, and it would have been more effective for the parents to pretend to hear their children calling them and leave the room rather than have a tape that sounds fake, not to mention cheesy. Both couples reference their children, making it completely unnecessary to emphasize their existence through the tape.

Thankfully, the second act took an unexpected and complex turn for the better. It begins with a flashback 12-and-a-half years before the events of the first act. Karen and Gabe then newlyweds discuss the possibility of a relationship between their friends Beth and Tom. Normally, I find these flashbacks disturbing. The actors are simply too old to play their much-younger selves. In fact, it was an extremely unbelievable flashback that ruined the Pewter Plough Playhouse's production of Panache for me. Fortunately, Gailee Walker has an ageless presence that makes the flashback bearable, if not plausible. Additionally, in the grand tradition of flashbacks to the golden beginnings of a relationship, the scene was supposed to make our hearts bleed for what Tom and Beth once had. Instead, I noted their polite disinterest in one another, the fact that Cunningham (Beth) and Edwards (Tom) radiated fondness for their friends, but nothing special toward one another. No bleeding hearts in this scene. Just a clear indication that maybe they married for the same reasons that so many people of a certain age marry: It's expected. Overall, it was a fresh take on the flashback.

Earlier in the play, the demise of Beth and Tom's marriage is referred to as a death a particularly apt observation, given that Karen and Gabe experience several stages of grief, including the anger and denial that generally accompany a serious loss. But as the second act progresses, the obviously doomed marriage is no longer the central relationship. Instead, this question of whether or not the marriage will end is replaced by a question as to whether individual friendships can survive that initial death. Beth, who can't cook and dedicates her life to making bad art, reveals that she harbors deep resentment toward Karen, the annoyingly perfect woman who always manages to outshine everyone else a fact made all the more annoying by the fact that Karen never makes a show of trying. Initially, Beth and Karen's friendship has every appearance of being the most warm, stable relationship you're going to see on that stage. But as Beth distances herself from the past by moving toward a new relationship, it's clear that a significant phase in the women's relationship has passed and they can never return. This is the relationship you bleed for, the realistic representation of what happens when two friends realize that all they share is a past.

Gabe and Tom trace the roots of their friendship all the way back to college, though they aren't as overtly affectionate as Beth and Karen. When Tom chooses a lifestyle that doesn't parallel Gabe's, they awkwardly agree to see one another soon, believing the entire time that their friendship has been wrung dry. All the audience is left with at the end is one self-satisfied culinary couple, several deaths, and a question: "Do practical matters have to outweigh abandon?"

I've never eaten a seven-course meal, but I imagine that if I did, some dishes would taste better than others. Such is the case with Dinner With Friends. A scintillating scent of reality every now and again compensates for the jokes and dialogue that come across as stale. And if you close your eyes to the corny fight-turned-sex scene and ignore the many references to castration, you may find yourself at the heart of an issue of great significance and relevance: The fact that relationships of all types are irrevocably intertwined.