Food for your ears 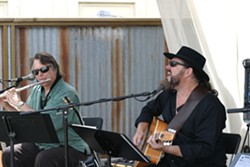 Dear Double Cheeseburgers, I still love you, but there’s a new love in my life, and it’s Sustenance. Sure, Cheesy, you taste good, but you’re an enabler. Our love affair has turned toxic. I’ll still see you once in a while, but Sustenance has shown me the error of my ways. I had no idea healthy could taste so good and be so easy! That’s why I haven’t seen you lately, Dub-Cheese—I’ve been hanging out at Sustenance.

Take last Sunday, April 18, for instance. While you only think about yourself, Sustenance was giving back to the community by hosting The Barflyz, an awesome jazz, rock, and blues quartet fronted by Steve Miller Band member Kenny Lee Lewis. A portion of the proceeds went to Hospice Partners of San Luis Obispo County. And what an awesome time we had!

Pompitus of love? What the hell? Doesn’t matter. Kenny Lee’s voice is awesome, and his utility guy Danny Pelfrey, who plays flute, sax, and guitar, is ripping it up. A while later Kenny Lee’s wife Diane Steinberg, who’s been delivering the groove grease on keys, rips into ZZ Top’s “Sharp Dressed Man,” while bassist Ken Hustad slaps his upright like a back-sassing teenager. Diane’s got more soul than a shoe factory!

Kenny Lee and Diane met back in 1975 and have been married since 1984. They moved to SLO a little more than three years ago—another famous and successful couple who could live anywhere but chose here. They’ve got a couple kids, a 22-year-old and a 13-year-old girl who attends Laguna Middle School, who according to Diane has a mind of her own.

“Thirteen? It’s going to get worse before it gets better,” I exclaim. 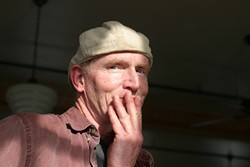 Then Sustenance worker Maya Andlig comes over to tell me a kid she met yesterday just got a Steve Miller Band tattoo on a dare—her dare! She told him she’d give him free Sustenance lunch for a year if he did.

Trevor Barrick shows me the fresh tat, inked onto his foot this morning. Does he regret it?

“No, not at all. It pretty much seemed like fun, and it’s obviously a conversation piece. Plus, I’ve got weirder tattoos than this,” he says, lifting the leg of his cutoff jeans to reveal a robot with an iPod face on a skateboard. 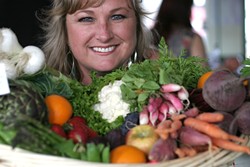 “Is he crazy?” I ask Trevor’s companion Rachel Zarillam.

“There’s a method to his madness,” she replies.

Speaking of Rachels, there’s Rachael Hill, and she’s got a big basket of fresh, locally grown veggies. And there’s Seamus Finn, Sustenance owner-operator. It’s a good gang of folks over here, where Seamus is building a community around good food, good friends, and today good music.

Sorry, Double Cheeseburger. It’s not me, it’s you.