“Do any of you know the three most important things to consider when opening a new restaurant?” Jean-Michel Jeudy, vice president of food and beverage at the California Culinary Academy, asked in his opening lecture to my freshman class. Scarcely drawing a breath, the impatient Frenchman answered his own question, surely assuming we plebes were too ignorant to possibly answer correctly: “Location, location, location. That is what matters most.” 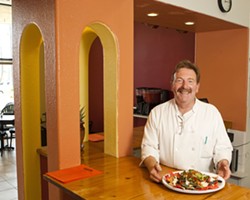 It’s been 25 years since I heard that important lesson during my first day of classical culinary training in May 1986. Although I’ll always recall that moment vividly, I could argue the subject with him today.

It’s still good advice for anyone considering opening a restaurant. I’ve written about Central Coast food and wine for 15 years. Over the years, I’ve interviewed many talented chefs who relocated here to open a restaurant in wine country—quite a few failed and then moved on. But we’ve had many brilliant chefs who succeeded and have remained popular among locals and the wine country visitors who expect to enjoy a fine dining experience. If a chef can open by hitting a home run, she or he could build a base of fans that would follow anywhere in the county.

Take chef Maegen Loring, for example: The struggling economy forced the closure of her upscale Park restaurant in SLO, but soon afterward she opened the casual Neon Carrot in a nondescript strip mall on South Higuera. Now, she’s busier than ever before, because locals respect her for providing quality at value prices. Chef Rick’s in Orcutt, open since 1989, is another prime example. Although his eatery seems hidden away—not quite in Old Orcutt nor in Santa Maria—it’s been a favorite among locals and celebrities like Martha Stewart, Tom Petty, Metallica, and the late Robert Mondavi.

Similarly, chef Doug Simpson and his brother Lance Simpson opened their first Alphy’s Broiler in a shopping center in Arroyo Grande seven years ago. It’s been very successful in the South County. In July, the Simpsons opened Alphy’s coffee shop, serving Cambria Coffee Roasting Co. coffee and espresso, pastries, and desserts. The Simpsons have always prided themselves on making most of their foods from scratch, and in supporting local suppliers.

Now they’ve opened a new restaurant, Alphy’s Adobe Grill in Pismo Beach, where I live. When I visited on the third and fifth day after it opened, there was already a steady stream of customers lining up. Admittedly, I was eager to check it out because I favorably reviewed Alphy’s Broiler five years earlier.

Talk about hidden away in the corner: The grill is located near Scolari’s in a spot my instructor would have cited as the model of a bad location. It was previously a Mexican restaurant, and then a barbecue joint, and neither one drew much business. It appears that Alphy’s broad base of South County fans has changed the mojo at this formerly jinxed location. Like the first Alphy’s, you order at the counter, and the food is delivered to your table. My first visit was with my friend Peggy Bojduj, an aerobics instructor at Kennedy Fitness Center. She’s picky due to dietary restrictions. Alphy’s menu offers a nice array of choices with healthy options, and it’s small enough to keep the foods they serve fresh and delicious.

Peggy ordered the Orient Express salad ($7.95), which is also popular at Alphy’s Broiler. It’s served in a huge bowl filled with freshly shredded red and green cabbage, scallions, cilantro, toasted sliced almonds, shredded carrots, grilled chicken, won ton crisps, and sesame ginger vinaigrette. She ordered dressing on the side, of course, adding it only as needed, and it was a delicious combo of crunch and flavor. 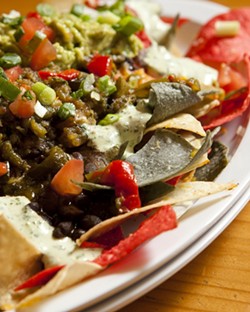 I ordered the Southwestern avocado and black bean salad ($7.95), also a huge bowl filled with generous amounts of chopped romaine lettuce, tomatoes, cilantro, red onion, jack cheese, avocado, roasted corn, and black beans. It’s all tossed in a delicious chipotle lime vinaigrette. It was similar to my homemade version, and I must admit, I wished I had ordered a side of chicken on it.

Although the wait was long—diners around us were complaining aloud about that—we agreed the food was worth it. We both found the crispy sweet-potato fries ($2.95) a decadent treat. The shop only offered soft drinks and coffee, the coffee beans from Cambria Coffee Roasting Company.

Two days later, I ordered several selections for a better taste of Simpson’s cooking style: The green chili chicken coop ($8.95), my favorite so far, offers a grilled 6-oz. chicken breast with green chili sauce, jack and cheddar cheese, lettuce, tomato, red onion, and chipotle aioli—it’s like eating a great cheeseburger made healthier by substituting skinless chicken breast. It’s served with good, crispy French fries dusted with Southwestern spices. The naked tamales (two for $5.95) come with several choices of toppings and sauces. I chose the tender carnitas ($2) and the spicy-hot adobo sauce. I actually preferred mixing the spicy hot meat and sauce with the black beans it came with, as opposed to the overly dense masa. Tamale toppings include shrimp, chicken, carne asada, or sautéed vegetables, ranging from $1.50 to $2.50 each.

Breaking my usual routine, I visited Alphy’s Adobe when it had barely been open a week, and it’s clear they’re on a learning curve at this new location. The chef cooks everything to order, even the tri-colored corn tortilla chips for an order of chips and guacamole, and he’s cooking alone, so the wait is way longer than expected. But, like I said during my first visit, the food is worth waiting for, and that’s sure to keep the broad base of fans coming back for more.