For public consumption: Two years in, the cottage food act is a hit

To make a Doughkie (pronounced doe-key), first grind the almonds—a coarse grind, not too consistent. Mix the meal with honey, vanilla, cocoa powder, carob, and a few other key ingredients, then weigh out each Doughkie portion and roll it into a log. Finally, put the dough in a round doughnut-shaped mold and bake it. The result is a cookie shaped like a doughnut, specially designed for people who love mash-ups, and for people with a litany of food allergies.

Carol Radike packages them in her kitchen and personally drives them to a handful of local stores to sell. Radike is just one of many local vendors who produce and package food in their home under the cottage foods act. It may not sound like a revelation, but before the act went into effect in January 2013, Radike would have needed to rent a commercial kitchen, a formality that could have kept Doughkies from ever making it to the grocer’s shelf.

The California Homemade Food Act (AB 1616) set out to address two problems: urban food deserts and the high financial barrier to starting a food-related business. The bill’s author, Assembly Member Mike Gatto (D-Glendale), hoped communities which lacked access to healthy food, would gain more options—fresh, local, homemade food. It’s unclear how the well the first goal has been met, but on the second count, the cottage foods act has been a hit. For would-be entrepreneurs, the bill created a simple application and inspection process that made it relatively painless to start making and selling food. For bakers like Radike, whose market is rather niche, the bill allowed her flexibility. Radike’s cookies are gluten-free, egg-free, and dairy- and GMO-free. Finding a kitchen that was all those things too was a nightmare.

“I thought if I really want to do this I am going to have to build a commercial kitchen,” Radike said. “So this really saved me and allowed me to do it on my own terms.”

Radike, who’s also a stay-at-home mom, said she’s been able to make mistakes and learn from them in a low-risk environment, and the low cost of getting off the ground allowed her to start small and grow slowly. 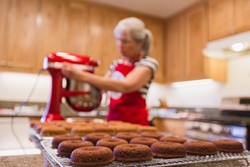 “For me this is part time,” Radike said. “I am a mom and a wife, but the hours are growing, and I am loving every minute of it because I’m learning so much.”

In 2013, when the bill went into effect, SLO County issued 56 cottage food licenses. Thirty of them were Class A, allowing the entrepreneurs to sell their product directly or in stores. The other 20 licensees were Class B, which are for direct sales only. The bill allows people to work from an approved home kitchen if they make less than $50,000 in sales.

Schmitt said those products range from fresh pastries to teas, and even include Doughkies.

Currently there’s a list of about 30 types of approved foods that are described as “non-potentially hazardous.” The list includes dried fruit and nuts, oils, mustard, high acid canned foods, and baked goods without cream or meat fillings—foods that don’t spoil or promote rapid bacteria growth.

The bill has been so successful that the UC Cooperative Extension started a series of workshops to help people with the food safety aspect. UC Extension specialist Katherine Soule is hosting a workshop in SLO on June 15 to address health and safety as well as legal issues. In an email, Soule said the response to these workshops across the state has been huge, and the variety of products she’s seen is surprising—everything from eggless marshmallows to veggie chips.

“There are so many fun possibilities on the approved food products list that allow cottage food operators to make a truly unique product! I personally love salted caramels,” she wrote.