Recording music is a tedious business that happens out of the public's eye, but after the music is recorded, mixed, and mastered, the idea is that people will hear it. For a lot of musicians, however, the most difficult part of the process is getting their sounds to eager ears—it's especially hard if you're a musician who doesn't really play much in public.

In our vibrant music scene, local songwriters are releasing amazing CDs all the time, and if they're playing a live show, New Times is here to write a review and let people know where they can see them.

We've had some incredible releases this year already. Atascadero resident Jon Bartel and his band Creston Line with their Fool's Gold release ("Americana poet," May 9) comes to mind, as does Cayucos resident Phil Lee and his new CD Phil Lee & The Horse He Rode in On ("One of a Kind," April 4), both of which New Times covered, and both of which are available at local retailer Boo Boo Records and online.

This story—or rather, three stories—is about local musicians with terrific CDs who you won't see play album release shows, but these new albums are every bit as worthy of your listening as Bartel's and Lee's.

Out of Neil Young's shadow

Atascadero resident Ralph Molina is best known as the drummer for Crazy Horse, a band formed in 1962 as vocal doo-wop group Danny & the Memories that eventually changed its name to Crazy Horse in 1969, and went on to record 11 studio albums as well as numerous live albums with Neil Young, from Everybody Knows This Is Nowhere (1969) to Psychedelic Pill (2012). What people don't know is that Molina has a beautiful voice and writes lovely pop songs.

In March of this year, at the ripe age of 74 (he turned 75 on June 22), Molina released Love & Inspiration, his debut collection of 11 original compositions, but he has no plans to perform the songs live or promote his album.

"I'm a drummer," he explained, "and I put all my time into everybody else's music. That's why it took me so long to record this. I told Neil, 'I've spent years doing your music. Now I'm going to do mine.'"

Molina actually started as a singer, performing doo-wop in groups in New York and later Florida. In fact, he sang harmonies in Danny & the Memories before they eventually morphed into a folk-rock act called The Psyrcle and later The Rockets before becoming Crazy Horse. Basically, Molina became a drummer "because all the other instruments were taken." 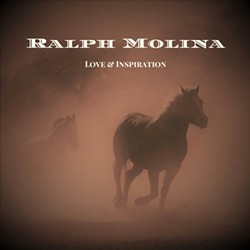 "When I sit down, the melody comes first," Molina explained. "Once I get a first verse then I know where the song is going. I write songs for people to relate to. I don't want people to have to decipher what I'm writing. I just love love songs. I think women are my audience."

In his high falsetto backed with sparse yet lush instrumentation, the CD is the perfect album to put on during a quiet rainy afternoon. It's also cool to see all the photos in the liner notes—a reminder of his five-plus-decade career in music. Plus, he's got a lot of awesome guest musicians on the disc!

You can buy Love & Inspiration at ralph.molina@bandcamp.com or through his website, ralphmolina.net. In case you're wondering, Molina and Crazy Horse continue to play and tour with Neil Young because rust never sleeps.

SLO Town resident Derek Senn is a full-time commercial real estate agent and father of two young, very active boys. He's also funny as hell, and sometimes I think he writes songs for the sole purpose of busting his wife's chops, like the title track to his new CD How Could A Man, whose cover features a photo of his then very pregnant wife, Melanie.

"She's a yogi/ She's a reader/ She's an unapologetic eater/ a carnivore poor pigs cows and chickens// She's even-keeled until crossed/ that's when dishes get tossed// Don't bequeath your fine China to her// She's a laundress/ She's a gourmet chef/ An EMT, she won't shy away/ She'll suture cuts/ She'll pick a tick right off your nuts/ If you puke your guts out she's there to console you."

Senn's delivery and song cadence is 100 percent original, and he sets up crazy rhymes like "skin" with "fallopian": "She's got perfect skin/ and when her fallopian/ tubes were tied God cried a tear." Then the song flows into the chorus: "And how could a man not fall completely" sung three times without ever finishing the thought until the song's end, "in love."

Senn, 47, didn't really get serious about music until his 30s, but since then he's written three really amazing full-length albums, each worth owning—Technological Breakthrough, Avuncular, and now this one. Since its release, he's done a little show at Kreuzberg, a four-song set at a Songwriters at Play showcase, and an 8 a.m. slot at last week's Live Oak Music Festival, and that's a lot for him! He hopes to play more, but with a family and a full-time job, when?

When he's not in his basement studio writing and recording, he's in front of the computer trying to figure out how to get his music into the hands of people who might want it. He's had, for instance, some luck getting reviewed overseas.

"I guess the Brits understand me better," he laughed. "I have to do all my own hustling, and I've found a few places that are willing to listen to CDs from unheralded artists."

In one case, another local musician, Patrick Hayes of the Dead Volts and Twang N Bang Records, put him in touch with the right person to get a review in No Depression: The Journal of Roots Music. Senn also discovered submithub.com, which helps musicians connect with music bloggers to get online reviews ... for a price. Musicians buy dollar tokens, and for between $1 and $3 a blogger will listen and respond to your song within 48 hours with a yea or nay about blogging the tune.

"I bought $100 worth of tokens," Senn said, "and had about a 10 percent approval. Not bad. I've also got my music on Bandcamp and Spotify, but I can sell one CD and make more money than what I earn on Spotify in two years. I figured it out, and 1 million Spotify listens in one year equals about $4,000. If you're doing all this shit yourself, it's like a whole other full-time job keeping up with Spotify, Bandcamp, album artwork, soliciting reviews—I spend a lot of time going down Internet rabbit holes.

"I used to send CDs with handwritten notes to radio stations all over the country. I realized it's a total waste of time," he continued. "[Local NPR affiliate] KCBX [90.1 FM] plays me sometimes, but that's because I've developed personal relationships with some of the DJs."

This is the end

If you're listening to SLO Town resident Chris O'Connell, 60, playing live music, you're going to die soon. O'Connell's full-time job is playing music for dying people in the care of Wilshire Hospice. O'Connell pioneered the use of live music for hospice patients on the Central Coast, first as a volunteer, but it was so successful it developed into a full-time thing.

"Basically, I see four to six patients a day," O'Connell said. "It's beautiful work, and it's also very challenging work."

O'Connell was the Morning Cup of Jazz DJ on KCBX for many years, and he played with percussionist and singer Timo Beckwith in a band called Human-Human for a while too. He'd probably play live more, but he's only got so much voice.

"The work I do for hospice is vocally demanding, and I don't have a naturally strong voice," O'Connell said. "So basically, by the end of the week I often need to rest my voice. When I stop doing the hospice work, I will start gigging and singing in public again."

His new CD, Such Thin Wire, is available on CD Baby and Amazon.

"The title is an image, a metaphor," he added. "It's one way to imagine the resilient but fragile force that binds us and connects us to one another and to this life."

Many of the songs are informed and inspired by his hospice work, but not all. One that particularly struck me was "Come Away": "Come away with me/ The night is waiting, I will set you free/ Come enter this Mystery// The secrets of your fate/ Are etched on your face, in your heart/ Your soul's weight/ Has made you a work of art// It's time to let go/ Yield to the current of the Deeper Flow/ Some things you will never know."

"That's a song about reimagining death in contrast to the cultural image of the Grim Reaper," O'Connell explained. "It seems like death is either sensationalized in this horrific way or it's sentimentalized. So this is a reimagining of death as a lover coming for his beloved, so the image that I had when I wrote that song was of a groom carrying a bride across the threshold from life to death." 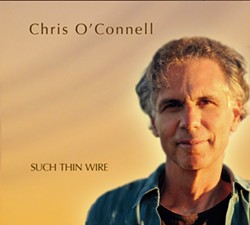 Likewise, the song "Dabada" is also about his experience witnessing the great transition from life to death.

"It's about sitting in the ashes with someone," O'Connell said. "A lot of what we do in hospice is just being present. Can you be present to someone who's suffering? It's not about trying to make it better, per se, or trying to take away the spiritual or emotional pain. It's more about honoring that pain. Someone is in a state of intense grief and loss, losing the ability to do what they've done, entering the state where they can see they're moving toward the unknown."

What's especially interesting about Such Thin Wire is how uplifting and rejuvenating it feels. It's clear that O'Connell considers his hospice work an honor. He witnesses sacred and profound moments on a daily basis. Ultimately, to survive such deep emotions, he's found the beauty in death, and he's poured that understanding into this gorgeous CD. Δ