For the owner of Central Coast Brewing in SLO, raising money for ALS research is personal

George Peterson, owner and founder of Central Coast Brewing, took some pride in telling me that he was one of three SLO county breweries to join the national campaign for ALS (Lou Gehrig's Disease) research: Ales for ALS.

I shared a brew with Peterson and Stormy Trevino, director of sales and distribution for Central Coast Brewing (CCB), on the front outdoor patio of their busy, busy 1-year-old tap room and 12,000-square-foot brewhouse facility (former home of San Luis Motorsports) and restaurant on Higuera on a recent Tuesday evening. I was on a mission to try the beer with the F-word in its name. 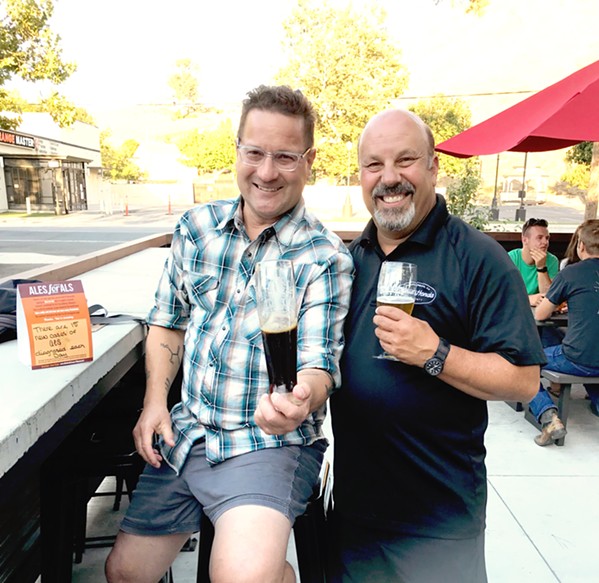 At 6 p.m., the tables were already hopping with a friendly, local beer congregation—young and old, groups and couples—nibbling on gourmet pub fare like the Sriracha burger and Philly cheesesteak pizza, sipping on one of CCB's endless choices of drafts.

A young local named Jeff Stein from Bay Laurel Nursery pulled up next to us, and, "seemingly" unaware that I was writing a column on Ales for ALS, he asked Peterson and Trevino for one of those "ALS beers." He was nowhere near the bar. "I'm making my donation," Stein said, later walking off with a crowler.

"Did you guys ask him to say that?" I laughed.

Those two goofballs were totally up to something. Peterson, still in his black Sunset Honda polo shirt, his bright, wide eyes peeking out from the rim of a brew, denied anything mischievous. "We did not plan him, nope!" Trevino insisted.

I was asking Peterson about all the work Central Coast Brewing has done to raise money for ALS, and he and Trevino were having some fun kidding around and pouring me their house-crafted beer named "F&*% ALS" for Ales for ALS.

One dollar from every pint brewed goes to the ALS Therapy Development Institute (ALS TDI), a nonprofit biotech-focused research center working for treatments and a cure for ALS. 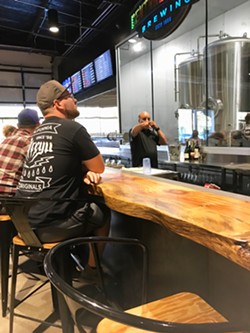 I was sobered to learn that Peterson's dear friend Don Woodward had died of the disease in 2010.

"There are 15 new cases of ALS diagnosed each day," the little CCB cardboard table sign reads. According to the ALS Association, roughly 16,000 Americans have the progressive neurological disease at any given time. Notable individuals who have been diagnosed with ALS include the famous baseball player Lou Gehrig and theoretical physicist Stephen Hawking.

For Peterson's friend, whose parents owned Sunset Honda in SLO and was next in line to take over the business, ALS came as a complete surprise. Woodward was an excellent golfer, but he was hitting the ball "a little shorter," Peterson remembered. He had some pain and tingling in his neck and back from what he thought was due to a car accident, and went in for neck surgery at UC San Francisco.

But just before surgery one of the doctors looked closer at Woodward and found that the pain was worse than they thought and could not be taken care of by surgery. It was, they found instead, late onset ALS. That same day Woodward was told to get his affairs in order. The disease takes over the body like a tsunami, and the prognosis is dire.

"It was just catastrophic," Peterson said. "We are the same age, just two months apart."

Woodward was 46 when ALS took his life, only 17 months after the diagnosis at UCSF.

"He was San Luis High, CIF champion, Utah [U of Utah] football ... yeah, he was the guy," Peterson said. "You couldn't go anywhere without someone sayin', 'Hey Donnie, how's it goin'?'"

The Ales for ALS campaign began in 2013, when a Yakima Valley hop farming family decided to raise funds and awareness for ALS. Each year their hop farm donates a unique blend of primarily "experimental" hops to participating breweries across the country, asking the breweries to donate their dollar per pint brewed back to ALS TDI.

This year, more than 200 breweries worldwide participated in brewing their own hand-crafted beer to best showcase this year's special blend of hops.

Trevino, who I learned is a bit of a beer nerd (in the complimentary sense of the word, of course), just returned from Munich, where he visited hops farms to examine the goods. He said CCB Master Brewer Brendan Gough decided to produce an IPA from the hops they were given for the fundraiser, which apparently was not the typical choice of the other brewmasters. Supporters of the cause can order the beer at either one of CCB's SLO taprooms, and they are also selling it to their wholesale distribution network. The Ales for ALS beer, which Peterson served me chilled in a Pilsner glass, is a moderately strong pale ale that tasted delicious and refreshing, especially after I'd been in 109-degree Atascadero weather all day.

Here's the other thing I just adore about Central Coast Brewing beers: the nose. The "F&*% ALS" smells like pineapple and Mary Jane bud. First of all, I checked with Peterson and Trevino—it's perfectly normal in beer land to call that fresh beer scent the "nose" ... just like wine. And I'm not the only one to compare beer flavor to pot.

The guys told me they are meticulously vigilant in protecting the freshness of their brews. They won't allow the stores that carry Central Coast Brewing beers to keep them too long, and they insist that the wonderful nose is the result of being sticklers about freshness.

Speaking of love, the new location on Higuera has a huggable, quirky personality. Located across from a gun shop (which Peterson says makes awesome neighbors), almost hidden from downtown, and adjacent to the San Luis Cemetery—the location works. Trevino and Peterson showed me a missing board between the beer garden and cemetery.

"That's where the ghosts come in," they told me.

See what I mean?

In July the Central Coast Brewing team took part in the 50 brewery kickoff for Ales for ALS at Faction Brewing in Alameda, which was their third return to the fundraising effort, and they've already signed up for next year's fundraiser. There they debuted the "F&*% ALS" IPA—so named to make it abundantly clear that they are ready for a cure already.

Trevino said that among the thousands who attended the event, it was difficult and eye-opening to see some of their beer customers in electric wheelchairs who were stricken with the disease. He was shocked to see people in their 20s with ALS. Some had to use computer screens to communicate.

"We saw people at all levels," Trevino said. "We saw some who were recently stricken, in a wheelchair. But they could use their hands, and were able to communicate, but couldn't walk, and others who couldn't move their hands and arms ... and others who had lost all of that. Just eye movement. That was it."

For whatever reason and whenever you try the "F&*% ALS" for yourself, raise a glass to Peterson's late friend, Don Woodward. Δ

New Times contributor Beth Giuffre is raising a Pilsner glass for all the noble causes. Send contributions to bgiuffre@newtimesslo.com.